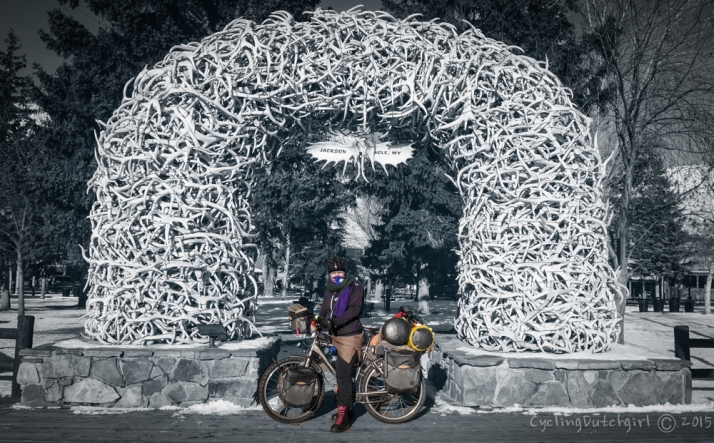 Good thing I ran into Brian & Hannah the day before and they had invited me to stay,

they’re no strangers to bicycle touring and it was lovely to spend an evening with like-minded folk.

That morning was the first time since Northern Canada that I stepped out the door, breathed in deeply, and felt my nose hairs freeze instantly.

And I happily headed north.

“North? “You might say… “shouldn’t you be heading South?”

Yes I should. But I just got this pull that keeps directing me north.

So off I went, towards the big tits. No really! That is the name of these mountains.

Well ‘Grand Tetons’  But that’s the same, just in another language.

It was beautiful and a little chilly, I was real happy Arlen in Missoula had given me his studded tires,

Two girls pulled over, jumped out the car and asked where I was planning to camp that night,

both rangers in Yellowstone they were very familiar with the area and big into anything outdoors.

Elizabeth lives on the lake and invited me to stay at her place.

Worried I might get cold they made sure I had enough food, a brand new balaclava and a pair of warm socks!

My feet sure are suffering the most when it gets colder, but then my friend Charlie the Bikemonger came up with a wonderful plan!

He made sure I received a gorgeous pair of biking boots that have been keeping my feet toasty ever since. 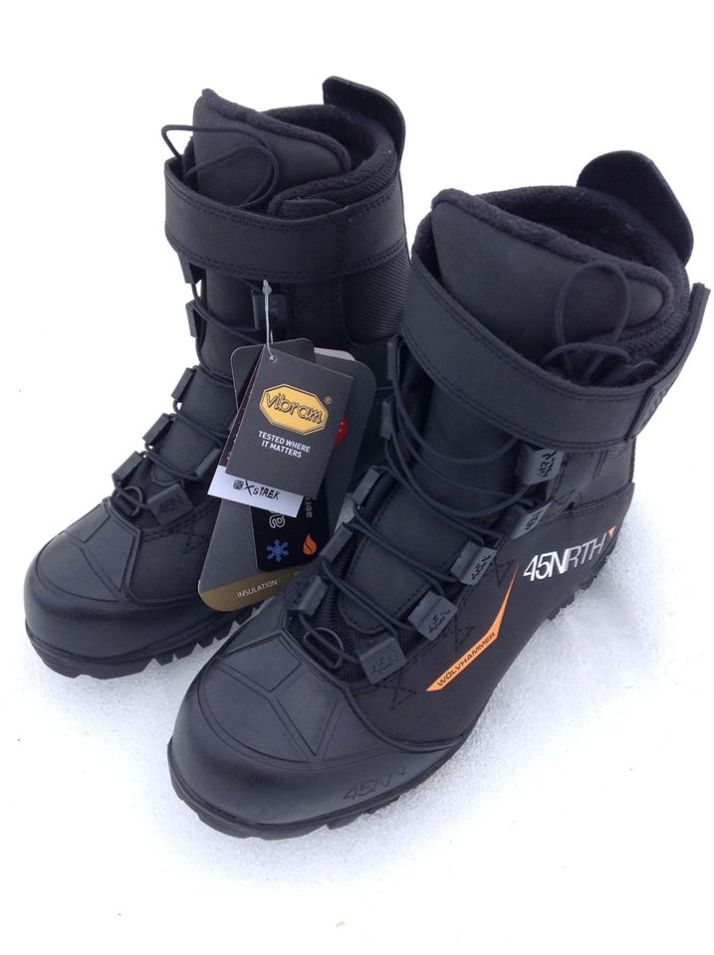 There was a nice hill to ride over from Elizabeth’s place,

A car stopped and it turned out Paul had a drone, he shot this footage of me riding along;

His friend Sava took some pictures,

I had a break at the Togwotee lodge,

it was closed but that didn’t stop me enjoy the sunshine for a while. 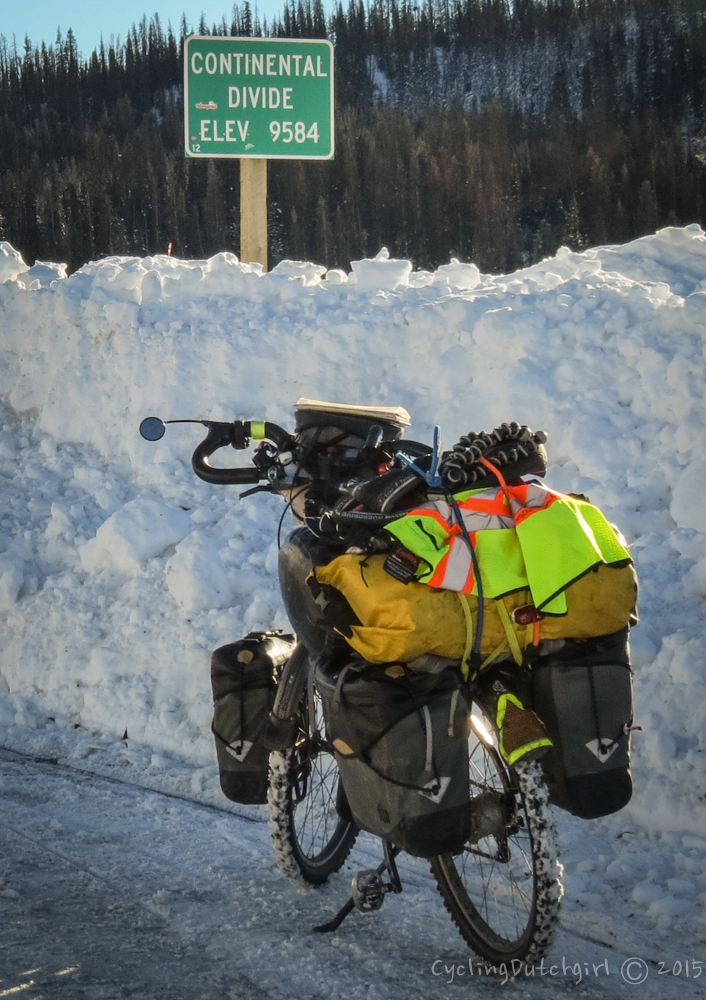 After reaching the top it was a lovely ride down the other side. 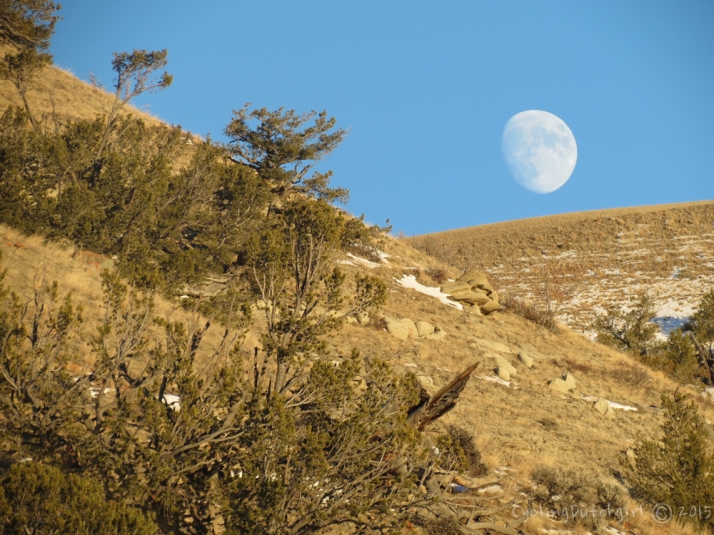 The scenery changed dramatically, the snow all disappeared and instead there were big rocks and climbing cows.

My goal had been Dubois, as a friendly fella (Hi Kevin!) in Jackson hole had put me in touch with a friend of his there.

I cruised into town just after sunset and figured I might as well ask somebody if they knew Leon, the first person I ran into happened to be Leon. He showed me his ‘man shack’. 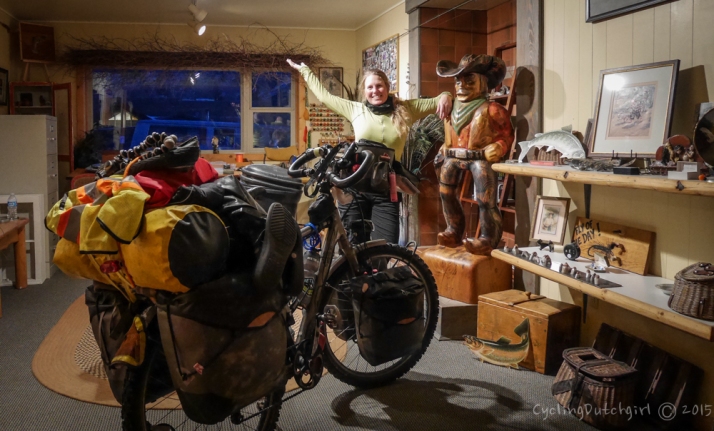 He runs a fishing outfit in town and this is where his guides would usually stay, but now I had the whole place to myself.

When I set off the next day my wheel felt a little weird.

And not just because I was still riding my studded tires on this dry road. 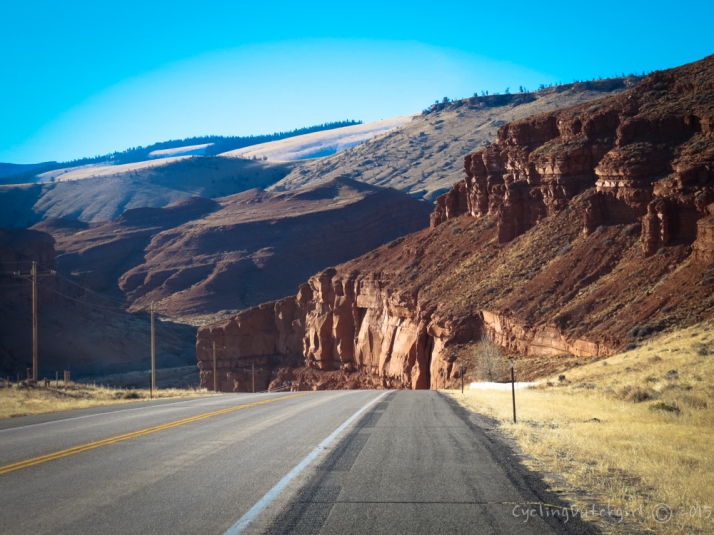 I noticed I had a cracked rim. Darn.

When I found out I was right next to Ben’s place, he carves stuff out of antlers and gave me this little one to stick on my bag. 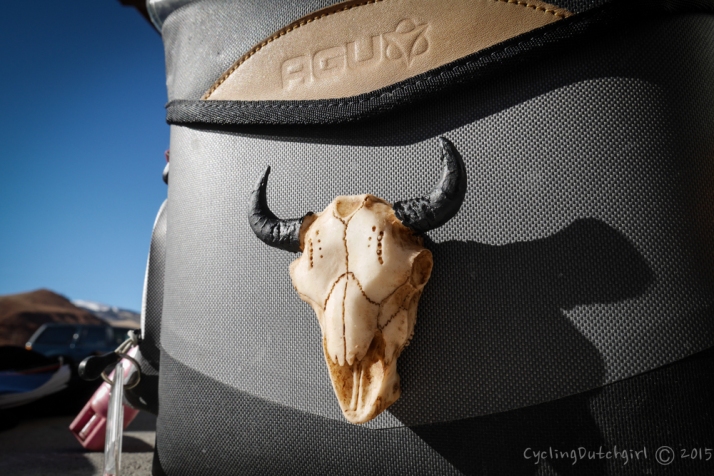 nobody would ever guess I’m not from ’round here now!

I managed to wobble my way out to Lander.

Where  I had it real tough at Chuck & Lora’s place 😉 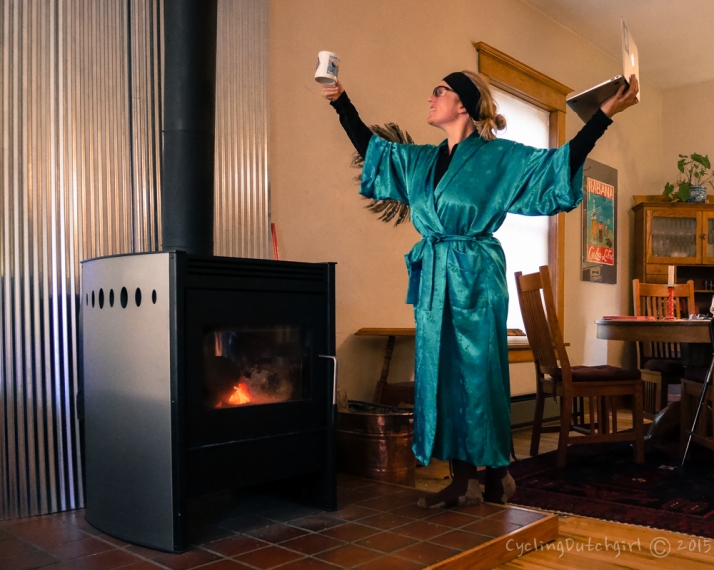 The hospitality out here is just unbelievable!

(For example, right now I am in a coffee shop and the girl behind the counter will not let me pay for my coffee)

At this moment I had no good back wheel and no brakes either, so I hung out at Lander’s great Bike Store for a while and came up with a plan.

I would order the parts I need, have a little vacation, build my wheel, and keep on riding.

And this is exactly what I did.

My vacation was lovely. Can you guess where I went…? 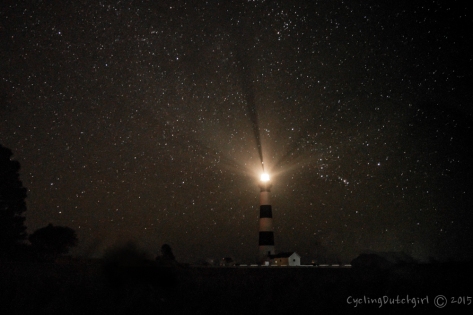 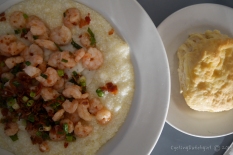 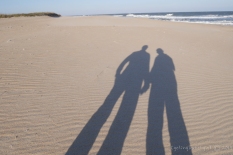 hint: I had to cross a bridge and there was no snow.

Bob and Fiona live with their family just south of Denver.

Both Bob and his daughter Bronwyn work for the Adventure cycling organisation. I had met him in Missoula before.

My timing was perfect as I had never had a real American Thanksgiving before.

So we fixed that. 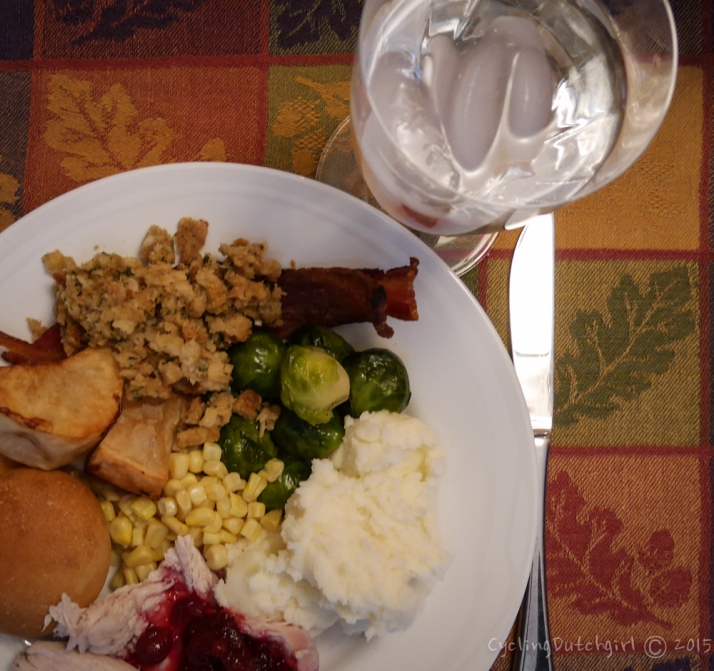 I also happened to be at their house on my Birthday, I even got a cake!

But once I finished putting all the pieces of my bicycle back together (I built my own wheel!)

it was time to find some hills.

I changed my tires too, I took off the studs and got a pair of Continental Winter tires.

I was a little sceptical about using them as I didn’t feel as secure on ice as with studded tires, but they have pleasantly surprised me!

I felt a little scared at first but quickly realised they’re really great!

Especially if the road condition changes a lot.

Heading out of town along the aptly named Deer Creek Canyon, 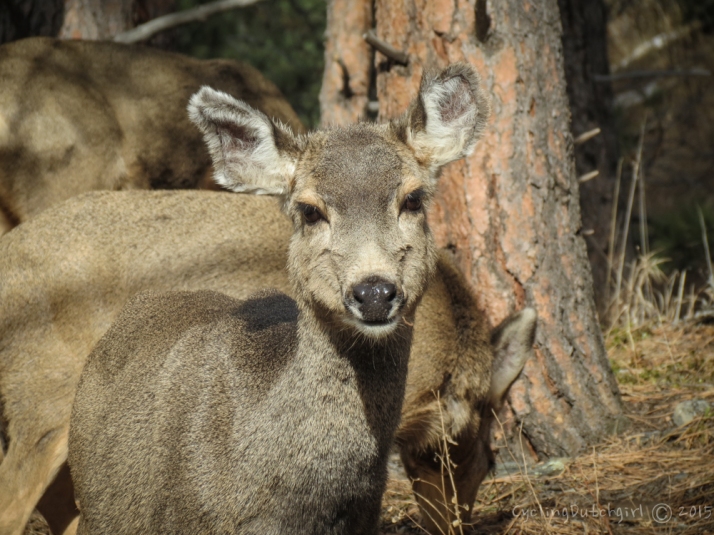 I ran into this adorable family,

I think their little girl might set out on her own bike one day, she already seems to like maps as much as I do!

I only realised after I left I never got any contact details! So guys, if you happen to read this, please send me a message!

Annika, who also happens to be a hairdresser, cut my hair, that hasn’t happened in years! I feel very lady-like now.

Then came the headwinds. This road looks peaceful in the picture, 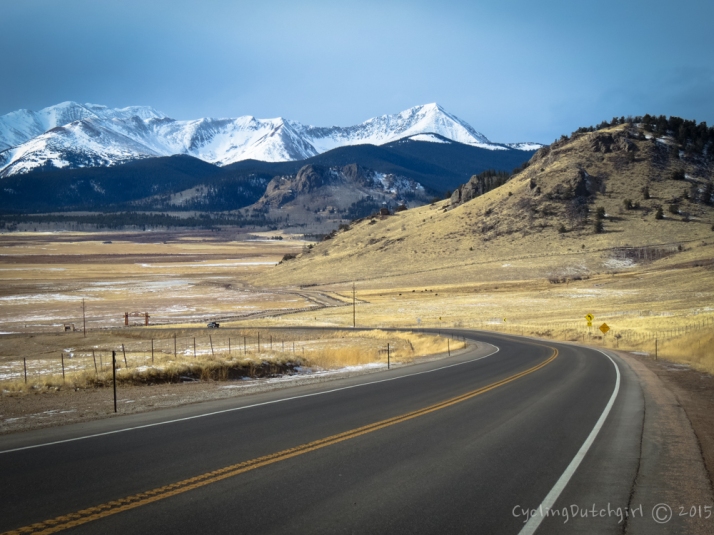 But it was brutal alright!

Specially with hardly any shoulder. There was an amazingly large volume of traffic wanting to go in my direction. Every time a vehicle passed me I was all over the road. Not funny.

Later I heard it’s about the deadliest road in Colorado, I could see why. I will not recommend anyone to ride the 285.

In fact, I skipped a bit and got a ride a little further down the way where I pitched my tent on a perfectly clear evening and woke up to this; 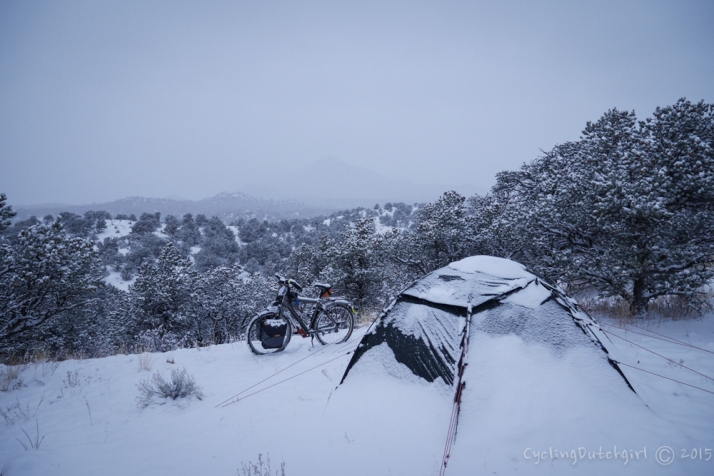 I had pushed my bike a bit of the way, lucky it wasn’t too deep to make my way back to the road.

There was a winter storm warning in place, it wasn’t terribly ‘stormy’.

But it was winter alright.

Good thing I have good tires and good shoes!

In Buena Vista I saw no “Vista” at all. I did see a nice little coffee shop where it was warm and cozy and I spent a little time warming up.

Jen happened to walk in the door, she and her husband live on a ranch just down the road. They have done a bicycle tour through Europe before. The had a whole barn full of bicycles!

And two gorgeous girls. They let me say with them on the ranch for a night. 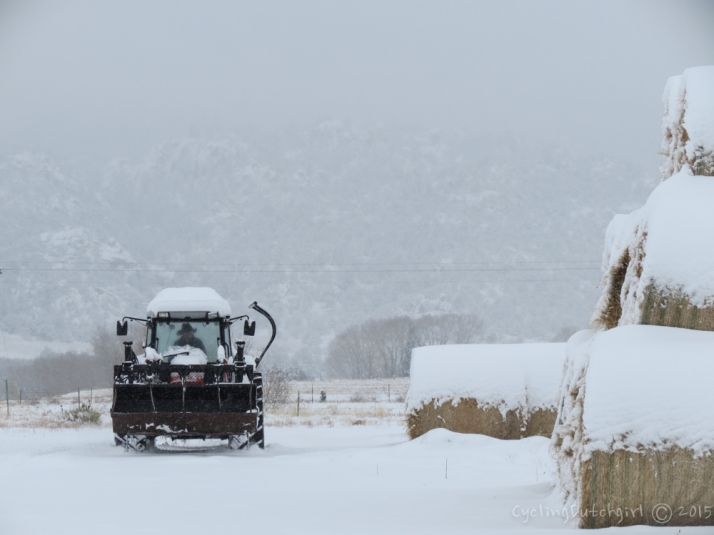 And showed me the first calve born this season. 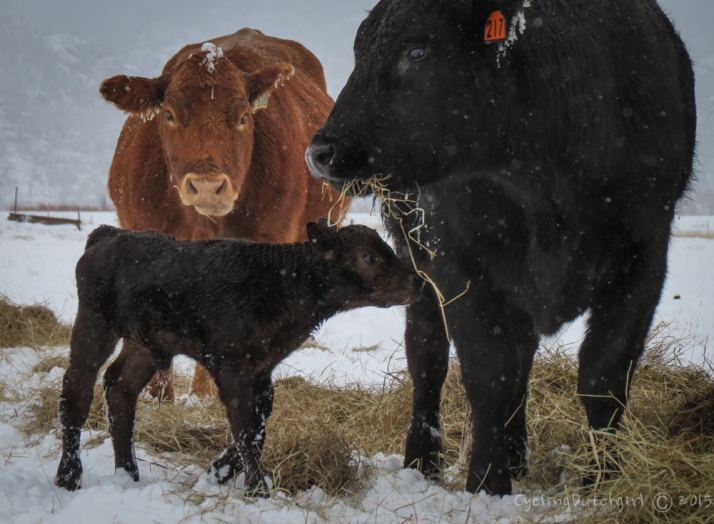 Only 5 miles from their house is a hot spring resort. Just what you need in this kind of weather!

So we all headed down there. A great place to soak for a while and get completely warmed up.

The storm cleared up in the morning and I had a beautiful ride towards Monarch pass. 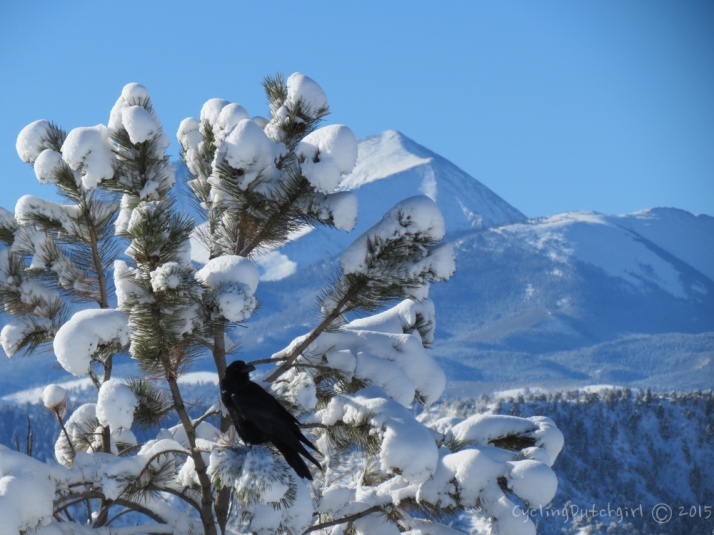 It’s lucky somebody planted a flag,

As beautiful as the day started, it became a little uncomfortable, there’s a ski-resort on Monarch pass, and EVERYBODY wanted to go there today.

I really love cycling in winter (in case you hadn’t yet noticed) but the downside in this part of the world is that a lot of roads are totally impassable (trust me, I tried) So you’re kinda stuck on the main thoroughfares that aren’t always the most pleasant.

Just before the top of the pass is a resort where I decided to have a cup of coffee.

As I was about to get on my bike and get over that pass the girl from reception came over to tell me that I was staying there.

Apparently a couple I’d been chatting to earlier decided to pay for a room for me!

I was so shocked I actually cried! (only a little bit, and not for very long…)

If they read this: “THANK YOU!”

I was very well rested to shoot over that pass the next day.

And down the other side,

where the wind finally decided to be slightly more favorable and push me into Gunnison.

It was much more quiet now too. 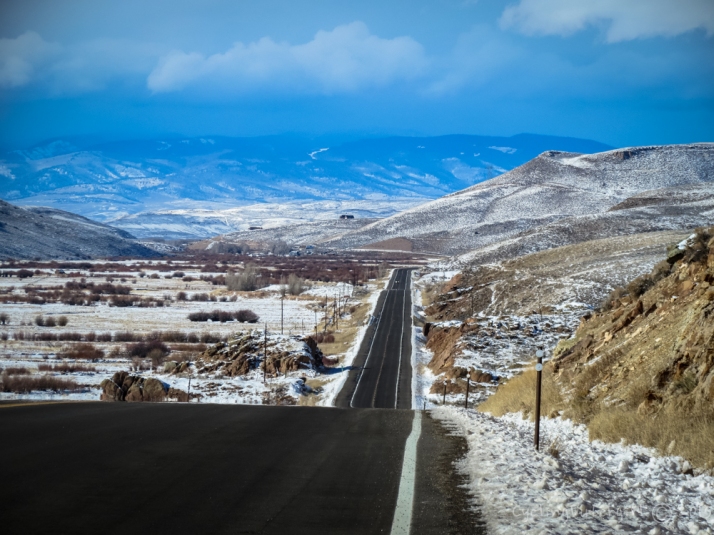 And in Gunnison, Kim looked after me, she’s seen me on the road earlier and gave me a really handy pair of goggles,

now my eyes are warm and I can actually see!

It came in super useful as more snow was about to come down.

I had ridden up a road that, again, was lovely and quiet.

Only after a day of climbing did I realise why it was so lovely and quiet.

It stopped. Well, it didn’t stop but it seemed real difficult to continue, or maybe I’m just getting a little soft in my old age 😉

I didn’t feel like pushing through deep snow so I turned around and took the long way ’round.

It was already getting pretty dark and the temperature was going down fast, so I found myself a log cabin that happened to be unlocked and camped there for the night. 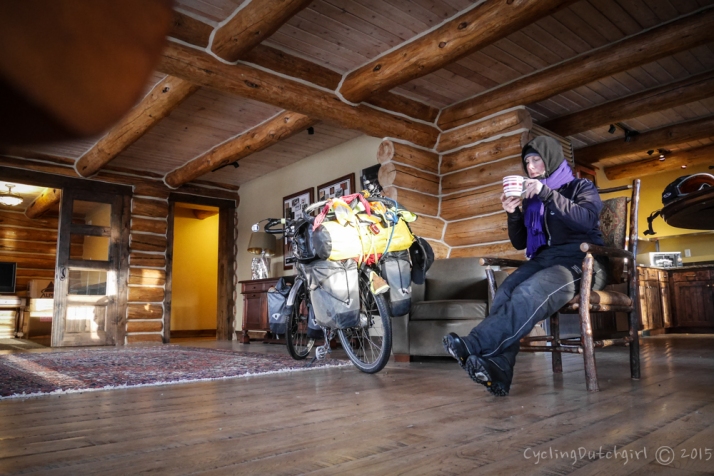 I hoped nobody would mind. All the water was shut off, but the power was still on, so I used the microwave to melt snow. 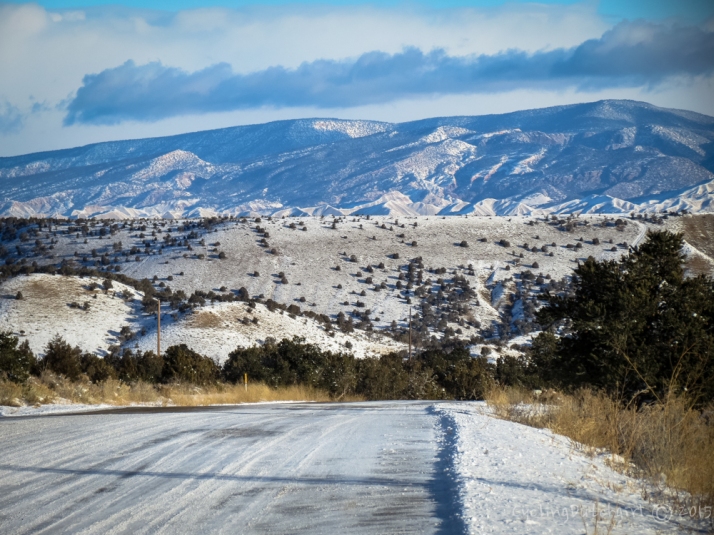 Now I’ve got a great little ride ahead of me. I’ll tell you all about it the next time.

For now I’ll wish you all a wonderful Christmas.

And a happy new year!

Leave a Reply to Martin from Twisting Spokes Cancel reply