In Colorado the roads can get rather busy.

I had left the comforts of Lucy & Stevens home in Placerville with a belly full and a great night sleep!

It was good after a couple of fairly chilly nights out there.

They had shown me picture albums of their vacations, my reaction was; “WOW! Where is THAT!?”

Lucy told me and I left their house with a brand new plan! 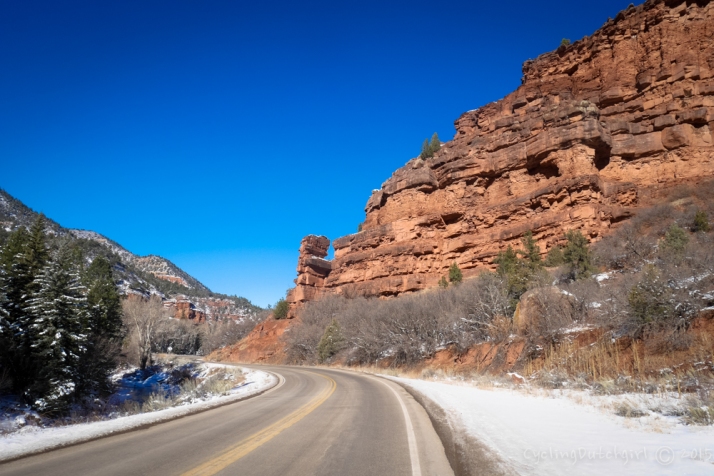 And a brand new friend.

Alex comes from Argentina, but he’s been here a long time now. I met him along the road the previous day and he figured I cannot leave the area without having seen Telluride, so he took it upon himself to show me around and bought me breakfast.

Not just that, he told me about some great places to camp and put me in touch with some friends further down the way.

I rode into the Paradox valley where there is a whole lot of very little, but some awesome hills with little roads and great views.

There’s some spectacular places to pitch a tent in this part of the world! 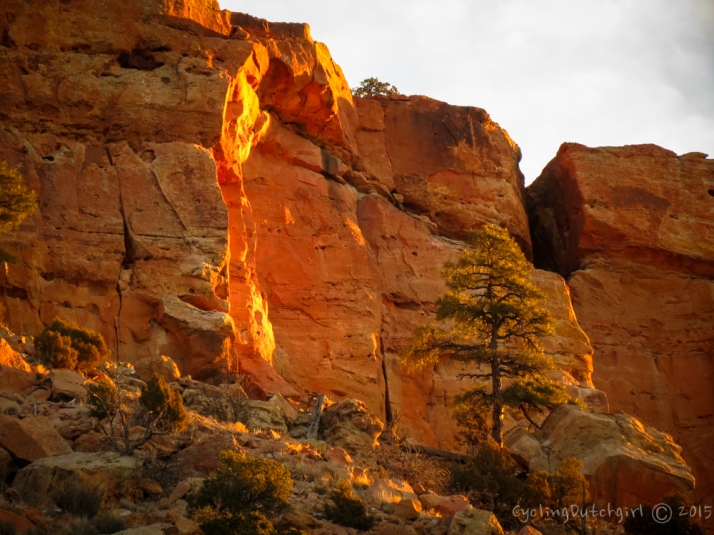 And it just kept getting better!

The store in Bedrock has been closed for years, so don’t count on re-supplying there.

It’s still a nice place to have a break and play with the dog for a while. 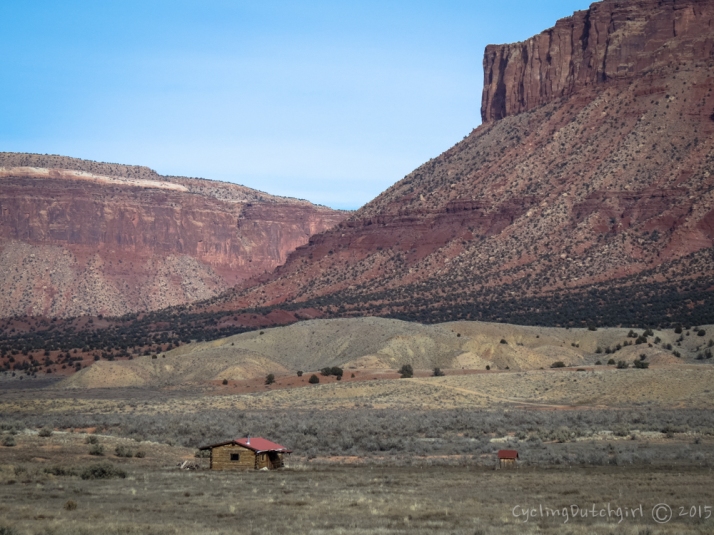 Climbing out of the Paradox Valley and into the next one I noticed the Geronimo farm,

I stopped to see if I could fill up some water bottles and got chatting, right now there is a lot of work being done.

And cyclist be aware!

This family is building up a bicycle rest / camp area where they are planning on renting out cabins as well!

They just so happen to have finished their caravan that very day! They had rebuilt and cleaned up and finished it about an hour before my arrival, So I was their very first guest! How perfect is that? With some gorgeous hikes in the area its a wonderful place to spent a little time.

This is their own little paradise where everything is organic, GMO-free and 4/20-friendly.

Just so you know, it’s Colorado after all…

You find them along HWY 90

Just 6 miles before the Utah border.

By now the weather had started to get a little crappy, it was windy and snowing and it seemed there was no end to this hill.

But as I rode over it I suddenly came out of the clouds a whole new and very different landscape opened up. Red rocks, and a lot of them.

It reminded me of Australia a little bit.

If you look good you can see all sort of things in the rocks, like clouds. I saw a face.

Alex had put me in touch with Billy from Poisonspiderbicycles in Moab, who was super helpful with finding me a place to crash for a few nights and helping me with some preparations for the next leg of my trip.

Which takes me to the idea that Lucy gave me;

After dropping me off at the start of this 100-mile trail in really bad snow Billy went back to town and I pitched my tent under the roof of the information centre, I thought it was closed.

But that was not the case, in the morning a few guys came by to open up and refilled my water. That was nice, because apparently I was not going to find any water for the next 100 miles, my biggest worry was that what I was carrying would freeze.

The next one was that the start of my trail wasn’t exactly open. But it was just a 4-mile stretch, so I sorta shot through because it would be a shame to end the trip before it even started.

But then I was on the trail! And it was a little gray and cloudy but spectacular! 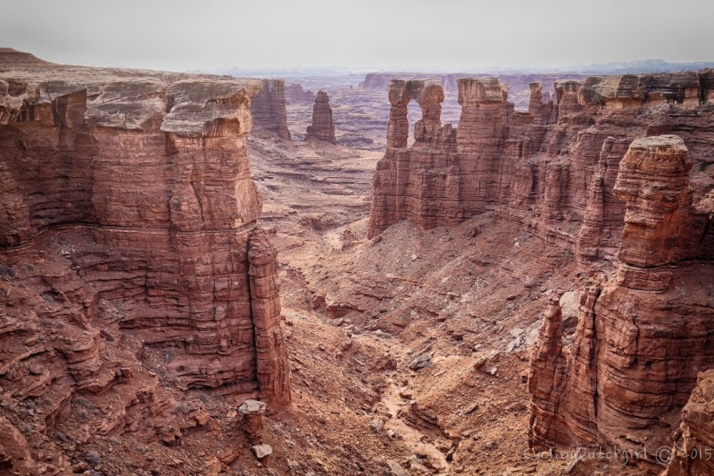 It is canyonland, after all.

It’s supposed to be a desert, 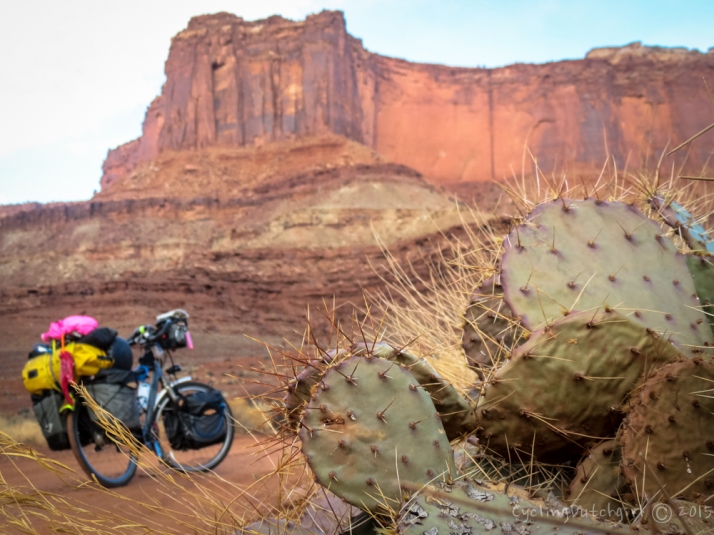 And there’s supposed to be no water, 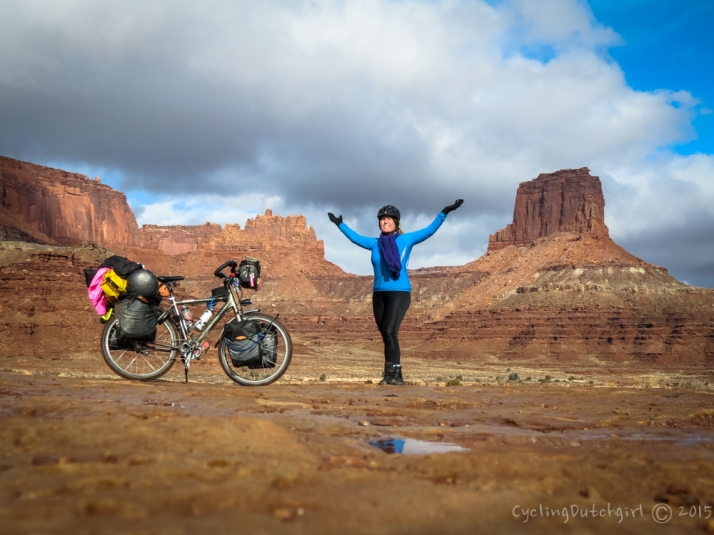 But that, clearly, was a lie.

Not only did it come down bucketing in the form of snow, rain and hail,

The first couple days were a nice combination of sun and clouds.

It’s called the white rim trail, but is was not very white at all.

The terrain was pretty good, the rock could get a bit slick

and sometimes there was a little too much sand to ride through,

But mostly it was perfectly rideable. 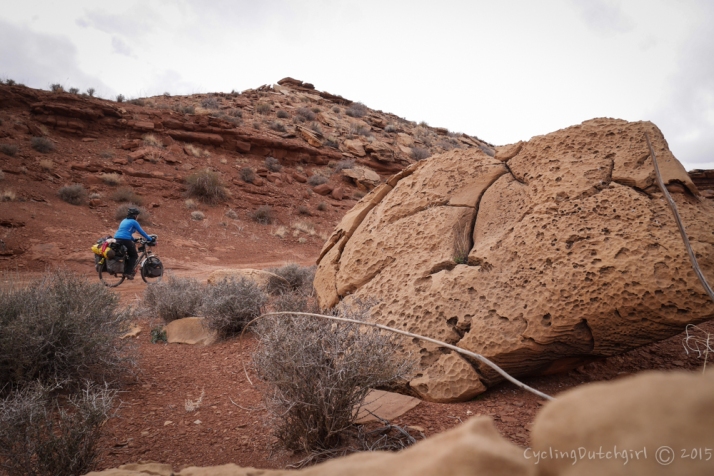 Before I started I had to get a permit and tell them where I was going to camp every night,

I guess it didn’t matter all that much as it was not very busy. 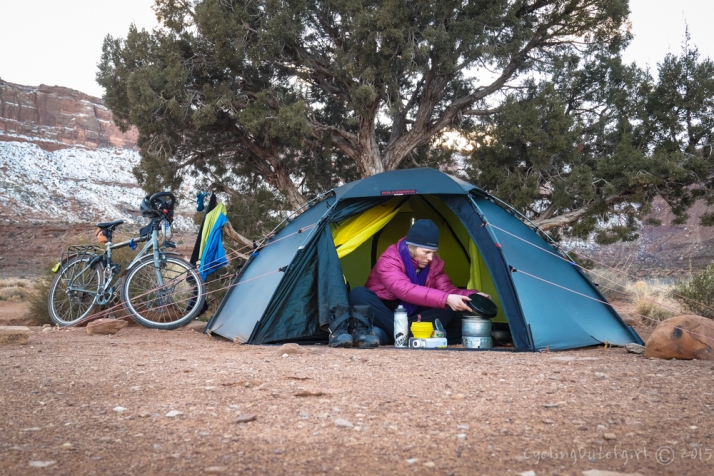 I’ve seen a grand total of 3 vehicles, all in the first couple days. 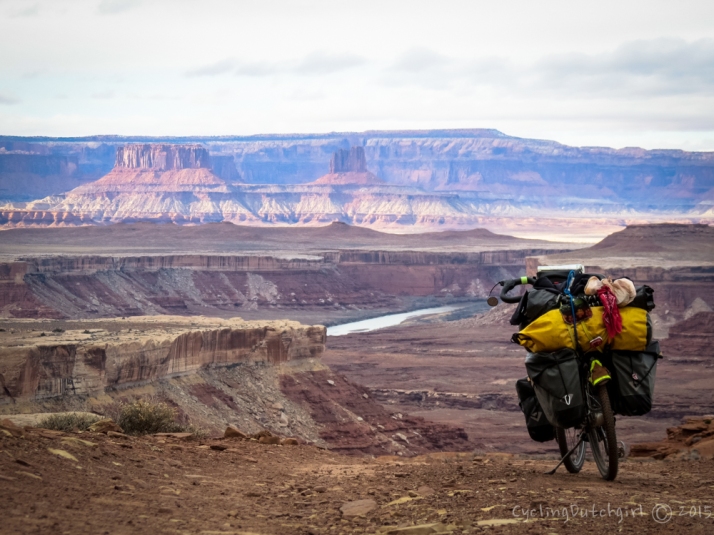 I marvelled at the rock formations. 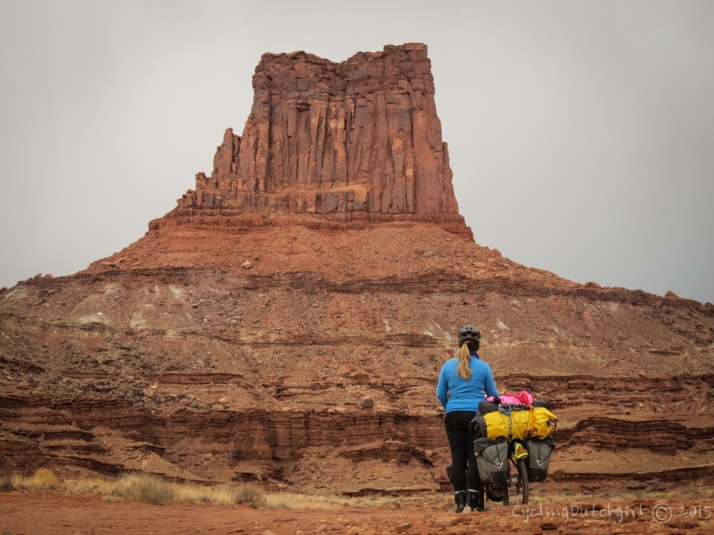 And even had turkey on Christmas eve!

and then I woke up on Christmas Morning.

the good thing is I had only planned to ride 15 miles that day.

The other good thing is I really like snow.

But it can slow down your progress severely. 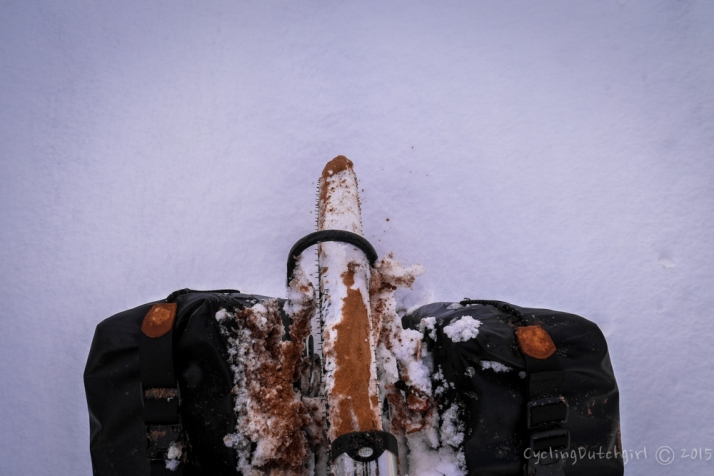 Especially when you hit mud, cleverly disguising as snow.

That was a mess, but didn’t last all too long.

The other good thing was I found a nice shelter to melt snow and make coffee, all was really excellent!

I found the most gorgeous spot to pitch my tent along the Colorado river.

It was a full moon so I didn’t need to use my flashlight at all.

I did use my candle,

The temperature was pretty low that night, but at least it was sunny and clear in the morning!

And a virgin road! I shared with no one,

except a big cat of sorts. 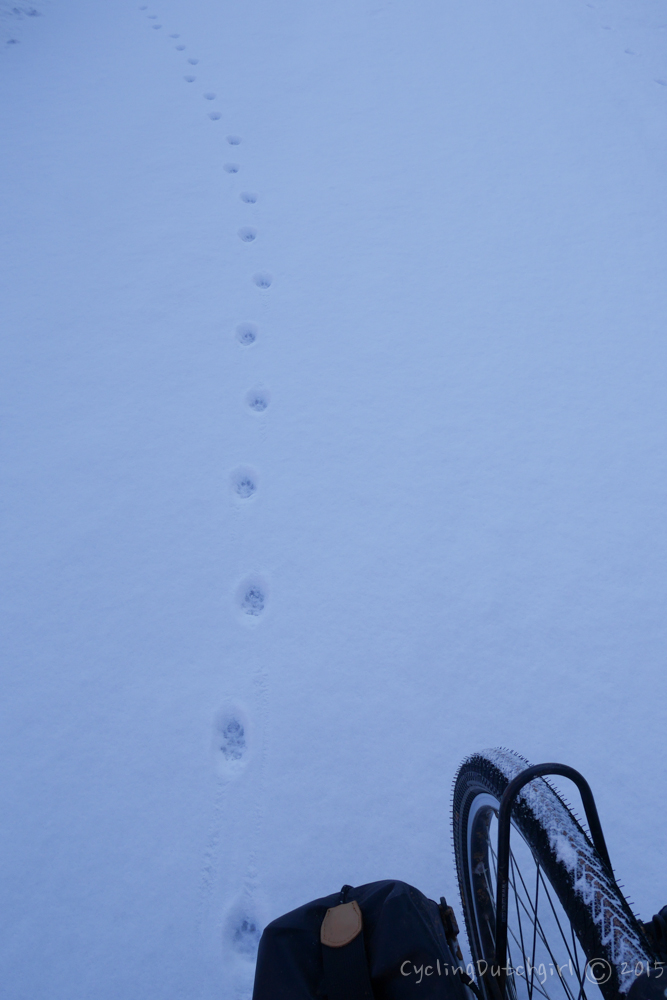 It was already the last day of this little loop and all I had to do was get out of the Canyon and back to the road. 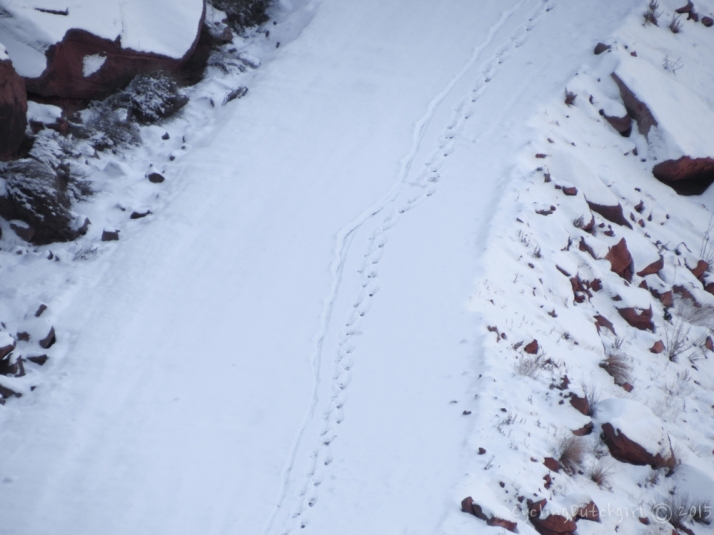 When I got to the top it wasn’t the top, the road gradually kept climbing, that wasn’t the issue. 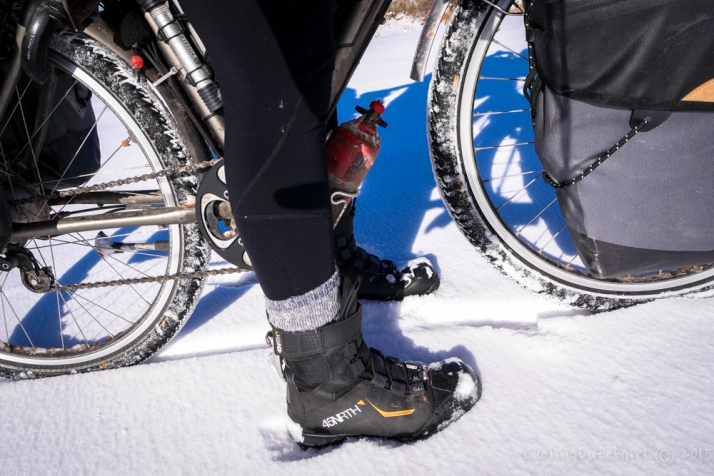 I kept crawling along at a snail’s pace. 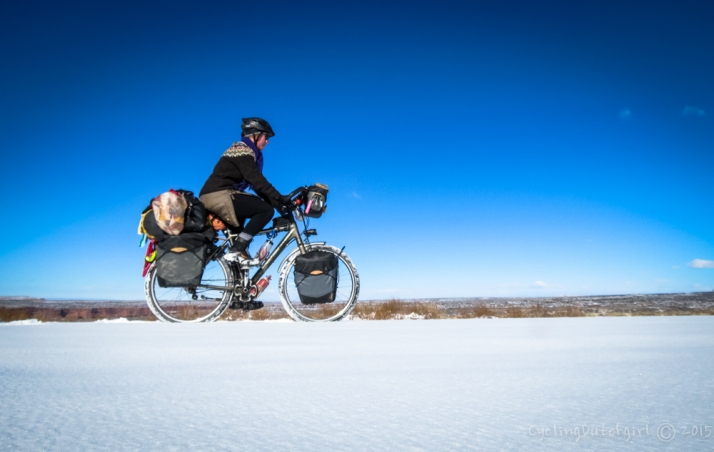 It did not make me happy.

I found a little shelter next to this bush.

I did make it back to the road, 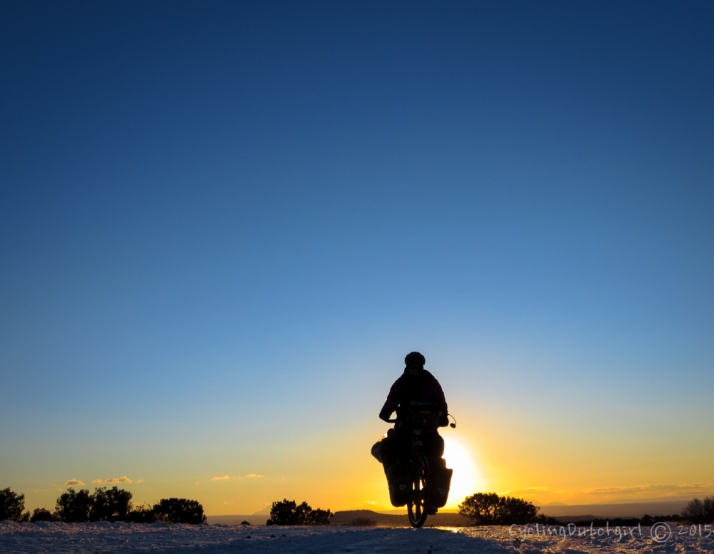 It was just around sunset and I still had a way to get into town, 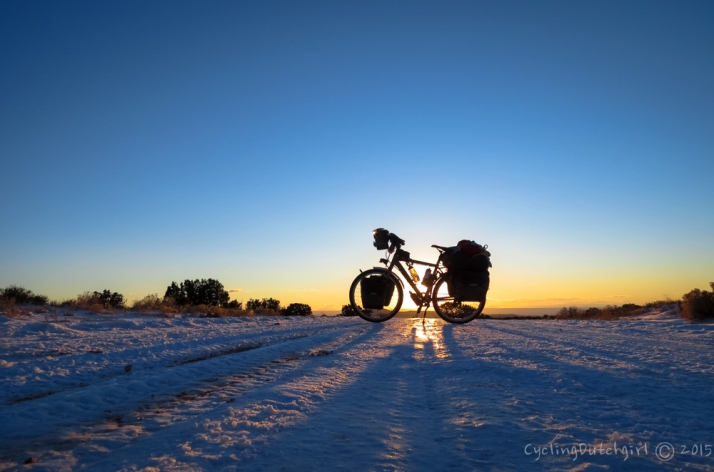 But just as I worried a little, because it’s all the way downhill to Moab and I was still riding without brakes I ran into a vehicle who gave me a ride back, and there was a surprise for me.

Not only a big steak and a good beer.

Jim decided to come visit and have a vacation over the new years weekend.

That was great fun!

Very different from our last ride up in Montana!

But we had a plan so we needed to move.

Through monument valley and Zion, 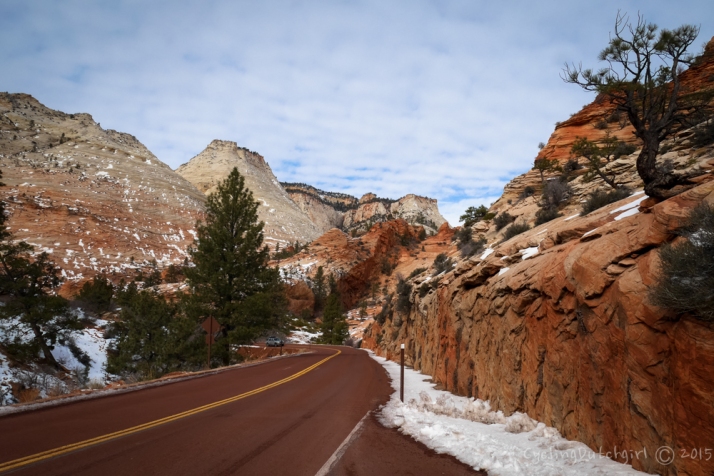 In only a few days it was new years, and my bicycle had an appointment with a fancy hotel room. 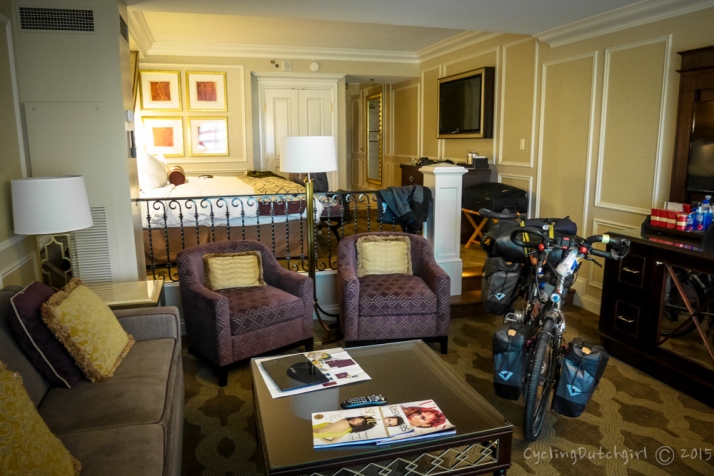 It was a bit of a shock from my tent to this utter decadence. 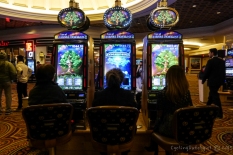 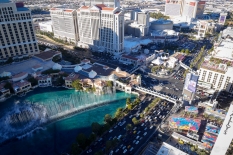 What can I say.

Good to have seen and good to get away from after a few days. So that’s exactly what I did.

Wishing you all the best!

53 thoughts on “At Opposite Extremes”