The past few weeks have been an amazing collection of awesome scenery, 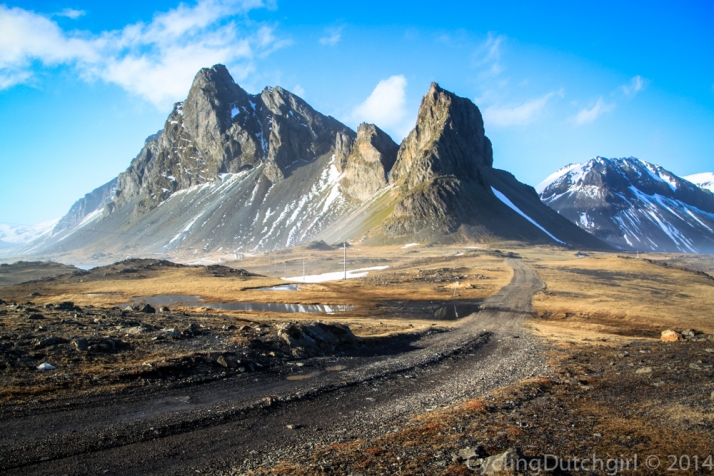 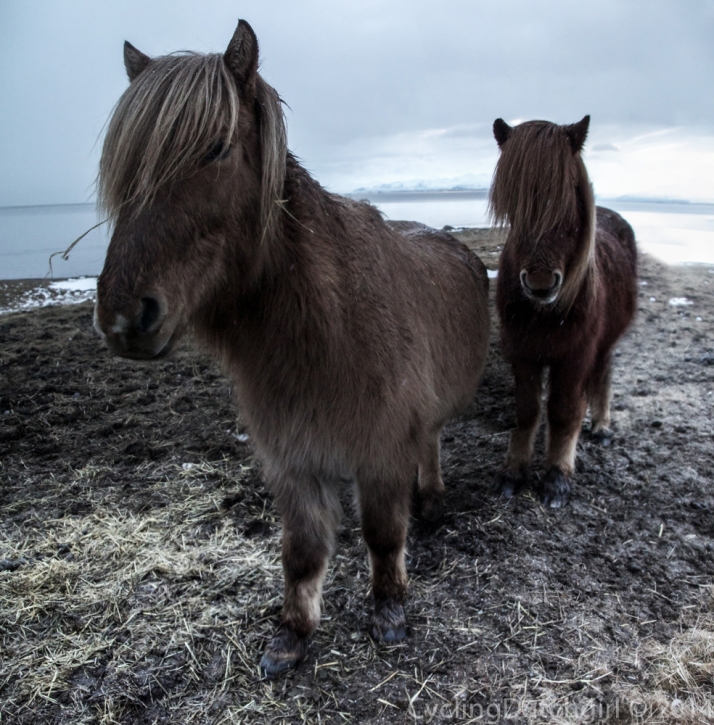 I know that it can be windy in Iceland. It’s the biggest issue.

I don’t mind cold, I don’t mind snow and I don’t mind the occasional windy day. But when it’s blowing a gale at over 118km an hour it’s hard cycling…

It’s also near impossible to show in a picture what the wind is like, but this waterfall might give you some idea.

But, being lucky as I am, there always seems to be some place to shelter.

In one case it was a cave.

Well, I did shelter from the wind here for a little while. 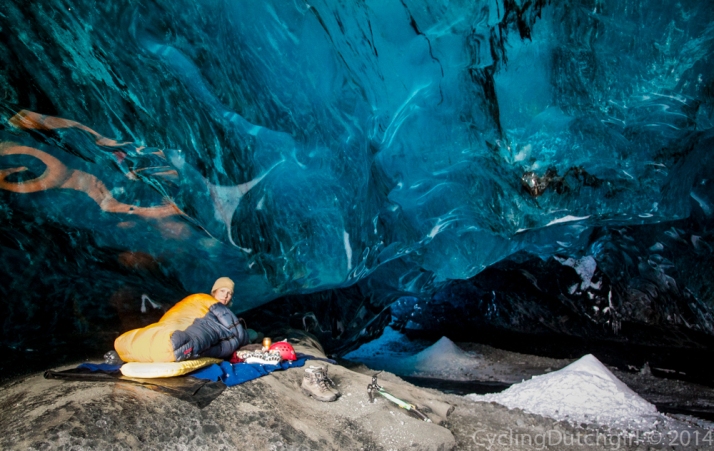 The ice cave I visited a few weeks before with Simon and his friends.

I got a message from Simon. His mum had knitted me a jumper…

I’ve met many wonderful ladies in this world that gone to great lengths in looking after me. But this is the first time some one actually knitted a jumper for me in order to stay warm in Icelandic conditions.

It’s gorgeous and I love it!!!

Simon came over to give it to me and spent a couple of days out camping. 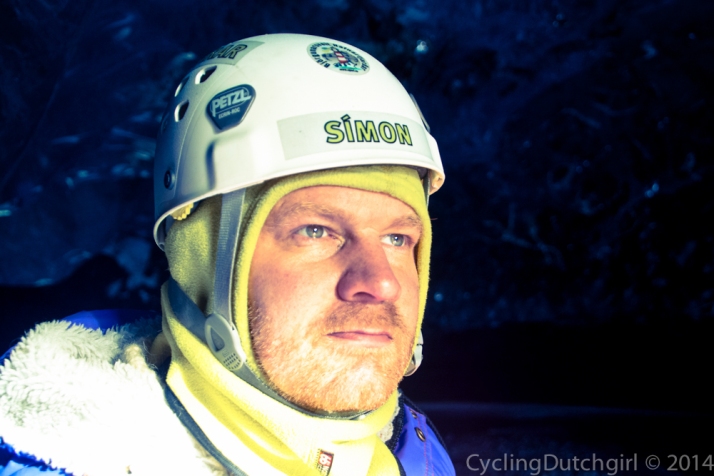 It was one of the last nights that it’s possible to visit this cave. As spring is on its way and the river could rise and the cave collapse.

You might wonder how smart it is to camp in a melting glacier.

But there seemed to be enough tour groups around to convince me it was ok.

While the tours got their hour inside I played outside in the snow and build me a man.

It could be the friend of the lady I built in Sweden a few years ago.

The weather wasn’t too bad and there was even a hint of an Aurora in the sky that night,

this is at Jökulsárlón, the glacier lake.

Here icebergs that break away peacefully drift around while seals chill in the sun (when there is any).

It’s one of the top attractions in Iceland and when I was there part of the area was closed off for filming.

A few movies have been filmed here already. Like View to a Kill, Die Another Day, Tomb Raider and Batman Begins.

The black volcanic beaches along the south coast are beautiful to see.

This picture was taken at a remote beach, there is a little rescue shelter there with a light house. 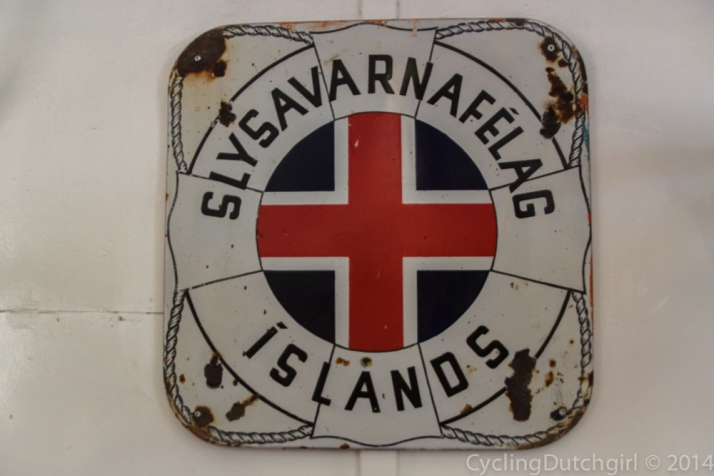 Apart from that, not much.

Miles and miles of black sand and little puffs of grass.

The rescue shelter was built after a ship wrecked and the people had to walk two weeks to get to a road. This is a long time ago, before 4WD-tours and bridges.

I tried climbing up to the lighthouse, and almost made it.

A small fear of being blown out to sea stopped me from getting to the top. 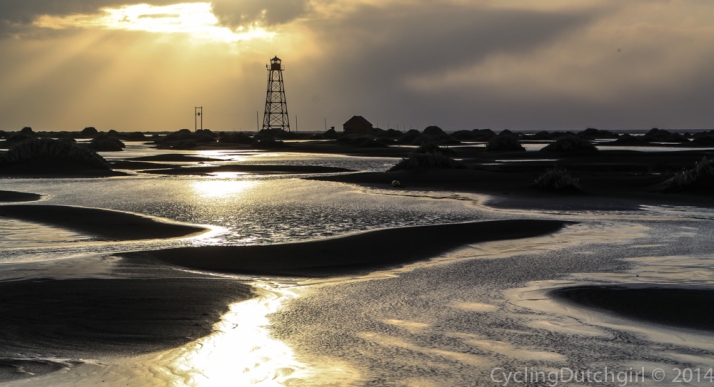 The weather forecast wasn’t too good.

So another shelter had to be found to spend the night.

It was good Simon happened to be in the area for those few days as he knew of another place to get some shelter from the wind. A hut build for climbers. There’s a perfect rock wall to practise on behind it, if you’re that way inclined.

For me it was good to be out of the wind. Although to get to the toilet you did have to get out into the weather, here’s what that looks like:

It’s mad how quickly weather changes around here, as this is what the place looked like in the morning. 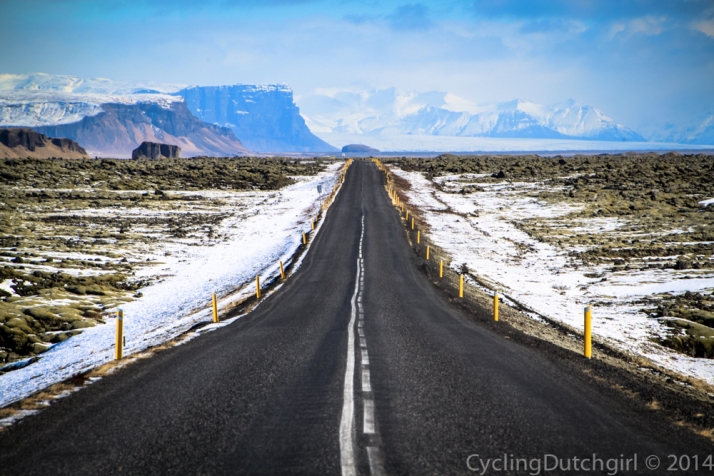 I slowly made my way to the next settlement.

A charming little fishing town where I pulled up at a small cafe in the harbour. 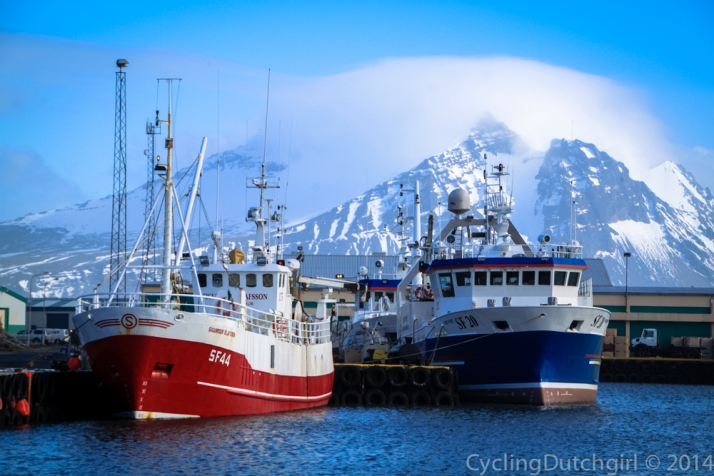 Run by Ingibjörg and her husband Keli.

Not sure how it came up in conversation but Keli mentioned that his mother, wife and daughter share the same birthday.

The same as mine!

I became an instant part of the family and stayed for four nights!

Keli is direct descendent of a Norwegian king and, according to him, his wife stems from an Irish princess. So there you go.

Staying with royalty 🙂
We spent a few rainy days watching James Bond movies and when it cleared up they showed me around their town and the greater Höfn area.

I met their friends and family.

Keli’s family history is displayed on a sign just outside the town. ( 2nd on the top left is his granddad)

We had a look at a yellow lighthouse,

where we collected some rocks.

Another interesting feature in the area is what looks like a very old viking village, in fact it’s a movie set for a movie that has not yet been shot.

In the meantime it makes for nice pictures.

But, not being able to stay around forever I managed to climb on my bike and ride over a hill.

Yes there is a tunnel too.

That would’ve saved me the 16% climb on gravel, but it wouldn’t have given me any views. Or satisfaction for that matter. 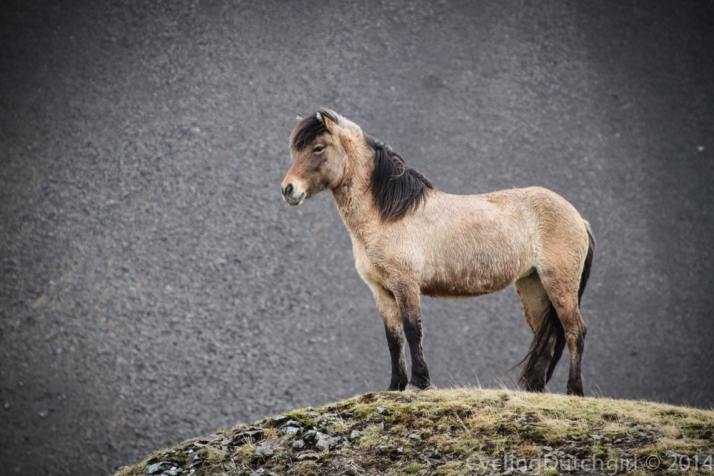 I was now officially on the east side of the country, where I had long straight stretches of road in the south here you wind your way through fjords.

After spotting a few old buildings in the distance I thought it might be a nice place to camp. 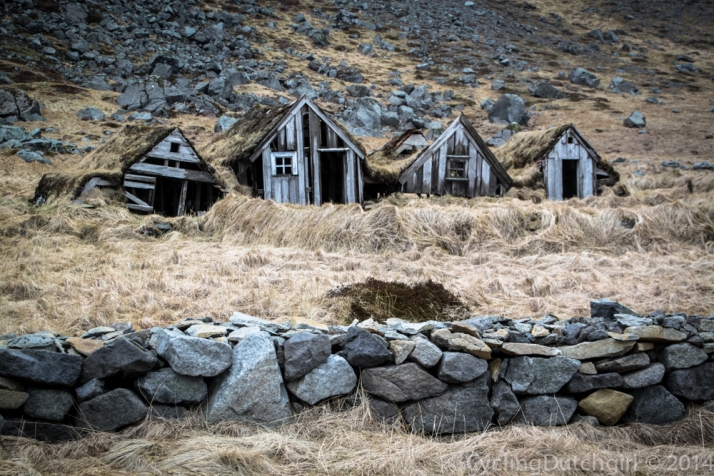 most likely I would get a lot more wet inside then out.

So I pitched my tent next to a little stream instead.

Next morning, after the necessary coffee

I followed the road along rugged coastline 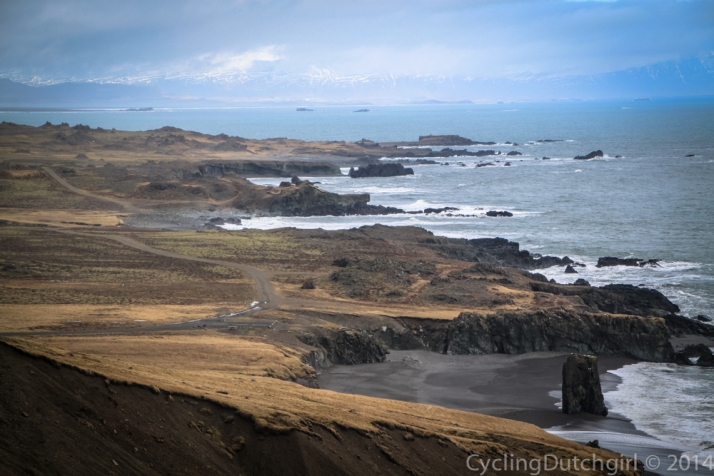 into the small settlement of djúpivogur.

I had heard about a hot spring nearby, but must’ve missed a turnoff.

I wasn’t feeling all that flash either, so after pitching my tent on the local campground a wandered down to find some food.

That’s when I got talking to Dröfn. 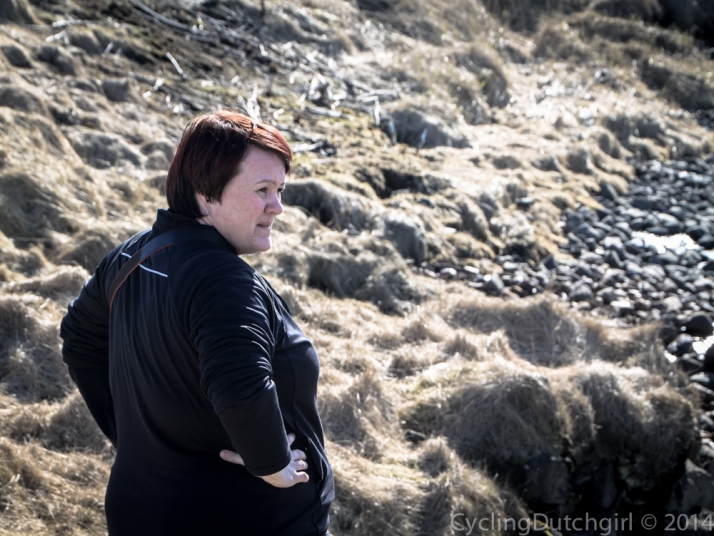 She’s born and raised in this village and recently bought a house, I told her I found that a very grown-up thing to do. She reckoned so as well, gave me some painkillers and invited me over to stay the night.

As she started work late the next day she decided to give me a tour of the town.

The area is famous for many kinds of birds, there’s even an art installation depicting 34 eggs from different bird species

This is a great spot if you like rocks. There is small rock-museum with an amazing collection of rocks gathered over the last 25 years by local man Auðunn Baldursson. 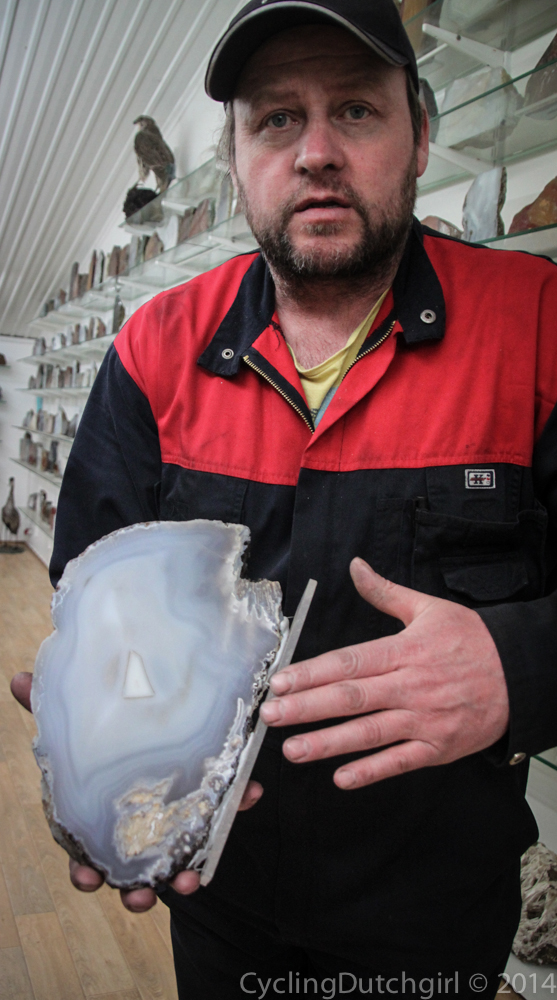 He cuts the rock and polishes them wich makes them awesome and surprising!

Who knew that plain old rocks could be so fascinating? 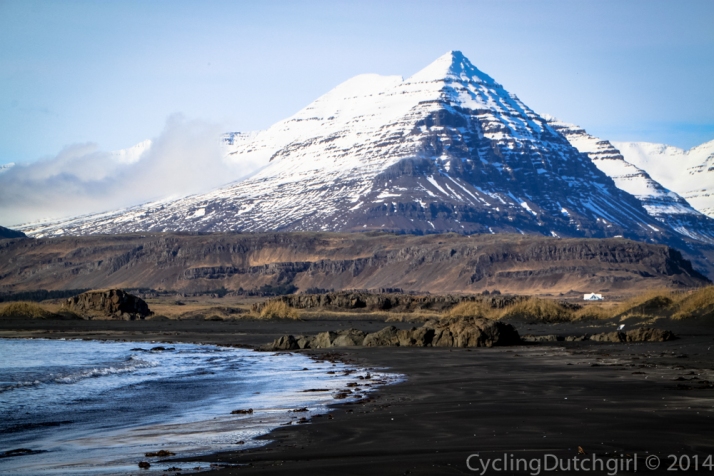 Dröfn also knew about the hot spring I was talking about.

before having a dip in this perfectly placed tub.

One of the best camp spots in the world ever!

After work Dröfn joined me for a couple of hours and we saw the Northern Lights from our excellent spot in the hot tub! 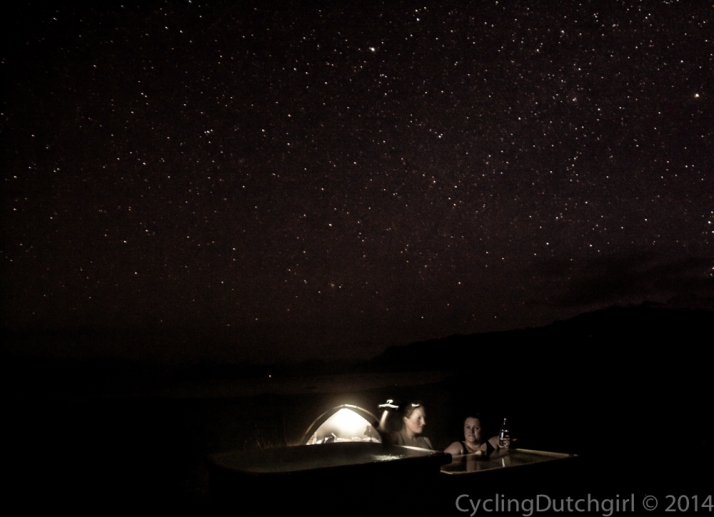 Clouds were rolling in though, so we drove a little up the road to take a picture. 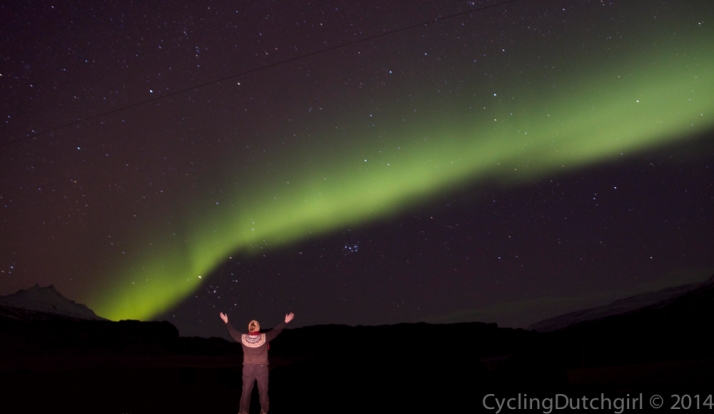 I was so glad I managed to locate this place! 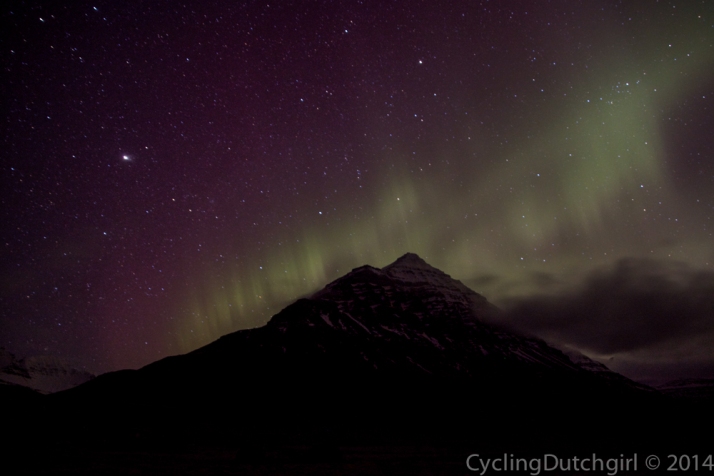 And the next day was sunny!

Only for the day but good enough to put me in high spirit and even do a little dance on the road.

And I rode without hands, ears or helmet.

I had stopped to warm up for a coffee in Breidalsvik when the owner of the place mentioned he’d seen me on the road somewhere before Höfn.

He gave me the picture he had put on his Facebook page, as he reckoned it’s madness to be riding a bicycle in March. (in Iceland)

A few days later I got an email from the same guy.

It made me laugh.

He’d seen me on the road again, and didn’t stop to say g’day.

Instead he took another picture and send it to me …. 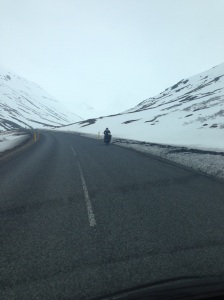 I visited towns with unpronounceable names.

The good thing about travelling this time of year is all the campgrounds are closed.

It also means it’s a little chilly at times which makes me very slow.

Especially in the mornings…

Finally I left the coast and headed up the hills.

And into the great white. 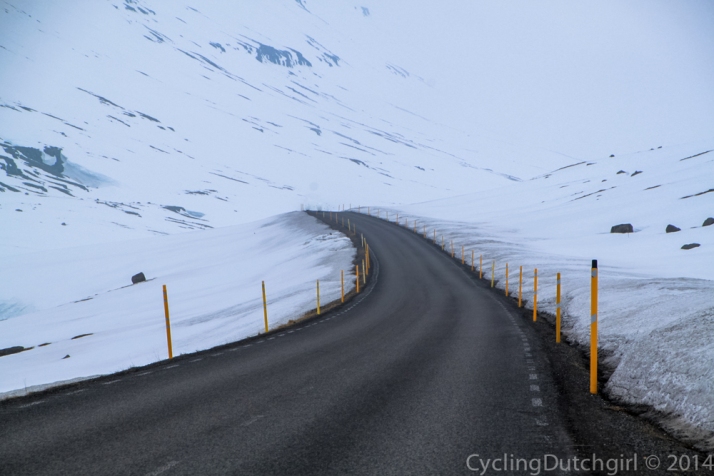 I was lucky the weather was good because the emergency shelter on top of the road was boarded up and snowed in.

I had not much to do in Egilsstaðir, with 3000 inhabitants the capital of the east.

So I went to the supermarket, got me some supplies, and was stopped on my way out by Jorge.

From Spanish origin he’s been living in Iceland for over 20 years. He lives by himself in a big enough house so figured it would be a good idea if I stayed there too.

He’s a tourist guide, speaks many languages, teacher and geologist. He was still chatting merrily away as I headed out of the house the next morning.

I was welcome to stay as long as I wanted he assured me, but with good weather and a high Aurora forecast I thought it best to keep moving along. 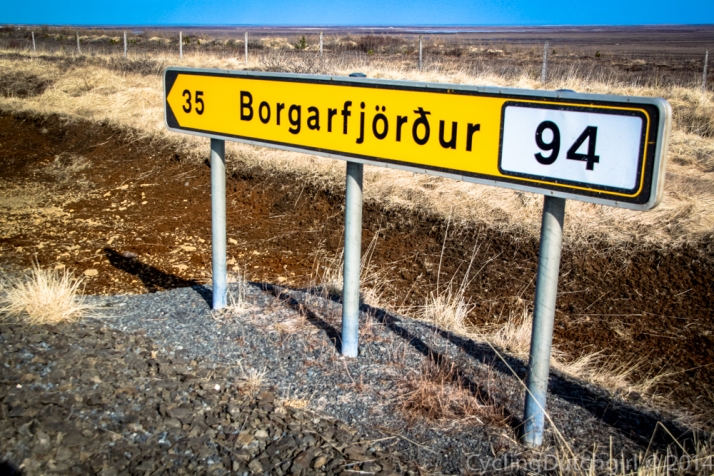 So that I did.

But not for very long…

32 thoughts on “Reindeer, Rocks and Royalty”