Where do you get shrimps on the barbie?

Where do you sit around a fire drinking beer and singing songs?

Where do you get a fright as you ride over a snake in the middle of the road?

Welcome the land of the rising sun, although I haven’t seen the sun rising yet as it does that at 4am this time of year. And most mornings have been misty and wet.

Did you know that Japan has a monsoon season? And I landed smack bang in the middle of it. That’s what you get for not planning.

I’ve heard from forever-cyclists Eric & Amaya that Hokkaido is the place to be this time of year. The northern most island of the country.

So after spending a couple of days acclimatizing at the Narita airport hostel where Yama introduced me to a few of the many peculiar Japanese ways, and foods,

I wasted little time. Rode through a maze of miniature little country roads towards the ferry and got there just in time to board.

Along the way I found out that it’s just about impossible to use any ATM’s in the country. Which is highly inconvenient but makes for a cheap trip. I must’ve looked hungry outside the so-manieth bank I tried. A very enthusiastic lady came towards me and told me she’d seen me cycling way down the track. She then pushed 1000Yen in my hand and ran off before I could refuse. How odd.

The boat was nothing like your bog-standard ferry I’ve taken a few times over the years. It was more like a luxurious cruise. I’ve paid for the cheapest place on board and got a mattress, with sheets and pillow in a 15-person (female only) room. There were only four of us. So lots of space. For a little extra you could join the dinner and breakfast buffet, a huge selection of beautiful fresh food!

Out the other side I came across a bike lane,

I had no idea where to go except out of town, by chance I stumbled upon a bike track that took me all the way to Lake Shikotsu.

It was a lovely spot! And apart from a few very shocked looking duck-peddle boats, 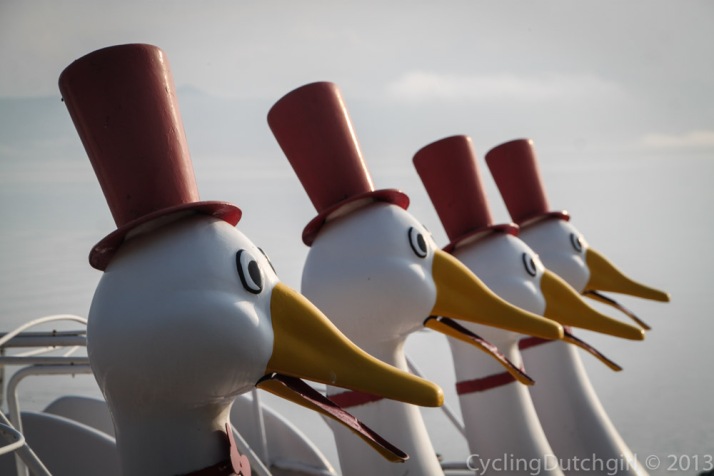 it also had a campground. 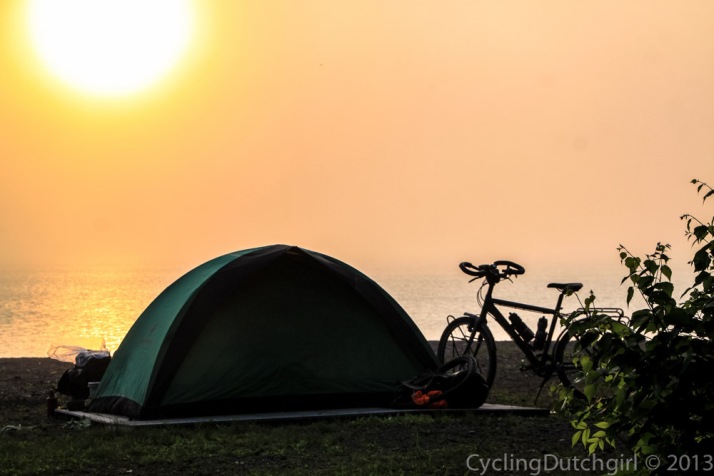 I’ve seen heaps and heaps of really excellent places to camp. For now I’m still a bit apprehensive and don’t yet dare to pitch my tent in the scrub. There’s just one too many warning sign for bears. 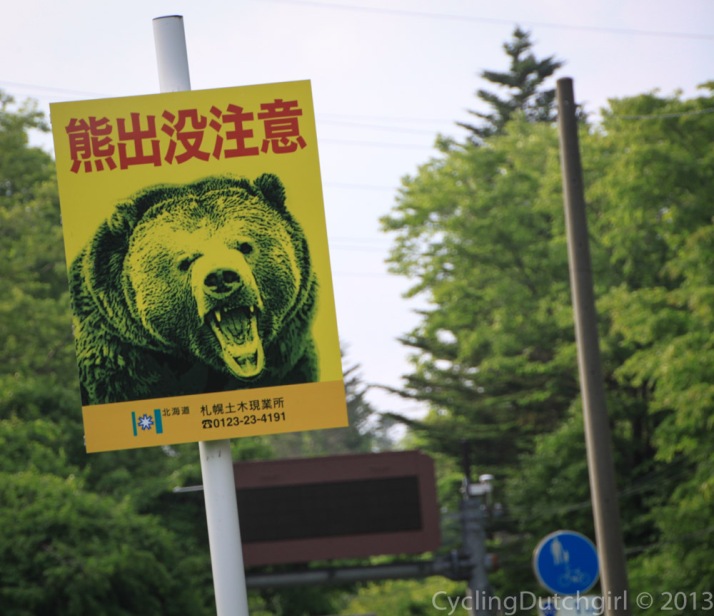 I’ve never worried about wild animals yet but these ones have killed 147 people in the first half of the 20th century and there have been 68 attacks since 1962. Probably not a lot compared to the amount of people around, but I think I’m not gonna take my changes. Yet.

The camp side was completely abandoned. Until after dark when two car loads of guys showed up for a night of drinking on the beach. They decided to set up right next to me. I did not like that. They seemed fine at the moment, but two carloads of drunk guys and one girl on a beach didn’t seemed like the bestest of combination to me.

So I packed up camp and moved away. That’s when I stumbled upon my first ‘Rider House‘

They’ve got this wonderful idea here in Hokkaido to have lots of cheap accommodation-places specially for the traveller of the two-wheeled variety.

In this particular one, a log house on the lake side I met two Riders. One who was riding around on a little Honda,

the other was named Honda.

Honda was at the end of his trip and gave me his map. A wonderful and extremely useful gift it’s too. Apart from everything being in Japanese it tells you where to find rider houses, camp sides, hot springs and general places of interest.

People here are very generous. There was the truck driver who jumped out to give me a bottle of energy drink, and the father and son who saw me cycling up a hill and returned 10 minutes later with a banana, a cake and a bottle of water.

Or the owner of a small restaurant who gave me a bell to scare away bears and a wouldn’t let me pay for my meal. 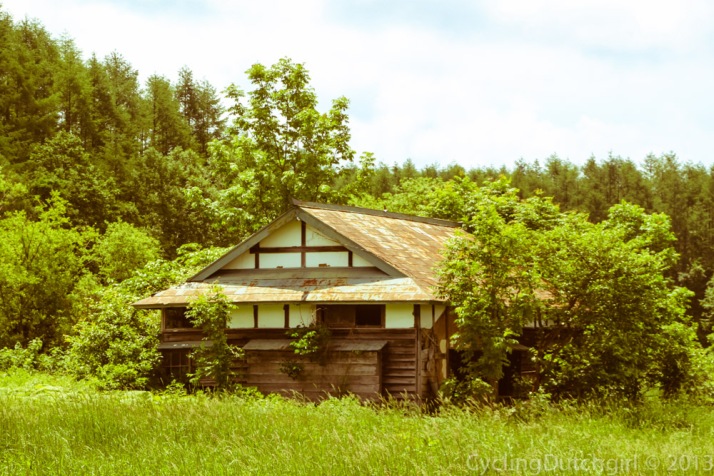 I’m keen to find some dirt tracks and I’m happy I got my bear-bell. That surely is going to save me. In the event of an attack the general safety instruction tells you to ‘Keep calm‘… Yeah Right.

Sometimes I wonder if I really look so lost, hungry and unorganized or everybody is just terribly kind and want to help out in any way they can.

The biggest city on Hokkaido is Sapporo. Sapporo means beer in Japanese. Just for that it is a great place.

For a city with a few million people it was surprisingly easy cycling.

There’s a lot of bicycles around and they are well catered for in the form of wonderful bike lanes with under and overpasses so you’re not even on the same road as all the other traffic. And when you are the drivers seem so patient and considerate. A little bit of a shock to the system coming from NZ. Although I never thought they were too bad over there. It’s a whole new level of courteousness here.

While in town I thought it a good idea to get a Japanese SIM for my phone. Guess what. Impossible. Or so I was told over and over again. Until I got the help of Hiroaki who cycled across America &  Canada last year. 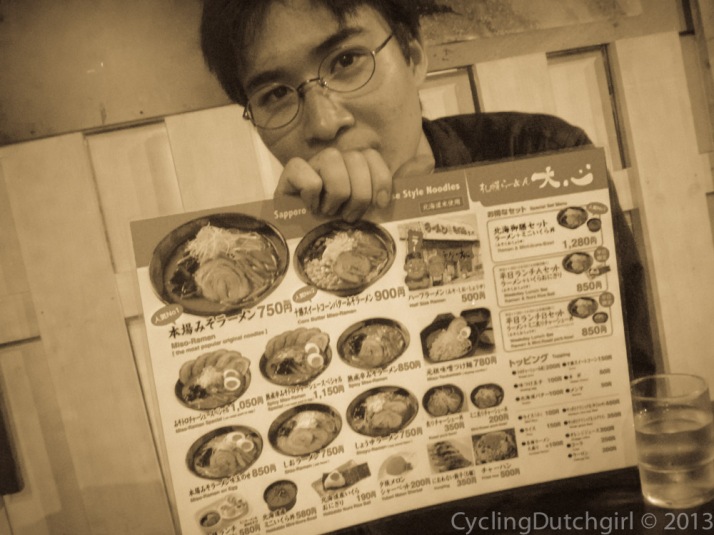 Leaving Sapporo, again, a bicycle road that winds itself out of town without ever having to be on the same road as other traffic!

I’ve sat on and squatted above many different toilets in my travels, but Japan takes the crown for luxury. First of all the toilet seats are heated! I might have yelped the first time, but you get used to this very quickly. And it’s actually rather nice to have a warm seat on a cold morning. 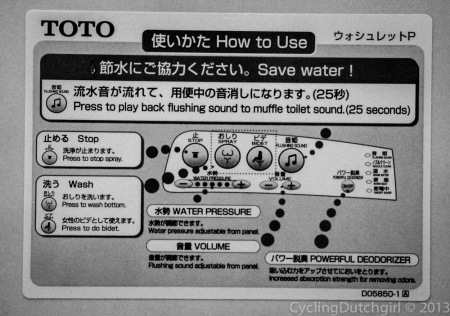 Then there’s so many buttons you can push, some squirt water all over your bum some actually play a recorded flushing sound ‘to cover up toilet noises’ I think it’s hilarious and spent a fair bit of time playing with the toilets. It gets complicated when you can’t figure out which button to push to actually flush.

The food out here is glorious too!

I’m so used to steak, pies and sausage rolls after all those years in Australia that I’m just delighted to see something else.

This area is famous for its melons. I’ve been told.

I had a lovely ride over a misty mountain, didn’t get lost all too often, past some very cute walls,

ended up at yet another hot spring,

And found a camping place at a dam. 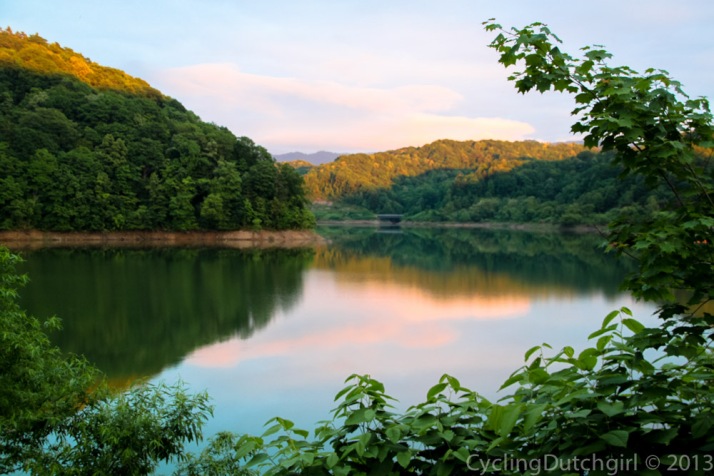 There was a party at the dam. I don’t mind a party every once in a while but I could hear the stamping techno music from miles away. Not my style.

So I cycled along and found another spot to pitch my tent. It was right next to a lovely couple from Sapporo who had a caravan and offered me a beer. 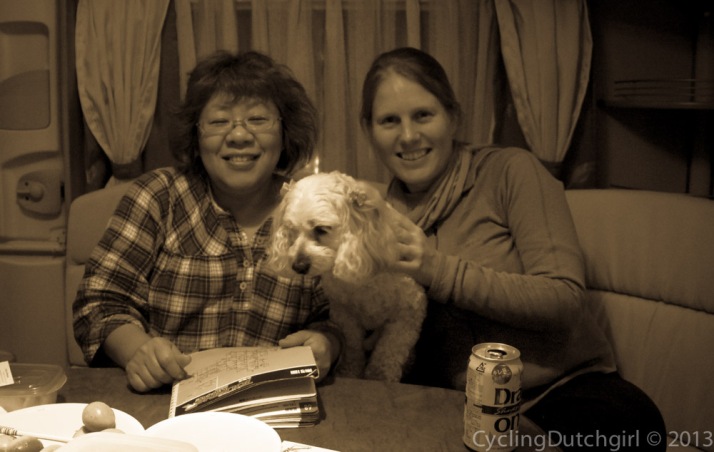 Himashi has a seafood business back in Sapporo. 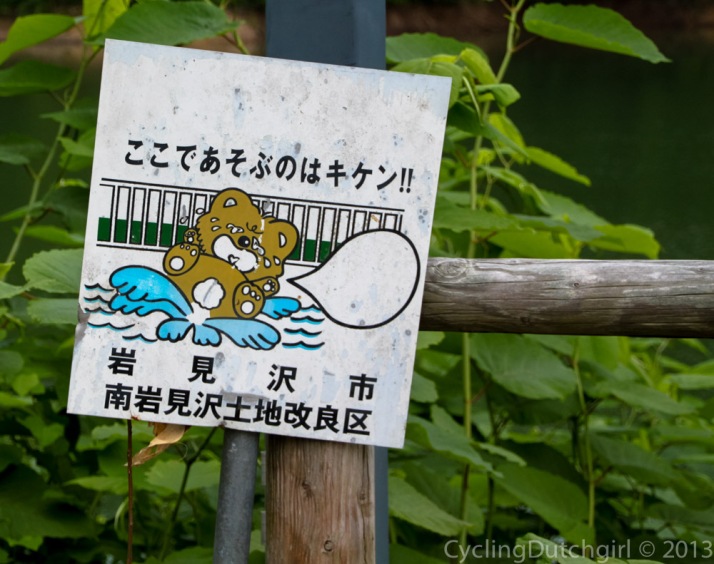 An absolutely wonderful thing here in Hokkaido are the hot springs. There are thousands scattered all around the country side and you could probably plan your trip to end up at one of them every day. I haven’t quite done that but I’m not far off.

One minor issue I have with some of the roads is that they go through a fair few tunnels. I kinda feel cheated to ride up a long climb and never having the satisfaction of going over a saddle or pass.

Instead having to go through tunnels on very narrow sidewalks with the deafening roar of traffic. When there is traffic.

But I found a tunnel-free road going up a hill, 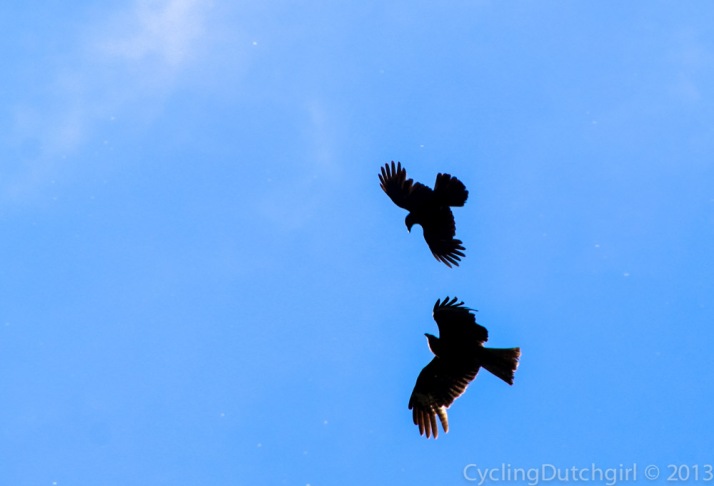 I climbed over one km in altitude

and found not one, but three hot springs right at the top! 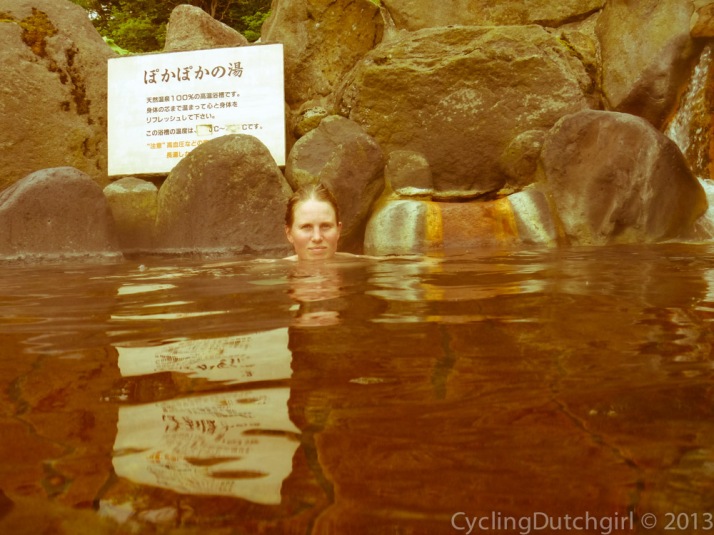 After that it was an easy roll down.

Got a bit of a fright as I rolled straight over that snake, but he didn’t seem to badly hurt.. 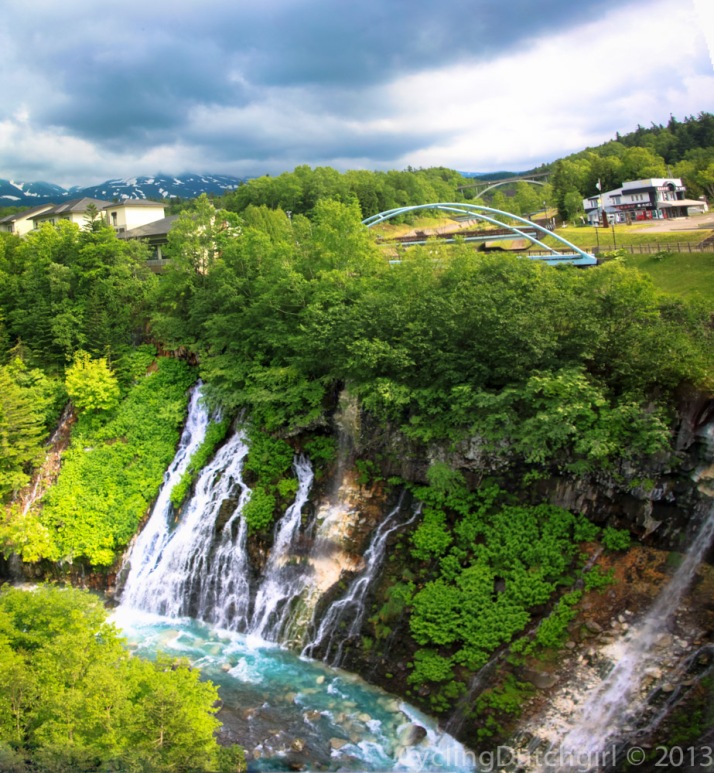 I came across some sort of attraction judging by the 5 tour busses parked at the road. So I had a look. It was a blue lake, 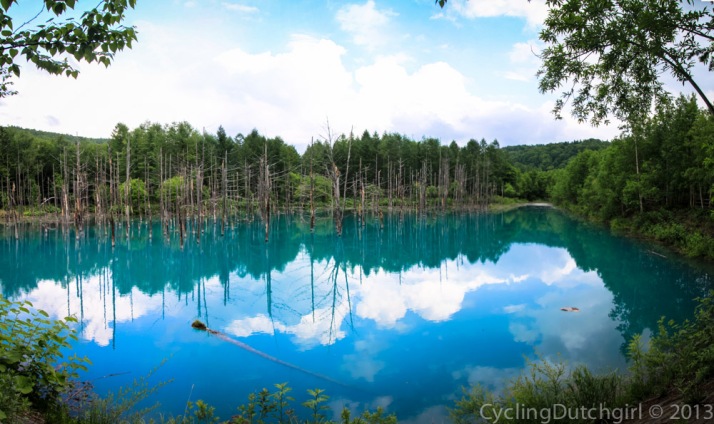 And a lady in red. 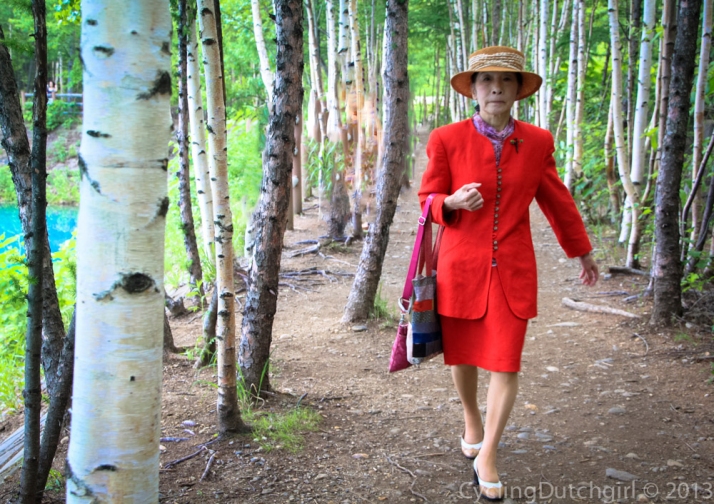 I found another rider house just down the way.

With a whole bunch of Japanese riders! After having an evening together I found out a few of them were heading in the same direction as me.

We joined forces and visited a zoo along the way.

I enjoyed watching the public more than the animals. 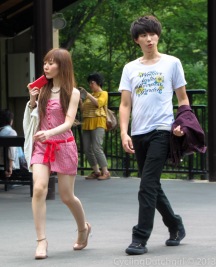 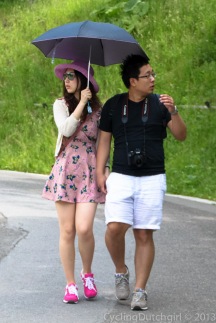 I forgot that I don’t like Zoo’s very much.

We ended up at yet another rider house in the small town of Pippu, 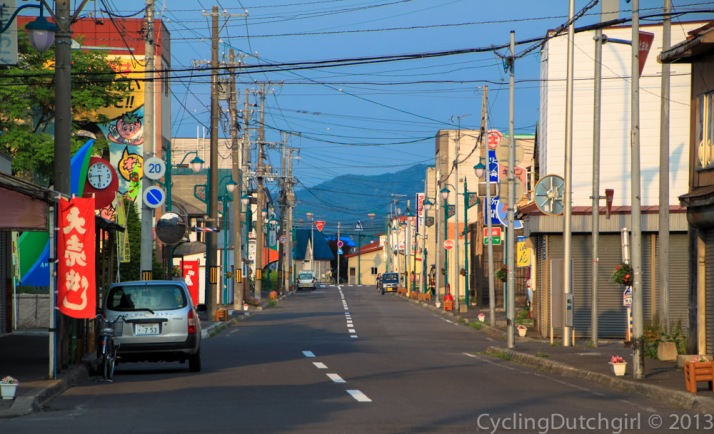 They’re all very different. This one was big, plain and clean and cost the whole amount of 300 yen (about 3 dollar) 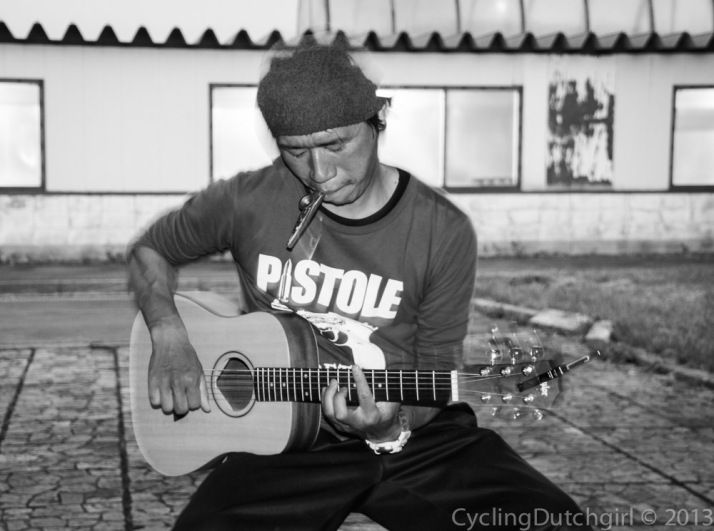 We had a funny evening, BBQ, Music & Japanese-style dancing.

Before all parting ways and continuing on our own trips.