I have made it to mainland Australia’s Northern most point.

94 years after Francis Birtles did.

A true legend, who cycled around Australia a few times before making it up the cape in 1918, quite a feat.

Especially since the first vehicle didn’t make it for another 20 years after that.

How things have changed…

The road still follows parts of the track Frank Jardine first developed in 1864 when, as a 19-year-old, he managed to get a mob of cattle & horses from Rockhampton up this far to settle at Somerset beach. 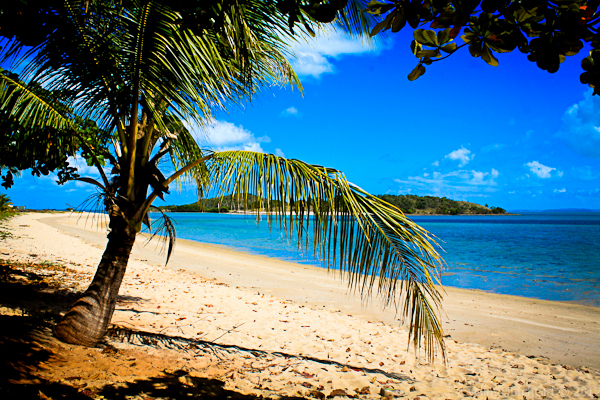 A gorgeous spot where the Jardine homestead stood for many years.

Apparently he wasn’t all to friendly with the locals, even though he married a Samoan Princess.

As a result, when he past away in 1919, he was buried standing up. Now he will never rest in peace. Or so the story goes.

Nowadays the well beaten track up to the tip is not so much hardship. It’s just long.

When I took a break at Punsand bay I was happy to run into  my excellent-coffee-making-friends Alex & Mark again. Especially since I had cycled through Bamaga on a Sunday. When the supermarket was closed and I did not get the chance to stock up.

It’s funny how after being slightly worried all the way up the cape. I didn’t think twice about pitching my tent right on the beach at this camp ground, everybody does.

Next morning it was a little bit surprising to see some tracks coming up the beach. Right up to the tents.

Big turtles, and Dugongs, are part of the diet of the people in the Torres Strait. It’s “Ailan Kastom” (Island Custom).

Even though they are an endangered species the people here are allowed to hunt and kill them for food and use in ceremonies.

I’ve met uncle Edmund when I first came through Seisia, one of the 5 communities at the Northern Peninsula Area. 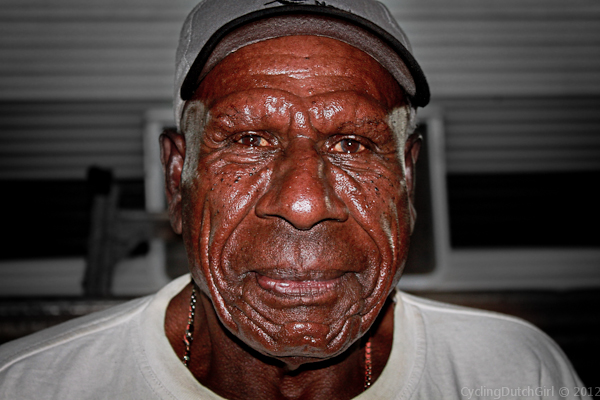 His family came from the island of Saibai and had moved to mainland Australia after WWII. One evening he invited me over to his house to have dinner with his family.

Turtle was on the menu.

I tried a little bit.

Not my thing, but an interesting experience for sure.

After riding all the way up here it seemed like a waste of time to just turn right around and cycle the same way back.

There is much more to explore.

It just didn’t seem like a place you should get out of in a hurry.

I stayed a little while.

Just north of Bamaga I came across the wreck of a DC3 that crashed here in 1945.

It was only 1km from the runway when it hit the trees in bad visibility and crashed, killing all aboard.

Wandering around the area at the tip I was surprised to find out about the Pajinka resort. Pajinka is the traditional name for the Tip of Cape York.

It would have been a super flash resort. For $1526 you could stay 5 nights in one of the villa’s back in 1993 when it was up and running.  There is the remains of a swimming pool, restaurant, a nursery and 14 villa’s.

It was owned and operated by the traditional landowners, the Injinoo People, another one of the 5 communities on the NPA.

It has been abandoned not even that long ago, in early 2000.

Apparently there has been a big fire in the power generator and the whole resort stopped operating overnight. Now the jungle has well and truly taken over.

Twice before in Australia have I come across the Variety Bash, a charity run to collect money for sick kids. They came to Top Springs years ago when I first arrived in Australia and last year in Eulo, the night the shop burned down.

This year they made it from Balmain to Bamaga, 4202km, with a big party organized at the end. I happened to be there. 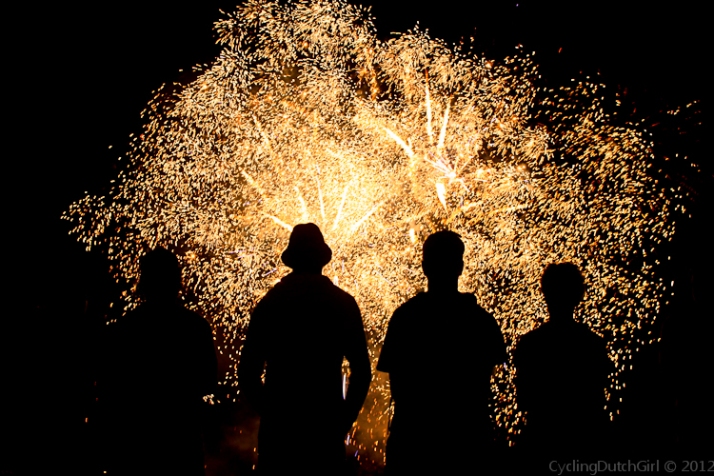 They had the most spectacular fire works I’ve ever seen and a great concert featuring John Williamson and John Paul Young.

At the Loyalty Beach campground I met Paul.

He mentioned a friend of him that lives out on one of the Islands in the Torres Straight.

He was heading out there over the weekend. I figured that sounds like a great little trip so we hopped onto the ferry to Thursday Island from where his mate Tommo would collect us in his tinny. 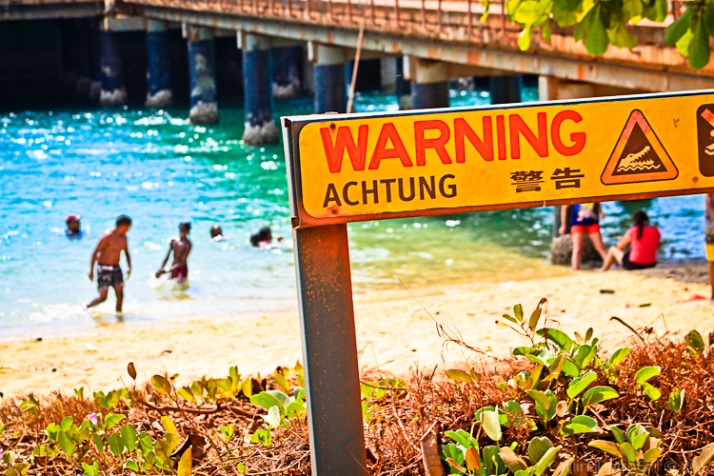 No one around here seems particularly worried about the crocodiles. The kids happily play around the wharf in Seisia.

The odd thing is that they’re real scared of an innocent little frog. A superstition believe is that touching a frog is like touching a dead person. 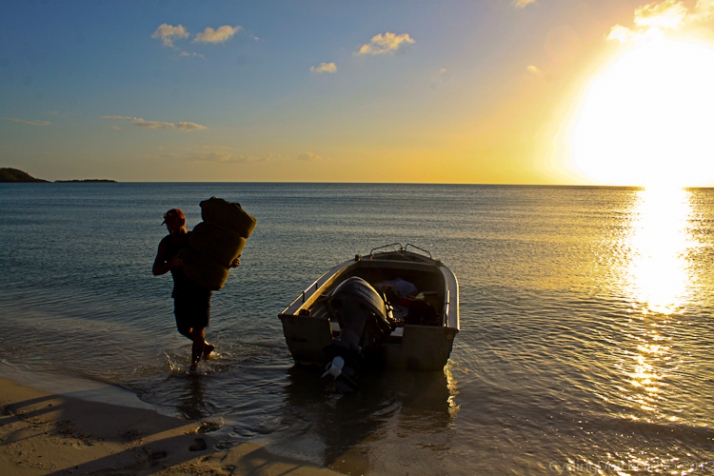 With it’s 204.6 km2 the largest of the Torres Strait islands, but with about 20 inhabitants not very populated.

There is nothing on the island. Well. No shops or people or roads.

There are rocks and beaches and scrub.

And a good amount of wild pigs who are not afraid to come real close.

It takes 30 minutes in a tinny to get over there, a great little ride if the sea is not too rough.

Tommo’s place is amazing, right on the most beautiful beach I’ve ever seen.

We made a big fire, 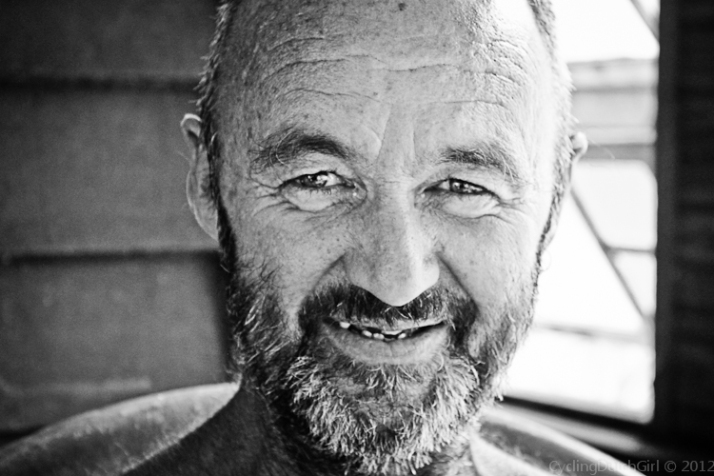 had a few beers, 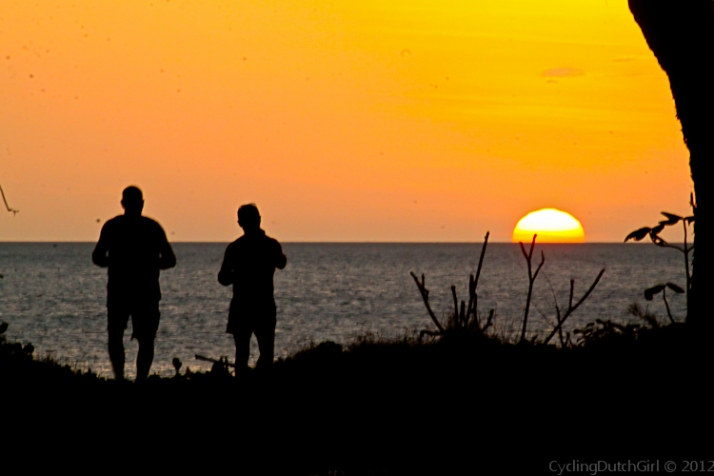 and slept in a swag under the stars.

It was altogether utterly glorious.

And a little more during the day, I have to admit I do like winter in Queensland.

In order to catch the ferry back we needed to get going before sunrise.

The sea wasn’t as quiet as it had been on the way over. The stretch between POW and TI was particularly rough. I sat right in the front of the tinny and as I got a fair beating from the waves I glanced back and I might have actually yelped when I looked at both guys right underneath me.

A big wave nearly made us go straight over. The good news was we were only 50 meter from the hospital.

The bad news, there’s an extreme current and some big lizards floating around in those waters. When you’re off the boat you pretty well gone.

Lucky Tommo got us to the ferry with only narrowly missing a ship on the way in.

Well, that was enough boat rides for me,

for at least two weeks….

More about that next one later.