After leaving Christchurch I found myself cycling through a lot of low hanging clouds. It made me think this should be named ‘land of the low white cloud‘.

Since the roads were pretty flat to start of with, and on either side of the road  I saw fields full of cows and farms with Dutch names, I thought I might as well stayed in The Netherlands. This was soon to change. Not the drizzle mind you. Just the flat bit…

The first four days on the road I met approximately the same amount of cyclist as the past 2 years in Australia.

A couple from Swiss, two Germans ( Gunther & Wolfgang), two Canadians, a couple from Peru and an Australian.

I also met Richard & Stani, who happened to be my facebook friends for ages, we nearly met over a year ago in WA.

Then I came across Tony & Margaret, from New Zealand, who instantly became my hero’s for just having cycled through some extremely tough country on private farm tracks. They gave me some useful tips and good information about places that, despite of what ladies in tourist info’s might say, are great for bicycle-travel.

But even more than bicycles I saw motorbikes on the road. Chatting to two friendly blokes one morning I discovered there was a motorbike rally down at Hororata. I just came from there and it didn’t seem like a bad idea to head back and hang out with the motorbike-crew for a day or so. 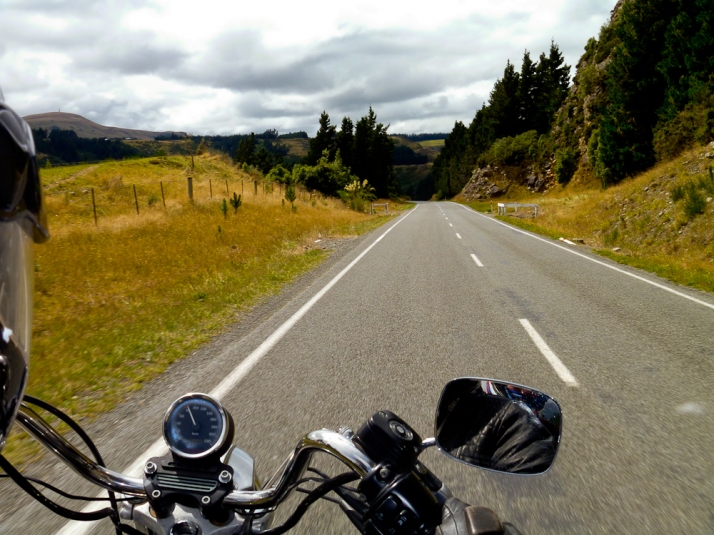 As expected it was all fun and games, and a fair amount of alcohol thrown in.

One of the games I joined in was to try and punch each other of little bicycles with a boxing glove on a stick. I had momentarily forgotten that I bruised a rib not long ago.

Lucky I lost from Phil, who ended up being the overall winner. So the embarrassment was little and easily washed away with Speights. The local brew.

(On being asked if we drink Speights in Holland I replied with; “No, we usually drink good beer…” Sorry NZ. But true)

We even got a visit from the “woodstock-girls’ A bunch of scantily clad girls giving away stuff to who ever drinks Woodstock, looking at them I’m pretty sure they never touch it themselves. As I happened to stand next to a bin I quickly grabbed an empty can and ended up with t-shirts, hats and wristbands. Score!

But after this weekend it seemed a good idea to climb back on the bicycle and right off into the drizzle. I discovered poncho’s are a great idea. As long as you have a tailwind.

But to my surprise and amazement I turned of on the Hakataramea road (yes, it took me a while to remember that one) and the sun came out! And all of a sudden the country was beautiful!

I rode up the hill, past a death roo…. a roo?? I thought they were only to be found in Australia. So I turned around and discovered after a close inspection it was in fact a wallaby. They do roam those hills but are, like many animals introduced and not overly welcome.

On top of the pass I couldn’t make out what my height actually was because someone shot the sign.

But heading down I found a most excellent camp spot next to the river.

Looking for my sunglasses the next morning I discovered I rolled them up in my tent. Again. I do need to stop doing so they do not seem to enjoy the experience too much.

The road was just lovely with rolling hills,

wineries and lots of sheep.

I actually had half a plan of where I was heading. My Aunt Mary in Christchurch has pointed me in the direction of Omarama, where she had a good friend whose name is Mary as well.

At first I didn’t see anyone as I arrived at Tara Hills Station where Greg & Mary run cows and sheep. I did however found a peacock and her chick running through the house in a panick. Mary showed up shortly after trying to get them out while looking after the dogs, horses, ducks and the rest. A busy operation.

She did get the chance to take me up to the woolshed where a gang of shearers where shearing.

I didn’t know it yet, but as it turned out I learned a whole lot about the quality of New Zealand merino wool over the next week or so.

I had planned to do a bit of a loop and cycle a few interesting looking roads on my map when I picked up a newspaper on saturday morning and read about the cavalcade.

The Cavalcade is a yearly occurrence on the south Island, it’s organized by the Otago Goldfields Heritage trust. About 13 trails with walkers, horses and wagons start at different points to retrace the routes of Otago goldminers back in the 19th century.

As it happened one of the trails started just a few km’s down the road. So after seeing horse-floats passing by all day and cycling past their camp Mary took me down to have a look and maybe take some pictures.

That’s when I got chatting to Alastair, the trailboss. 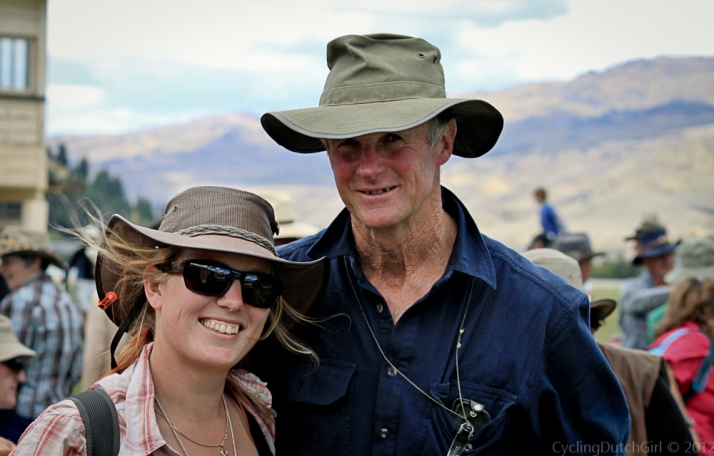 And after a short chat he agreed on me coming along. Not on a horse (remember my last experience?) but as an extra hand, setting up camp and shifting gear. An excellent way to meet new people, see a different side of the country and work on  my horse-skills. Yes she did 🙂

Sarah was so nice to lend me her horse for a little while. But after it jumped a ditch within the first minute, I wasn’t too comfortable, I have to admit. In my defence, I didn’t fall off and I didn’t even scream. Which, surely, must’ve made me look like a pro to the rest of them (… yeah right)

The only reason I didn’t scream was because I had lost my voice. I think it’s because I’m usually by myself, and suddenly surrounded by this crowd, I talked a lot (I know, it’s hard to imagine). So after 3 days of non-stop talking my voice disappeared all together and all I could do when the horse jumped was a little yelp. Lucky me.

Or as Johnny put it; ‘You sound like a squeaky toy…’

Johnny likes taking pictures too, like this one of me.

It was a rather eventful week, while most people got up the hills on their horses, I drove 4wd-vehicles (with heavy floats) over little muddy tracks. Enough to get the adrenaline pumping.

I did get the chance to get up the hills one day to see what it’s all about. 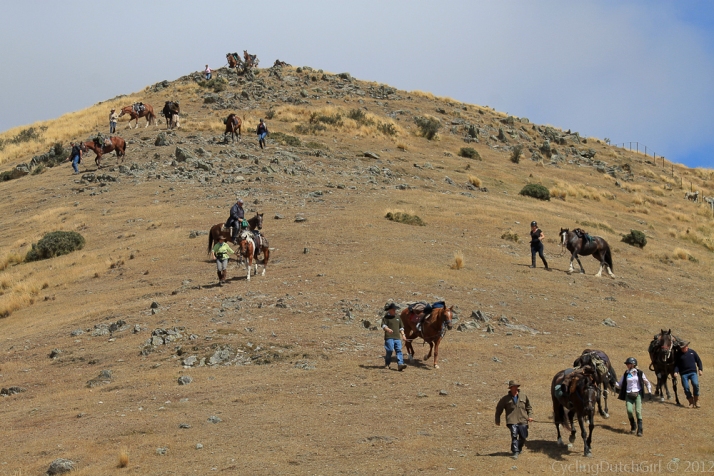 Graham let me have a go at riding his horse,

It was only later he told me his horse doesn’t actually like girls much and has a habit of nipping them. It hadn’t happened to me, but only because he let me ride after the horse had a full day in the mountains so was probably too tired to care…

Some evenings we camped and others we stayed in woolsheds on different properties where the owner would come and have an informative talk about the size of the properties, the amount of sheep they have and the quality of wool. There, I remember some of it. (13 micron = good)

Every day it was quiet a mission to set up the kitchen and ode to the cooks for managing excellent meals with the limited facilities!

The last night we had a dance in one of the woolsheds where even the woolpress danced along.

I took about 6million photo’s during my week on the Cavalcade and as promised here’s a link to the webalbum, where you can find most of them. Or check out my Facebook page.  If you were there, go and have a look. And if you were not, but you got about an hour spare and nothing better to do… you could have a look at them too.

All the different trails ended up in Cromwell where a massive tent was set up for the ” Gold ‘n’ Hoedown” another big party with the likes of Marian Burns. I thought her name seemed familiar and then she mentioned she was at Tamworth a month ago. I must’ve seen her there.

I had a wonderful week and made some great friend. And I’m sure I’ll meet some of you along the track. Thanks to all involved!