Get your motor runnin’….
not as easy as it sounds sometimes.

Since I’ve had a problem leaving places ever since I started this trip it didn’t really come as a surprise that when departure day finally arrived, and we got up all early and excited to dodge the traffic and get out-of-town, my newly bought motorcycle had a different idea…

Flat battery, It was a warning for what was to come.

But hey, what can I tell you about the Bullet… It certainly does have an excentric character. Mine was Moody and Grumpy and doesn’t like mornings. It decided to go against me and stop in places I didn’t want to stop. I couldn’t get into 1st or 4th gear either. Thats difficult going.
After a few days of clogged up petrol filters, missing spokes, broken footstands, cracked bolts and worn out clutches I desperately rang Balu, our Bullet Guru (www.bulletwallas.com) who has tried to tell us all we need to know about bullets and traffic in India.
He was extremely sorry to hear about my problems and told me he had just fired the mechanic that worked on my bike… his work was rubbish…. tell me about it! Instead of trying to begin sorting things out he send me a new bike + mechanic!

According to Mick you should ride a bullet ‘like you’re dancing with your great grandma…’ now it happens I did dance with my great grandma and it was nothing like it. But I got the point.

Our little group consist of Margot and her friend Rjimke who flew in from Holland and took some ‘proper’ bread with her! Something I’ve missed, only a little.

And Mick on his BMW. And very happy with his BMW. Especially each time we’re standing still ’cause either Margots or my bike broke down… again.
It’s good being together so we could try to manage the crowds while Mick fixes our motorbikes 🙂 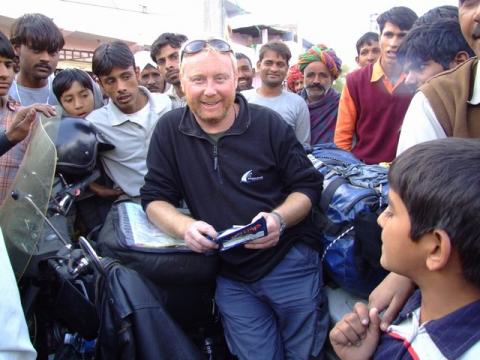 Cause obviously we’re a bunch of helpless girls 😉
No seriously. I don’t know how we would have managed without him. 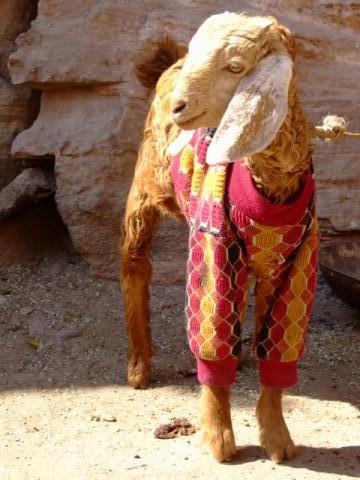 Where ever we go people seem surprised and wonder what the relations are. So sometimes Mick has three wives. Other times he’s a friend of our fathers who came with us to look after us. Funny enough people seem to believe it as well. 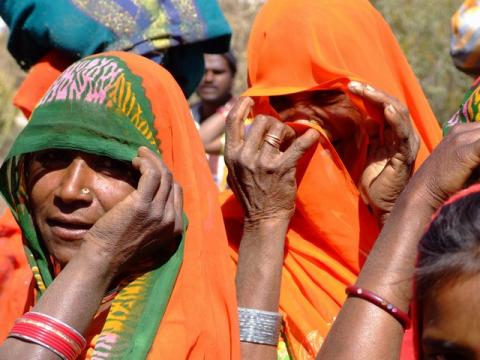 As we got into Alwar it was dark, we were a bit late because of Margots engine sort of exploded. It was a national holiday and every single hotel was booked with weddings, we rode past parades of colourful dancing and singing people decorated with lights and men on white horses, dragging behind them massive generators that nearly drowned out the band.

We finally found a place where the friendly owner let us sleep in the restaurant. We spent the evening (as most) playing UNO and talking about the state of our stool. We’d all suffered a bit of the infamous “Delhi-Belly” so while Margots stool was still liquid Mick had progressed to partially formed. Mine was loose and Rjimke’s compact… but not the right colour yet.
(mine is fine now, in case you wondered..)

The traffic isn’t nearly as bad as I expected it to be. Ok, it is busy in and around towns and you got to be expecting the worse at all times. Apart from your usual traffic participants like busses, cars, rickshaws, tuktuks, motorbikes and bicycles you have to keep an eye out for dogs (…) goat, sheep, elephant, camels, horses, ox-carts and of course the ‘moving roundabouts’ or holy cow. Everywhere, all of the time, they will find the most inconvenient place to cross a road or take a break. You’d think they do it on purpose..
But when you start understanding the rules, go with the flow and don’t use the mirrors or you’ll go mad, it’s surprisingly pleasant motorcycling.

One of my funnest days was in Jaipur where we strolled around and met a lovely elderly couple that made us tea and showed us the house they live in. Then a man took an ‘old’ photograph with a very old camera and developed it on the spot.

Afterwards Mick and me rode rickshaws through town where the reaction from people around differed from pointing, shouting, laughing and jumping up and down to being completely flabbergasted by seeing a white (more red actually) woman cycling the rickshaw…

In the evening I went to a proper Bollywood movie with the necessary car- and rooftop chases, dancing and the hero, for a reason unknown to me, licking ice cream through the 3hour lasting spectacle.

Due to dismatching initiaries Margot and Rjimke headed west from Jodhpur while Mick and me continued south.
When we stopped for a cultural justified break at Kumbhalgarh fort we noticed 12 black bullets (hard not to notice..)
Turned out to be a tour group riding around Rajasthan guided by Dutch girl Tes, who rode home her own Royal Enfield back in 2001!

And so past forts, nature reserves, Jain temples and villages we arrived at ‘the Ranche’.
The place where Rjimke & Margot would come to as well after their camel-adventures in the west.
Horse riding is the main attraction at this animal filled guesthouse. Owned by a proper Maharadja who sits around keeping an eye on his dogs, parrots, chicken and of course the proud Merwari horses. A special breed that’s good surviving in desert conditions.
I was told, not having much experience, there’s no problem riding them because they’re very calm.

My first ride was ok, except for the horses not getting on too well so mine kept kicking Micks.
My second ride, after Mick left to Pakistan in order to get back home to Scotland in time, was less succesful. 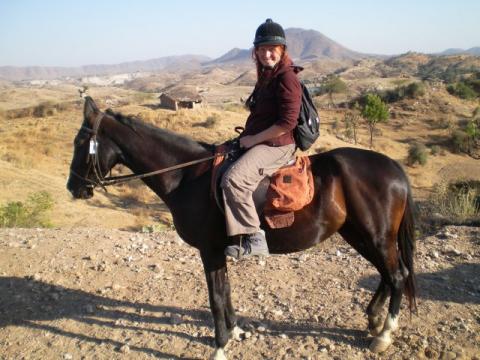 After only 15min my horse got a big fright of two monkeys jumping on a wall so she turned around and started galloping at a speed I don’t even reach on my motorbike… Just when I started to think I might be alright and stay in the saddle a third monkey jumped in our path and made the horse mount… And me fly off. Bugger.
I landed on a small wall that kicked all the air out of my lungs. There and then I decided I might just leave the horse riding to my sister Judith from now on.

Lucky I came away with just a few bruises and scratches.
And even luckier I wasn’t carrying my camera this one time!

My first day alone on the bike.
The scenery keeps surprising, winding roads through hills, along rivers and over passes.

And so quiet! I never imagined it possible in India. I guess my mind just wondered a bit and in a small village I noticed the wee puppy crossing the road too late 😦 I couldn’t break in time and I couldn’t avoid riding straight over the poor thing. I’m sure I killed it but couldn’t stop to check. Balu had told us whatever happens keep going or you can get in trouble. Rules, and people, are different on the road in India. I felt sick for a good while after.

Only coming up to mount Abu, with its 1772m the highest point in Rajasthan, I started to feel better. Untill my bike said pruttelpruttelprfft and stopped mid-mountain.
Only overheated so no need to panic.
As I sat watching the monkeys a car pulled over and a very animated, enthusiastic man came jumping out:” You got problem!? … I have bullet!!… It’s too hot? a yes yes yes… what is your good name?… what is your country?…. Ah yes yes yes!!! My good friend same same!!… Follow me!!”
This friendly and slightly hyperactive mister Sanjay turned out to be a part-time Brahman priest with a car- and motorbike rental company and he has ‘a thing’ for the Royal Enfield.

I followed him into town where he introduced me to his good friend Hermant. Born in mount Abu, but living in the Netherlands where he works as a yoga-teacher.
The last view days he and his friends have been showing me around, taking me to restaurants,temples and invited me to come and stay in their home. A very pleasant time indeed.

Another nice surprise was Margot en Rjimke suddenly showed up on their Bullet just today! So again we have a few days together before we’ll go our own way again.

Lookin’ for adventure
And whatever comes our way 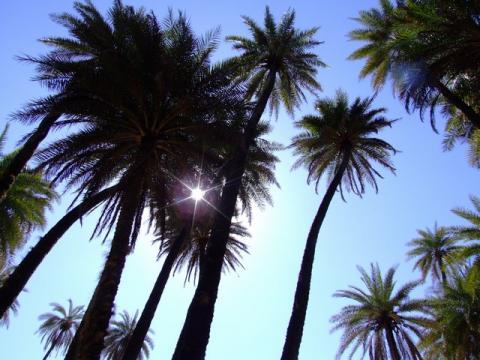