Warburton is one of the Aboriginal communities in the shire of Ngaanyatjarraku. Yes… I’ve been trying to pronounce that too. 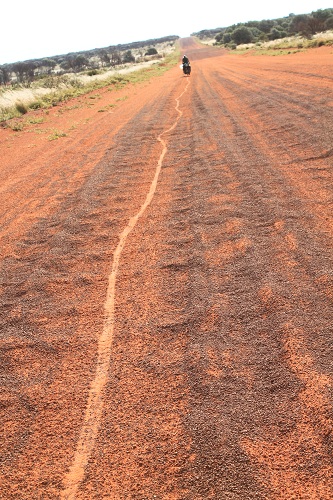 We arrived early in the morning after a mosquito-riddled night in a clay-pan just before town only to find warning signs everywhere saying Murray River Encephalitis and Ross River Virus are around.

We also ran into a group of guys we met a few days earlier at Warakuna.

Nabarlek  and the Sunshine Reggae Band are from remote aboriginal communities in the Northern territory and happened to be on tour.

They were going to play in Warburton on Wednesday (this was Monday) . What better excuse for a break do you need?

It’s still odd to see how, also here, the bowsers are locked up in cages and there is a massive fence around the campsite (broken in many places). And notices urging you to lock up petrol if you are carrying any.

Troy , who arrived on a postie-bike and was heading to the west coast as well found out how true when he saw his fuel tank open in the morning. But he had Opal. No petrol to be found for 600km either way.

Some of the band members went out hunting one evening so we found a freshly killed rabbit in the fridge that morning. Stuart got all excited and decided to gut, skin and cook it. 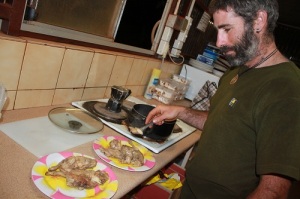 Sadly who ever shot it didn’t gut it immediately so it was unpalatable (Stu won’t let me say rotten, and credit to him he did eat his share…).

We went down to the main park in Warburton on the evening of the concert.

I really enjoyed watching the girls and guys dance.

I didn’t join in because I’d feel ridiculous. Wow, they can dance!

Girls and boys would gather in two groups on either side of the stage and would take turns running to the middle, shake their hips (girls) or do some other cool moves (boys) for about half a minute and run back out. When the music was really pumping the older crowd, who’d all sat around the sides well away from the stage would do the same thing. Run in, move like crazy,
and run back out. A fascinating sight. 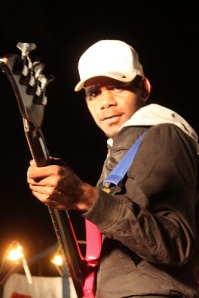 As we rode out of town the next morning we came through a beautiful little creek with water! 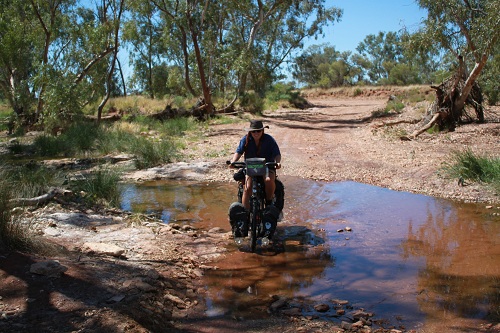 It may not seem weird for us Europeans, but again, this is Australia and like lakes, creeks are often dry in this country. It would’ve been a great place to have camped these few nights and it also explained the overwhelming presence of mozzies in the town.

Yet again water was the issue. By now we had our system so advanced that we could carry 54 litres all together.

You can imagine this heavy load on the corrugated and sandy roads asked a lot from the bikes. But yet again, my bike passed all tests with flying colours while Stu’s bike…. ehm, well… Did not.

It is great that he’s as good with wire as he is. Since the whole bike was by now held together with the stuff.

With his hunting background and a very keen interest in everything crawly and moving he tries and catches everything we see, like innocent little lizards. 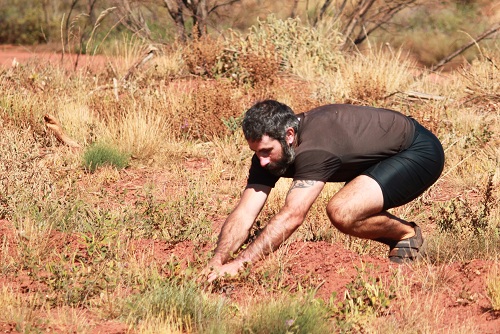 Lucky for most of the little creatures he caught they were either too small, 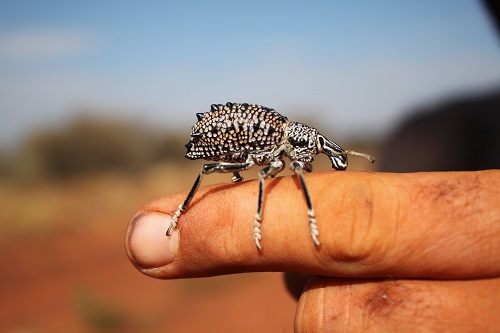 or we weren’t real hungry at the time… 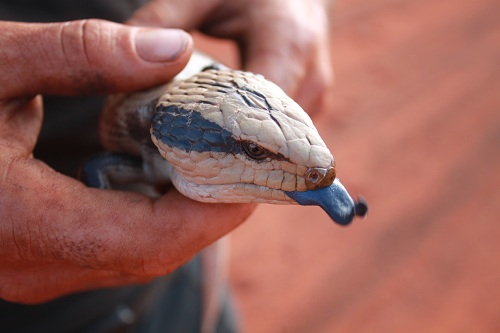 Or the night he called me to say:” Get out of your tent! Here’s the biggest crazy looking spider you’ve ever seen! ”

And me replying by making sure my zippers are all firmly closed, no thanks, I rather keep it that way at night with massive spiders around…

That evening, as we noticed dark clouds rapidly closing in, we dived into the scrub and pitched our tent just in time to keep dry during the night of thunder and downpour that followed.

It seemed very strange to me to have so much rainfall and even hail in the middle of the desert. It does make for some stunning views and rainbows!

Lucky all had cleared the next morning. 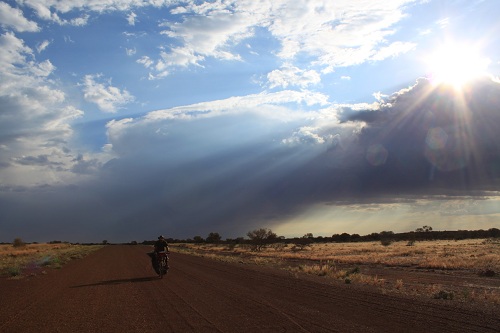 And we rode untill we spotted a cave on the side of the road. Upon closer inspection we found a little waterhole and a pretty good spot to sit around for a while.

Which we were forced to do since Stuart’s legs stopped working. He had said his head was a little sore but I hadn’t paid too much attention ’till he started shivering and had a temperature.

We figured best thing to do would be to flag down the next car so he could go ahead into town, have a few days rest and I’ll catch up later.

The first car that came along told us the road had been closed for all traffic due to the rain. They happened to be the people who publish “Camps Australia Wide“, Australia’s premier guide to free camps in Australia.

They took Stuart to Cosmo Newberry, a community 150km down the road.

His gear didn’t fit in their car but a work ute pulled up right behind them and managed to throw all his gear on the back and off they went. 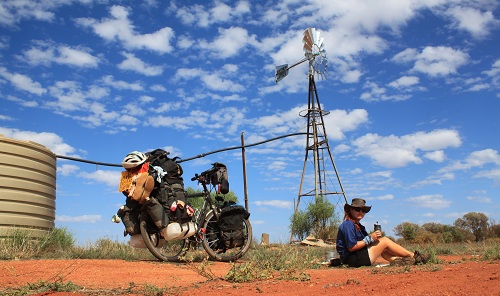 And I was on my own once again.

A little longer than I expected to be.
Apparently there was a little more wrong with Stuart than I’d thought. A big fuel truck pulled up the next morning to tell me he had been taken out by the Royal Flying Doctors and is now in Kalgoorlie hospital… and if I wanted a lift in. 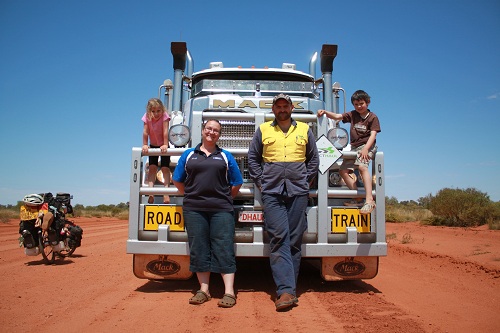 I figured there wasn’t an awful lot I could do about it now so decided to keep cycling. The same truck passed me again the next day and stopped to see if I was doing alright and hand me a few cold drinks.

Suddenly I saw something unusual appear over the hill, I wondered if it was a camel or a cow, but as I got closer I noticed it was Graham!

Of course I only found out after we introduced ourselves… , although he seemed to know me already… “You must be the cycling Dutch girl!”. Turned out I knew him too, his excellent website  about cycling dirt roads in
Australia has been in my favourites for yonks. It’s both hilarious and informative.

There’s a lot of them along this road, I guessed about 1 every 5km. Graham already counted 14 in his first 20km that day. For a final count check out his blog… 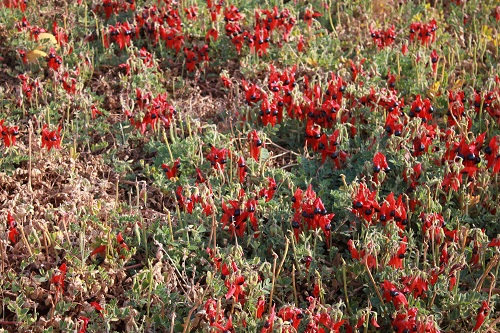 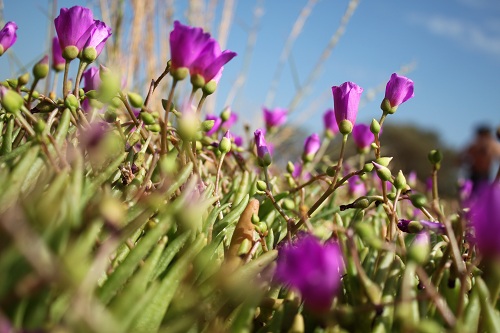 Rina is the practition nurse in Cosmo Newberry and as soon as I arrived she handed me a cuppa and told me how very very sick Stuart was. She then told me I could stay in the guesthouse and plucked a handfull of fresh veggies from her own garden because I need fresh food 🙂 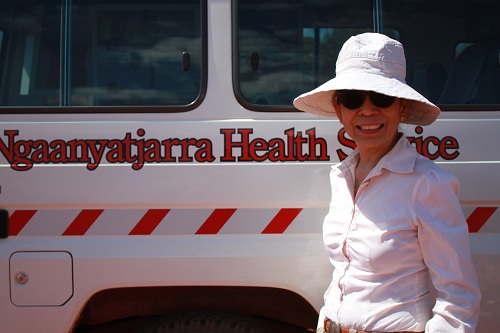 She also passed me on the road the next morning and stopped to show me what other plants I can eat out here, and to check if I was drinking enough water… (I was.)

As  I pedalled further towards Laverton I noticed the road was in excellent condition. 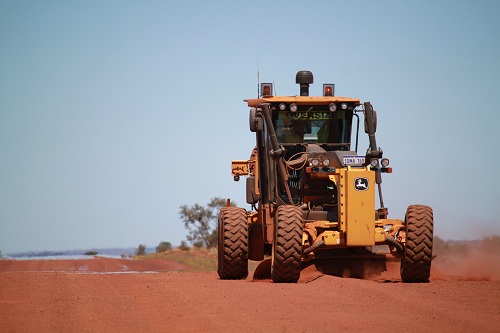 Just a minute later I saw a grader coming towards me. Barry jumped out and told me I am mad.

He’s not the first one to tell me this and I doubt he’ll be the last. Fine, I might be mad but I’m happy 🙂

I thanked him for grading the roads and continued riding.

It was a little bit odd riding into Laverton, apart from smashing it the last 20 km to try and avoid the rain I could see falling in all directions around me it is the very same place I skidded to a stop 16 months ago when I ran into that exploration job.

It was nice to see a statue of a bicyle in the middle of town.

Well, it was actually Dr Charles Laver, who arrived here on his bicycle a few
years before me, in 1896 to be precise, to check out gold mining opportunities and set up a practice. It’s him the town is named after.

While trying to find out what happened to Stuart and sorting out his gear I
got a big surprise when I got the message Linda was just down the road. I spend last Xmas at Linda’s place in Adelaide! She’s been busy touring around Australia in her campervan and happened to be in Leonora. Only 100km down the road. She decided to come out, have lunch and help shift Stu’s gear to Leonora.

Where I could do very little but wait.

So that I did.

6 thoughts on “About Rainbows, Random Encounters and the Royal Flying Doctors”