The Old Ghan, originally called the Great Northern Railway, is a tale of the triumphs of pioneering Australians in a landscape of extremes.

Or so the information sign says. It continued by telling me;

The Ghan opened the way into Australia’s remote interior. Unofficially called ‘The Ghan’, it provided isolated residents with a physical and emotional link to civilisation. During World War II the railway was pushed to its limits, yet barely a decade after peace resumed in 1945, it was rejected.

I’ve been cycling along the old railway line since I left Lyndhurst.

Just out of Lyndhurst a car pulled up to ask if I was ‘the Dutch girl‘ after confirming this they handed me a little envelope. An amulet, made by Talc Alf.

Talc Alf had shown me around his place the previous day. He’s discovered the secret of letters and has explained me what my name means. 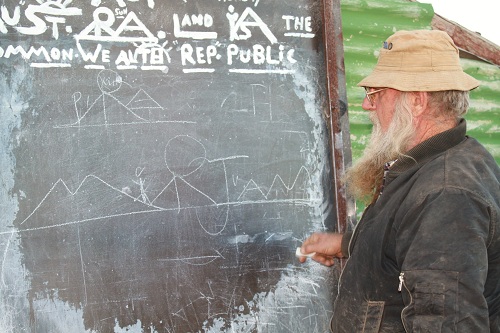 (it was something about a journey and the sun rolling over hills..)

He must have set out to carve my name in stone straight after I left, it’s now dangling of my handlebar-bag. 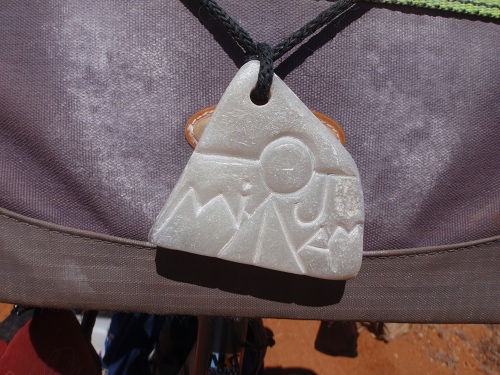 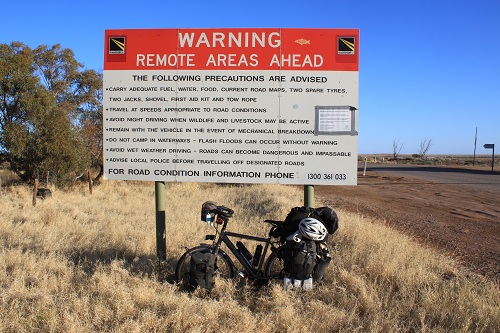 When the railway line was first build in 1878 there was need of constant maintenance, so every 15 or 20 km they build a little house where 3 or 4 man would live to look after the tracks. In places the only job they did was shovelling sand off the lines from dawn to dusk and do it all again the next day. Some of these old railway sidings are still standing in various states of decay. They make for a nice shelter from the wind.

It’s been busy on the road.

With ‘busy’ I mean about 20 cars a day. This is because there is water in Lake Eyre.  Having water in a lake might not seem like a very unusual thing to us Europeans… But out here it is a big deal. The last time this lake, wich lays 15 meter below sea level and is with that Australia’s lowest point, was full was way before I was born. From the road I could see Lake Eyre South. It’s huge. Most people would take a flight to be able to see it properly. I asked what it was like, apparently it’s like a big lake with water in it. Didn’t overly surprise me. Still, it’s special.

Because there is so much of not a lot out here every little thing is a sight.

So it happened I came across a pole. Now, this is not a normal pole, it is part of the overland telegraph line, Australia’s first telecommunication  link to the outside world. Between 1872 and 1896 it connected Darwin with Adelaide and ultimately London. Very little remains of the original line, but here is one of the Cypress Pine Poles…

Another famous piece of wood stands just north of Oodnadatta, the Angle Pole is the point where the telegraph line changed direction.

Another time I was rather surprised to see a big thing on the side of the track waving at  me. I waved back and continued along my way. 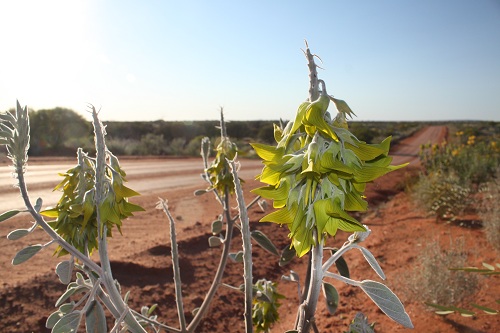 With so few things around it seems I have become a bit of a sight myself, I might be the most photographed cycling Dutch girl on the track this month. Sometimes I don’t like it when big cars just slow down and take a snap shot without even saying hello, or without even slowing down. Mostly it’s fine when they stop and have a yarn on the side of the road.

Or a tea with blueberry muffins…

Or a cappuccino with chocolate on top and a chocolate…

Or pork chops for lunch…

Or a cold can of coke…

It all happens along the Old Ghan.

The Old Ghan travelled past the William Creek and Cowards Springs sidings, during the war the stops were reduced from 10 to 2 minutes due to the amount of alcohol consumed on the train… The hotelier complains were ignored. In 1945 the trains were ordered not to stop at all anymore. However, the train would travel very slow, the passengers would jump off the train before the station, sprint up to the pub, buy their drink and run after the train. Lucky I had a little more time to enjoy a beer in the iconic William Creek Hotel. 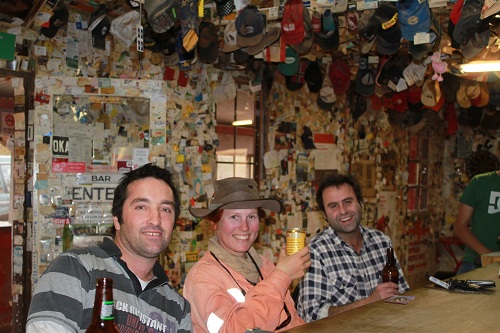 I didn’t plan to have dinner there as well, but three nice gentlemen from Melbourne invited me to have some kangaroo with them. It sure beats pasta & tuna!

It gave me so much energy that I cycled/pushed 100km the next day, a bit of a feat for me on these roads where my average is around 70km a day. 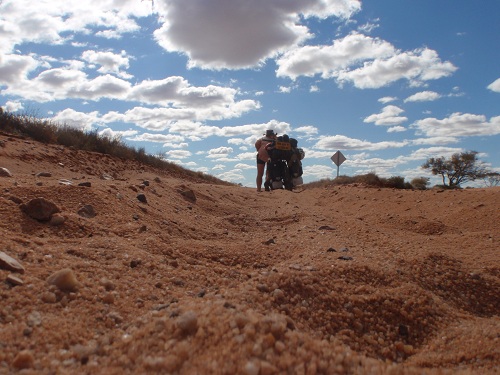 Barry Tydeman and John Glover’s are scientist who came up between ’69 and ’71 to study the desert Goby, a small endemic fish found only in the waters of the Lake Eyre Basin.

“Then we came up. It was a bit wet and we ended up on the tracks because it was too boggy along the road so we were riding along the sleepers on top. John’s driving and we’re riding -boom boom boom boom, like that. I just had this uneasy feeling and I looked around and there’s this bloody great locomotive right behind us! I don’t know how long he’d been there, hadn’t said a bloody boo you know, and I said to John; ‘I think we better get off the track’. He said; ‘Why?’ I said; “Have a look behind you”. He looked in the mirror and panicked and went down the side… The locomotive came past and slowed right up and he slid the window back and this guy said;”You guys alright?” and we said “Yeah… we’re trying to keep out of the water along the track” He said;”OK, no worries” and boom, boom, boom off they went and that was the Ghan.”

Every now and then I get the idea the universe must like me. Like the day I lost my little camera… 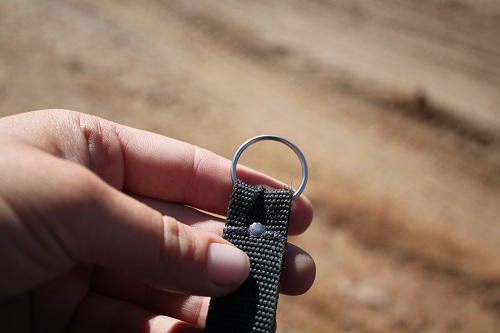 The handle had snapped and looking back through pictures of that day (on my big camera, got two ‘just in case’) I realized it must have happened over 30km ago. The Creek where I was when I discovered was very salty,

So with the amount of water I had going back wasn’t an option…  I kept going. When I stopped a car about an hour later another coming from my direction stopped as well. They had my camera! Two men had found it and given it to them, after snapping a pic of themselves.

So thanks random strangers and thank you universe!

Another example is my 16gig memory card breaking… just after I uploaded (almost) all my pictures!

I would have hated to lose the pics I took only the night before when I pushed my bike to the top of a hill only to be able to see the full moon rising (and setting) over my tent.

Adam & Lynnie Pink Roadhouse in Oodnadatta is, as the name kinda explains, very pink. This is good because I like pink. (my toothbrush is pink, and my towel too)

And so I liked this roadhouse, but that had very little to do with the colour.

More the very friendly welcome I got. A group of 10  travellers who passed me on the road 20 km’s earlier offered me breakfast. (thanks guys!) And I spent the next 4 hours or so charging things, cleaning clothes and myself eating chocolate and drinking coffee. All clean and satisfied I rode out-of-town while a little boy shouted;” Hey! Where’s your man??” …. Now, there’s a question 😉

The very next day the wind was against me. And believe me, in these parts if the wind decides to be against you, you do not move. A lot. 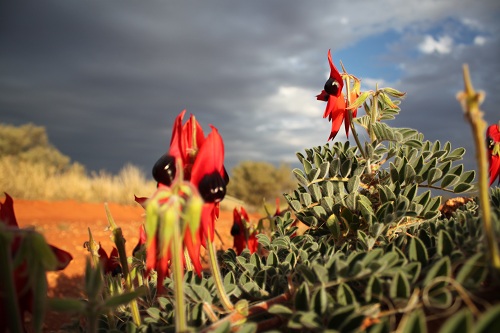 After a windy night at a windmill I made it 15km up the road to Hamilton Station.

Where a sign told me Junk Mail and Jehovah’s are not welcome. Since it didn’t mention cycling folk I called in and didn’t leave for two days.

I was welcomed by Warren the owner. Together with Josh he was the only one around at this time and the were busy with jobs around the homestead. 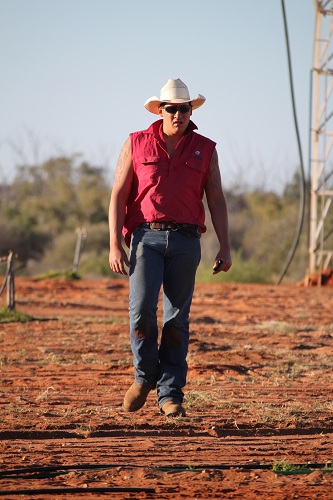 He gave me a room in the girls-quarters where I could recharge and clean both my gear and myself. It was an oasis in this barren country side.

Just after climbing on top of a water tank to get a good shot of the station Warren mentioned I could get a bit higher up for a picture. Only seeing flat plains around me I asked where…. He then took me to the shed where he pulled out a small yellow plane… And he flew me over the property 🙂 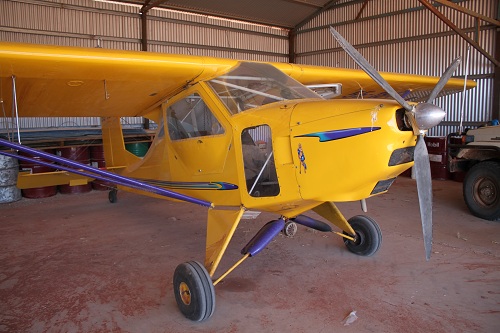 Four of Warrens friend came up for a night on their way cross the Simpson Desert. A good laugh, BBQ and reciting poems later I decided to catch up with these fellows one day later at Dalhousie Springs. 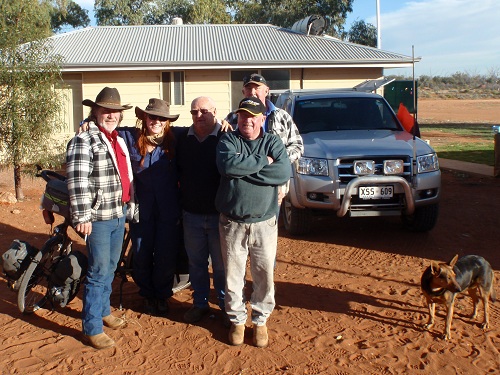 This water comes from the largest Artesian ground water basin in the world (lying underneath 1/5 th of Australia. When it rains up in Queensland the water filters through this basin and comes up in places like here and Coward Springs around  two-million (!!!) years later… But where as Coward Springs had just a little luke-warm bath of about 2square meter, here a huge 37 degrees pool appeared out of nowhere. A great relaxing dip. And when you sit real still the tiny little ‘Dalhousie Goby’ comes and nibbles on your toes.

I did spend the night camping with my four new friends and after jumping in the hot water at sunrise I set of on my tredly while they packed up and got ready to make the Simpson desert crossing. 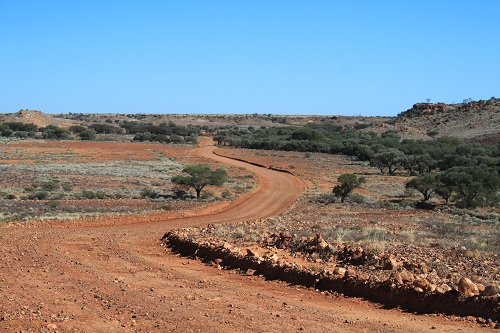 At my next destination all my carefull planning and timing suddenly got thrown upside down.

But more about that next time.
back to top

12 thoughts on “Along The Old Ghan”