I couldn’t wait to get on the road again 🙂 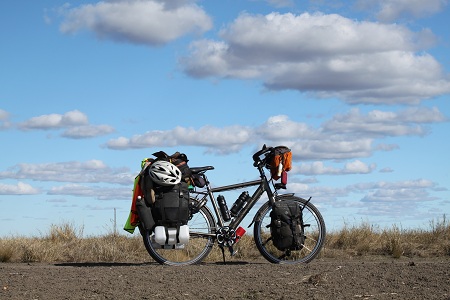 I don’t know if you ever experienced the phenomenon of expanding luggage. It happens every time you spend more than 5 days in one place and allow your gear to breathe freely. For some reason it all expands. So when you try to get it back in your panniers everything is fighting for space, my sleeping-bag buffs up and won’t allow my tools or toothbrush any space. And my clothes are fighting with the spare tubes for the smallest of corners deep down in the panniers. This happens every single time. It takes about 2 to 3 days for everything to fall back in its own space and they all live happily with eachother in my bags. This is why packing up is, and always will be, a difficult and frustrating experience. But I guess, this being the main problem, life is not too bad 🙂 I pitched my tent at Jake’s place. A photographer I’d met on the January Country Music Festival.  Probably the best place to pitch a tent in Tamworth. 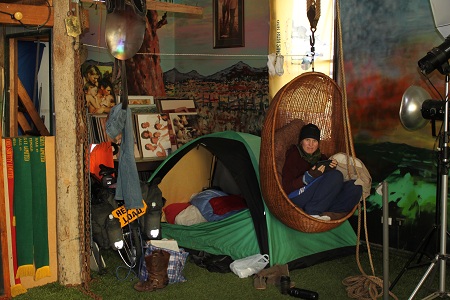 It was exciting setting off on a brand new bicycle and after a few adjustments I got everything right so I’m able to continue without getting sore knees/back/bum. It was easy going, a bit fresh but mostly sunny and a great tailwind pushing me along the quiet country tracks. I passed the race-track I’d visited only the previous weekend when the Wean- races were on. The races have been held out here for over 90 years and is one of the few true Picnic Races still held in New South Wales. 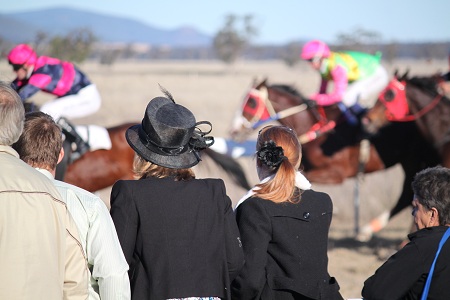 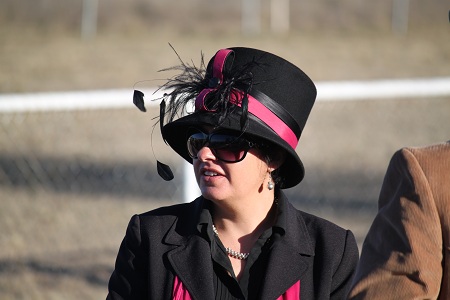 People come from far and wide not only to check out the horses but each other too. Fancy dressed lady’s and gentleman walked around and I felt severely under-dressed. I wouldn’t win any fancy hat competition either. But, at least, I was warm. Wich is more than I could say from some of these girls… It has been a little cold. There’s been a few frosty mornings when it’s difficult to crawl out of my warm little cocoon. But I keep reminding myself that in a few months time I wish it was this cold again… 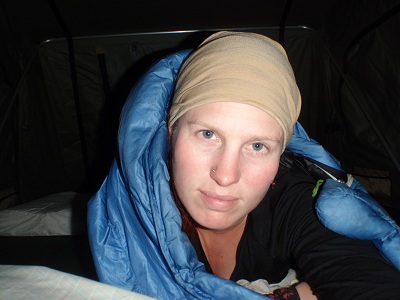 I have got an excellent tip for when you can’t get warm as you just get into the tent at night. Just think of the most embarrassing moment you’ve ever been in (I got many to choose from) in no time your whole face is glowing and the warmth spreads to the rest of your body. Easy 🙂 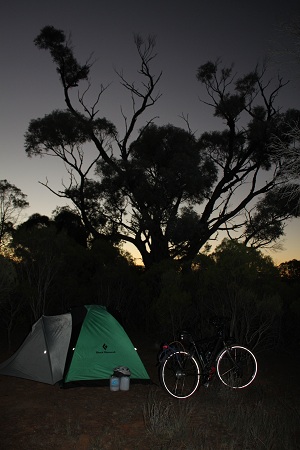 Just North of Boggabri I called into a farm wich happened to be Dennis and Anne’s. I liked the way Dennis had constructed an informal bar between the horse-yards and the tool-sheds. We had a beer and a chat and he mentioned a campdraft coming up. As I left the next day I had the address of his son’s property, 2 days cycling up the road, and a place to go and see the campdraft.

But the weather-gods were not cooperative. It started raining a little bit as I approached Collarenebri. But at least the roads where still easy and the wind was good too. So I happily paddled along while chatting to cowboys and avoiding some cotton-trucks along the way… 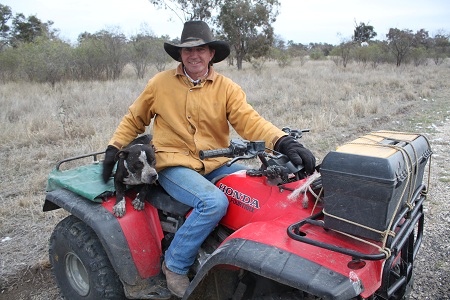 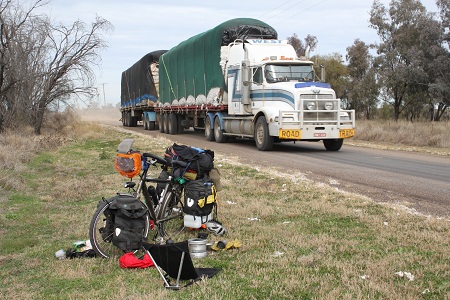 I saw one of them walking across the road and wondered what he was up to, he was sneaking up on cattle and couldn’t understand why they all came running his way. It was because I came up on my bike, he hadn’t noticed… 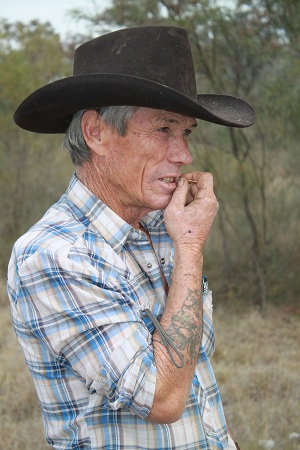 Getting to the homestead itself was a bit of a mission. Once I passed the mailbox it seemed more like an obstacle course then a road. 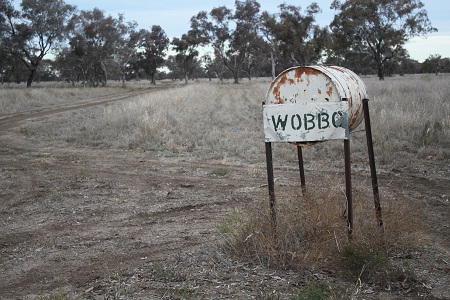 With fences to get through and little bridges to cross. 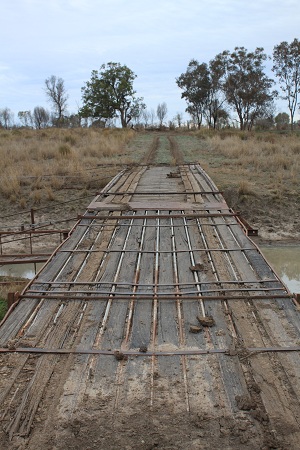 But the effort was worth it as a warm welcome awaited me from the Keys-Family (Mum, Dad & two boys) One of whom was about to get back to boarding-school in Tamworth. With distances like here lots of kids go out to boarding school from about 12 years old. I went to have a look at this particular one when I was in Tamworth and it seemed like great fun to me. A bit like Harry Potter actually… 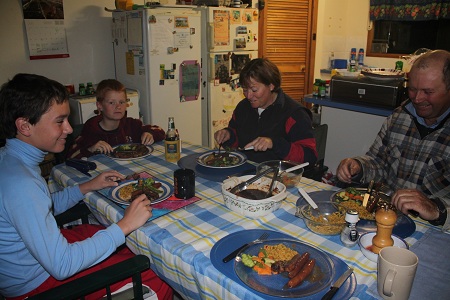 It was still wet when I rolled into Collarenibri. So the campdraft was cancelled. A shame, but I had counted on my day off so I took it. Most of the time I spend in the RSL-Club. This is the Returned & Services League club of Australia. You find them in many towns in Australia and you can often find a good meal and a drink in these places. You could also gamble or play “KENO”. That is a kind of “bingo” on a big scale. And the chance you win is 1 in 40.000. Not unreasonable I thought 😉 But -shock horror- I lost. So that’s the end of my KENO-carreer. 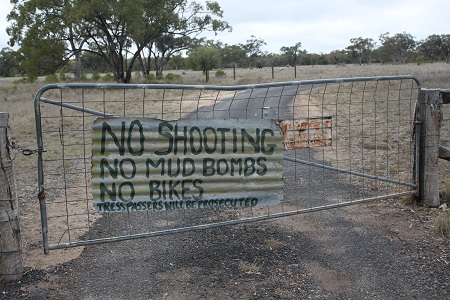 I wasn’t the only Dutch-girl in Collarenibri. The same weekend a crew of about 20 Dutch-girls, and boys had landed to shoot part of a movie at the Aboriginal cemetery. There are only few of those around and it’s special to see how they decorate the graves with crushed coloured glass and artifacts that represent that person. 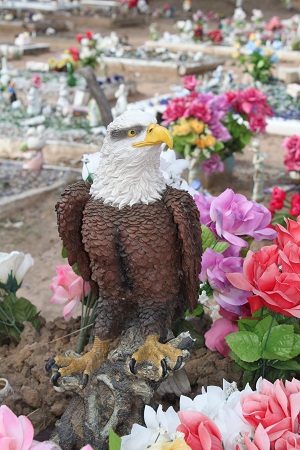 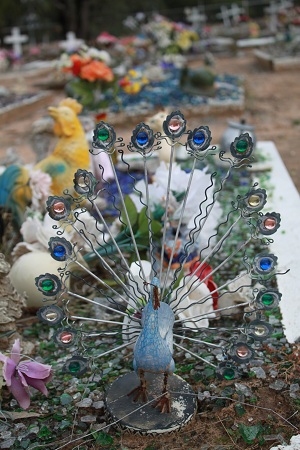 You might recognise these images if you ever see the movie ‘Above your head’. It’s partly shot at this spot… After briefly hitting the busy little Opal-hub of Lighting Ridge where I caught up with Col, A friend from way back ( 17 months) I set off towards the small community of Goodooga. Lucky for me I rode into town at the same time Mike rode out 🙂 He’s a teacher, and so I found myself speaking to children in the primary school.. 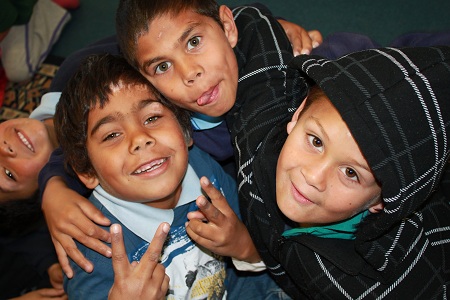 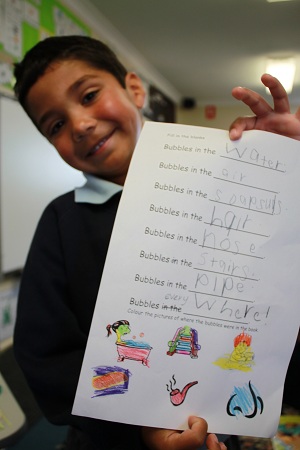 If I thought Goodooga was small with the grand total of 45 students, Weilmoringle  – just up the road – has all but 7! 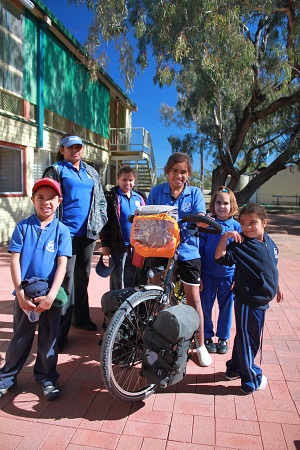 I had to go and have a look in the old shearing shed while there. 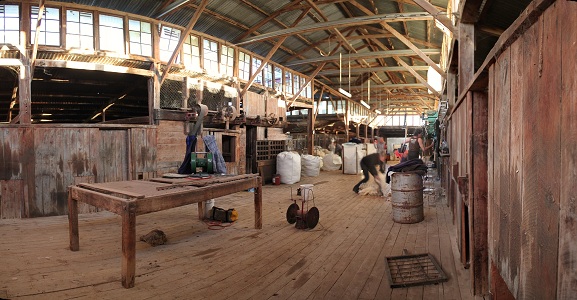 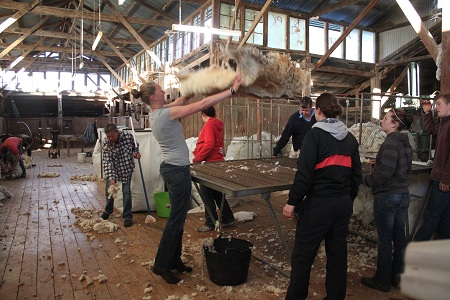 And on the way back I saved the life of this little bird who, for no apparent reason, thought it be a good idea to sit on the middle of the road, I didn’t think so and had it sit it on my hand all the way back to school. 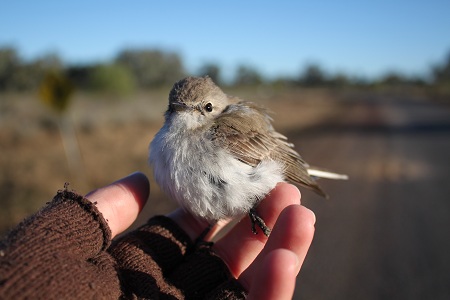 It’s been great riding even though the wind has turned against me. I knew the good fortune couldn’t last… But the road has been magical. I have seen more emu’s and kangaroo’s then just about my whole time in Western Australia together. Even saw a wild pig. And a whole lot of very little… 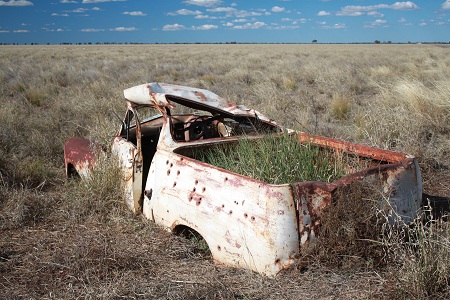 I’ve been told (a few times) that in stark raving mad to be going this way by myself. And also that everybody who lives out this way is crazy. The person who told me knows, because he is from Sydney (…) 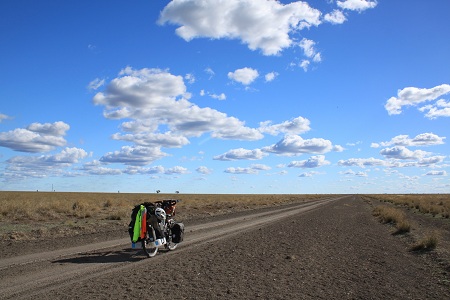 If I would have to choose a place to live, I probably choose similar surroundings, similar scenery, similar space…. Maybe just a different climate. Wich might prove in his mind that indeed I am stark raving mad… 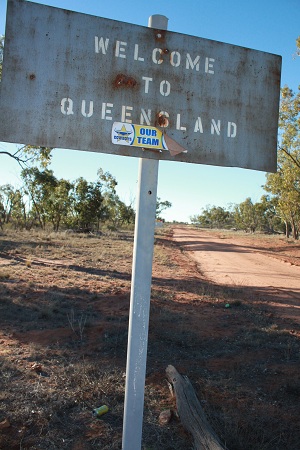 I almost thought he might be right (about the others… not me) when I had a short break next to a grid and a ute came towards me real slow. He had the window open so I greeted him. Without a word the old fella stared at me, drove around me in a circle and headed back the way he came ??? I thought maybe I scared him. ( I do look pretty mean some days, especially after not having showers for a while… ) 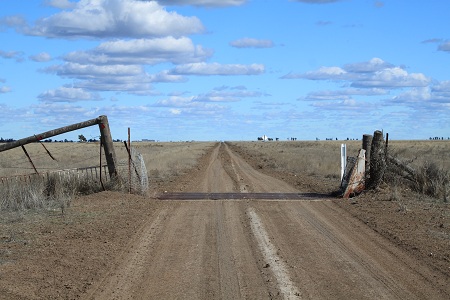 Just before arriving in Cunnamulla I spotted a cyclist on the road. He was going a good bit faster than I was but he didn’t have as much luggage. When he stopped to have a chat I found out he’s the local doctor and invited me to stay at his place. I’m lucky with cyclist on the road around here…  A beautiful big clean house with electricity and hot water! Yay. 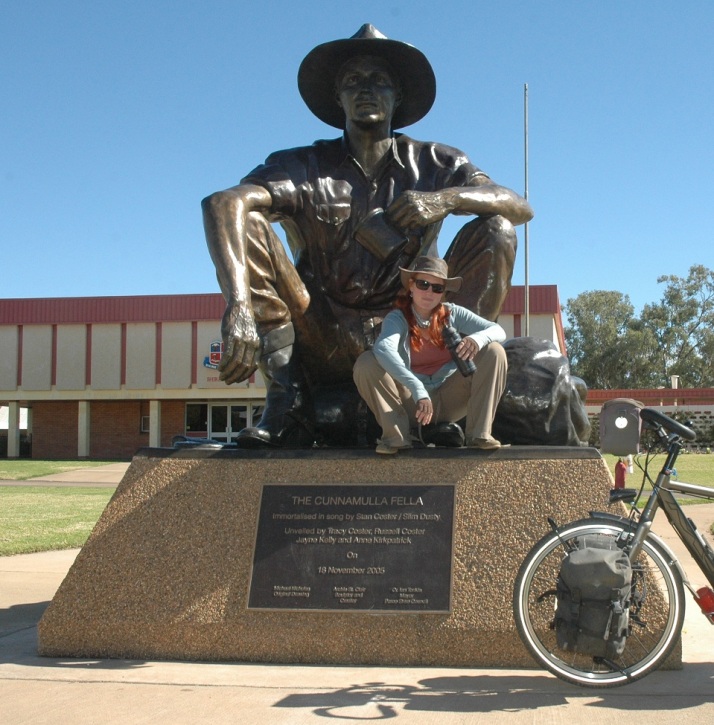 And here I am. In Cunnamulla, famous for ‘the fella’. Just had a wonderful diner sitting around the campfire while whips were cracking all around… And tomorrow I’m moving on, in an exciting new direction… Seeing things  I might never see again. I’ll let you know.