I rolled into the small country town of Braidswood on a glorious afternoon.

It’s worth mentioning this since the weather has been everything but great my last few weeks in Australia.
My newfound surrogate-parents,  Robert and Joan, had mentioned the rodeo in town this weekend and the cattle-sales.
I have not seen a cattle sale-yard before (I saw the sheep-sale yards…) so went to have a look.

Many men with hats. This was good since I like ehm… hats.

When I arrived at the rodeo-ground the preparations were in full swing. So I parked my bike between farm-ute’s and horse-floats, put on my hat 😉 and helped setting up.
Yeehaa!

The sun kept it up the whole weekend… 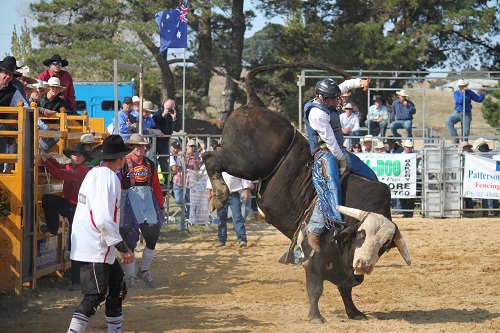 But, naturally, as soon as I set off on my bike it started to drizzle. Via my newfound ‘mum & dad’ I got some contacts on the way out. So I stopped off at a farm where I was spoiled and filled up with steak, beer, pancakes and ice cream. 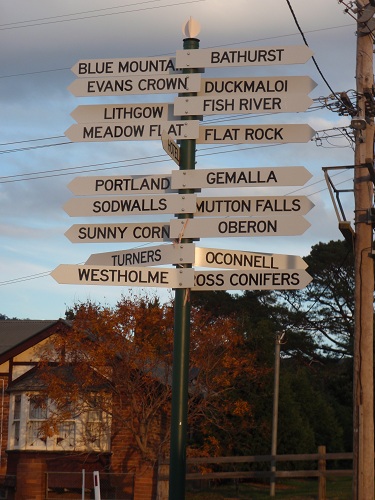 I set off along the Nerriga road. Mainly because on the map I’ve seen places named; “Duran Dura”, “Wog Wog” and “Tomboy”.
A dirt-road, with a little more traffic then I expected. Some serious ups and downs and the pub in Nerriga. 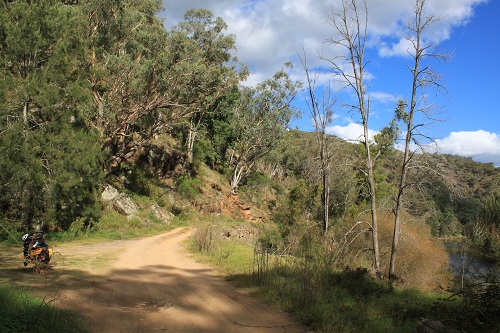 In the pub in Nerriga a man took one look at my bike and told me I couldn’t cycle up the next hill. I find this an unusual statement. Just because he couldn’t do it doesn’t mean I can’t… So I cycled up the hill. And called in at the chestnut-farm at the top where I stayed a day picking chestnuts , drinking beer and watching a man and his bird…

what else to do on a rainy day?

Cycling along I saw a honey-place. I like honey so stopped and had a coffee. While the bees where buzzing about, doing what bees do I had a chat to the owner. He came to the conclusion I needed energy and stamina, so he gave me three little packs of super-honey. Bee power. And a bright yellow cap. I cycled real fast after that. And uphill too!

When I stopped to take a photo of a cute cottage,

a car pulled up, the lady lived in that cottage and migrated from Uruguay to Australia with her husband 23 years ago. Now they are restoring the cottage and having a South-American-style BBQ. If I’d like to join 🙂

So without much trouble I reached the old mining town of Hill End the next morning.

Once the largest NSW inland city with 52 pubs because of a massive amount of gold in the ground. Now it’s merely a ghost town with a nice little shop where few people mentioned the road I intended to take was closed.

After some more inquieries I found out there had been a landslide and cars couldn’t get past. Motorbikes could, I was told in the pub. So, logically, a pushbike could too.

I assumed that because of this the ‘Bridle-Track’, as it is known, would be quiet and traffic-free.
I was wrong.

I chose a holiday weekend to ride through the most popular camping spot in a 500km radius (well, so it seemed) Every spot at the river was jam-packed with 4WD’s, tents, kids on cross motors and men with chainsaws (just for firewood… I hope)

Just before the landslide area I ran into Terry. Terry build a house in the valley and was just gathering leaves to burn that evening. I joined him for a cuppa and the fire. And by gathering our supplies we managed to cook a nice meal that evening.

Back into the real world and onto real roads with real traffic I decided to stay a night in the masively un-appealing town of Bathurst (note; on a nice day in a good mood it probably is a lovely place…)

I cycled up and up and wondered why everything felt a lot harder then I thought it should. Surely one bad night sleep wouldn’t do this to me? The answer came a little later as I said good bye to a young family who’d invited me for lunch; “Don’t you need some air in your tyres?” He shouted as I rode off… ahhh, that explains a lot. Oops.

I do like this part of Australia eventhough at times it seems a little hectic. Like when I came across the Blue Mountains back to Sydney.

It was the end of a bank holiday weekend. The lack of shoulders and some sharp little climbs made it slightly hazardous. Maybe the fact I don’t like traffic noice so I cover it with my music and the ungoing drizzle didn’t help… could’ve all together made for an unpleasant experience. A massive traffic jam snaked itself all the way up the mountains. So I happily cycled past the lot, all the while thinking that eventhough it has been said many many times… Surely I’m not the mad one…
Even I sometimes doubt it, like when I had to return 4 times to a massive viewing platform before I could finally see ‘the three sister’ through the mist. I’ve got three sisters myself and can tell you, they look nothing like it. 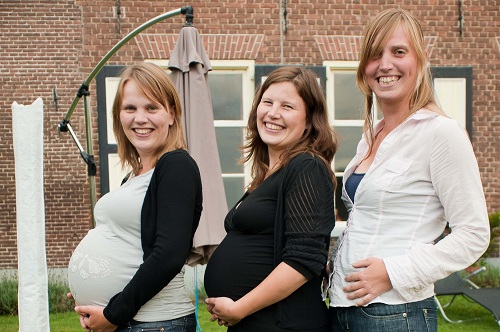 I had the pleasure to be hosted by Leigh I met a long time ago (well, feb last year) when I stayed at a big motorbike-gathering. A very keen cyclist. He showed me around Sydney on my last visit and now he took me to some beautiful viewpoints and Katoomba. I have to take his word for the beauty of the place because all I saw was clouds… He did accompany me down the mountain on a lovely downhill ride. 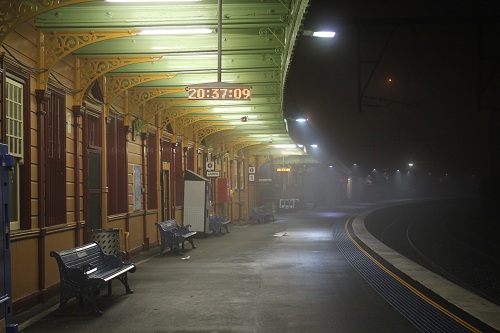 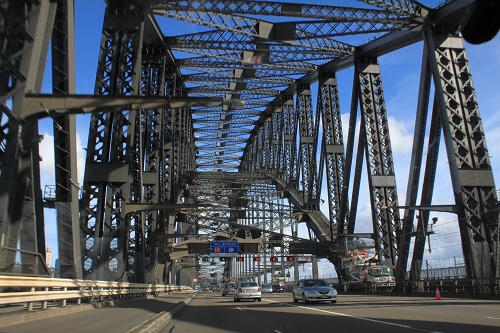 The thing is, I’m not done…

9 thoughts on “Not The End”