As I left Perenjori I struggled and wondered why it all seemed so difficult.

Could it be the extra wheel behind me with an extra set of panniers? Surely… I wasn’t carrying that much more…

Slowly I started to realise it might just be me being severely unfit… Months of driving tractors doesn’t do much for your health. It does for your bank balance though 😉

So off I went slowly heading East.

Through the rabbit proof fence that stretches over 3000 km in a failed attempt to keep vermin out of the farmlands.

Into the bush. Surrounded by scrub as far as I could see and a lonely red dirt track stretching ahead. Just the way I like it.

Setting up camp at the end of the day, alone with the moon and the stars made me realise once again how lucky I am to be out here. With my bike.

One thing I didn’t expect was how cold it gets! I know it’s winter.

But it is Australia too… And surely Australia is a hot country.

Not so. At night in my tent I was fine. But getting up in the morning is more difficult when everything is covered in a thin layer of ice… 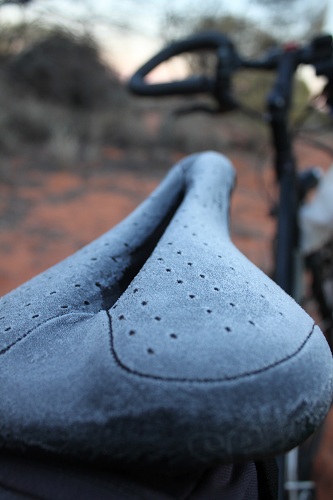 Even the water bottles I left outside my tent were frozen solid!

But during the day the temperatures were excellent. And so I kept going, the cycling got easier with the day as I got back into the swing of things. 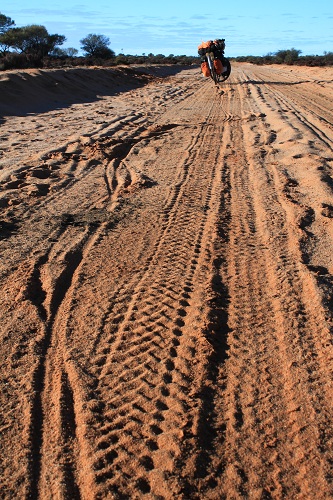 One afternoon I realised I had cycled the whole day without hearing any human noises at all. I had heard or seen no cars, planes, generators or power lines… Nothing. Just my wheels on the gravel and some birds. I can’t remember a day like that before. It was great!

That evening I realised I’d lost my pump. That could be disastrous if I happen to get a flat ( I refuse to believe I ever will, although history tells me different… I carry the pump just in case)

In the morning I saw a cloud of dust coming my way. A car. It stopped so I asked if he could look out for a pump…

At the end of the day a 2nd car came from the other side. He stopped and had indeed found my pump, about 120km back along the track… The first gentleman had send a message on his 2way so who ever would pass knew to look out for me & my pump.

Two days later I got a flat tyre…

One small problem I had was my foot. Something was wrong and I had no idea what. But it was a bit sore and it got difficult too walk. Lucky I don’t walk much. But it got so swollen I couldn’t fit my bike shoe any more… So I continued with one bike shoe until I reached Youinme mine.

In the late 1800’s gold was discovered in WA and thousands and thousands of people flocked to this part of the country to try their luck in the mines. 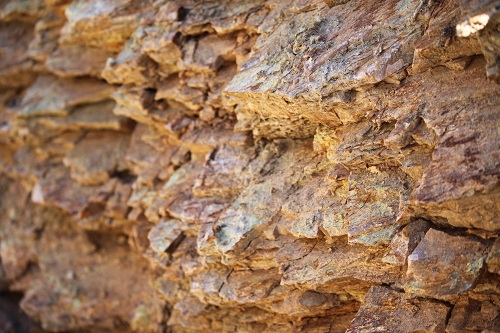 Towns sprung up across the state and businesses boomed. Until the price of gold fell and all those places were abandoned as quickly as they rose. 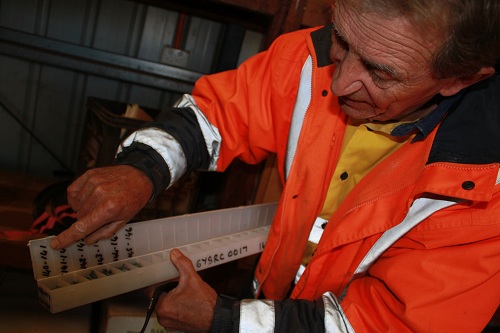 Youinme was once a town with more than 1000 inhabitants, 3 hotels a post-office and shops.

The mine re-opened and closed with the rise and fall of gold prices several times over the past century.

The latest shut down dates back to 1997 and all that is left is a pit full of water, rusty machinery and a camp in excellent condition thanks to David the caretaker. 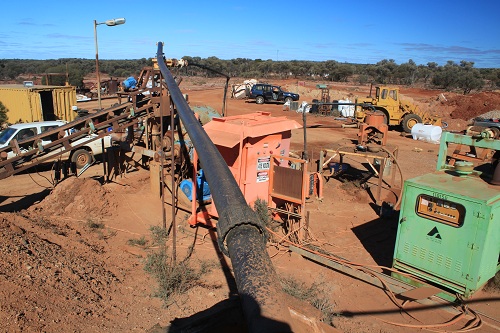 He showed me around and convinced me to stay to give my foot a rest and watch Holland play against Slovakia in the world cup. I didn’t need much convincing and spent a glorious day baking Anzac biscuits and changing plans.

Originally I had planned to go over Sandstone. So I could top up my supplies. But David showed me a cupboard full of everything you can imagine and told me I could help myself…

With enough food and sweets to last me a month I headed south instead. Towards Lake Ballard and Menzies.

I cycled a few days through scrub, cross small hills and over a huge Salt Lake till I got to a gate… It was closed and full of signs one of which saying ; “CATTLE ARE ERRATIC! 5 DEAD” I got the feeling someone didn’t like people crossing their land… 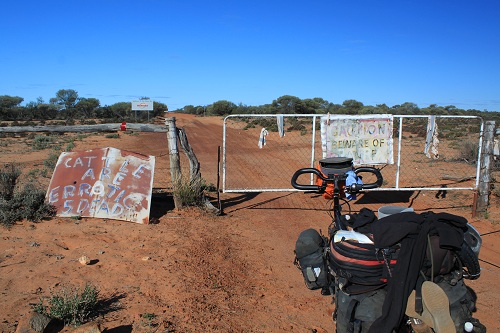 When I called in at the homestead I was greeted by an elderly scruffy looking man with a huge axe in his hands. It reminded me of scenes from ‘Wolf creek’ …

But this gentleman, Tony, turned out to be very welcoming and made me a cup of tea while chatting about days long gone.

He is alone, hundreds of km from anywhere. The station is run down and he really needs some help running the show. He came up with a plan to ask the government for a family of asylum seekers to come and live on the station. Just recently 90 families have moved into Leonora (the nearest city). But he hasn’t heard back from the government yet…

As I cycled away to go and find a spot to camp I noticed something moving in the bush. A dog. I’ve been warned by just about every person I talked to for the wild dogs in the area.

It followed me. Not helping much was the fact I’ve been listening to stories about werewolves and vampires on my ipod lately AND it was a full moon that night.

For about 15km it kept up. But I was gaining ground, till finally I didn’t see him in my mirror any more.

Tony had told me about another camp along the way. I had to look out for two big tyres. 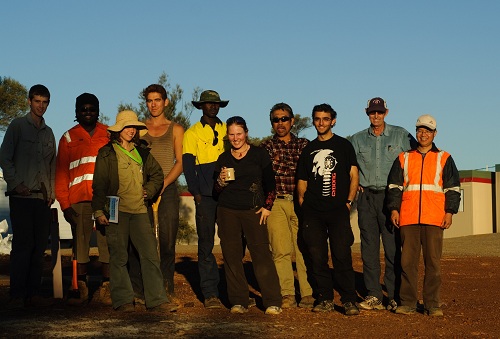 I found it. A camp where geologist stay while exploring the area for iron ore. Another worthy mineral found in WA grounds.

Personally I think mining camps are an excellent idea. Specially when those camps keep conveniently appearing along my route.

They had proper coffee!!! And hot showers!!!

With the promise to keep in touch I continued along the dirt roads towards Lake Ballard.

I’ve seen pictures of this lake. But never realised where exactly it was located. Until it was pointed out that it’s only 50km out of my way. I decided to check it out. 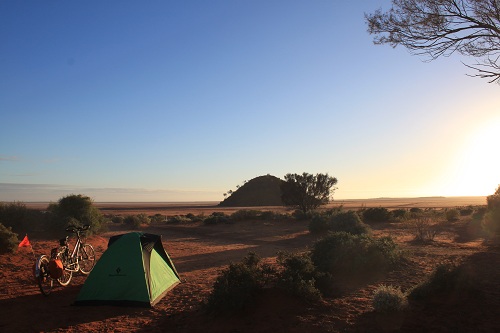 British artist Antony Gormley made 51 statues for the 50th anniversary of the Perth art festival in 2003 and placed them on a 10square km part of the lake.

I wandered between them early in the morning and marvelled at the surreal sight of the sunrise over the lake with the statues standing well…. still, as statues do.

The nearest city being Kalgoorlie at 300km. People that come out to see this, must really want to see it.

I thought the 50 km to Menzies wouldn’t take me long. There I was wrong again. The wind decided I needed some poper exercise and tried to blow me right back where I had just come from.

A car pulled up and a surprised man stated that I am a girl. I knew this already of course, but to him it seemed unusual. He continued with insisting I needed new tyres. There is nothing wrong with my tyres and I tried to convince him of this. But he would have non of it and left me slightly startled with the promise to get me some new tyres and deliver them to Menzies the next day…

He found me at the camp site the next morning and not only did he get me tyres. He also had some spare tubes and repair kits. He continued with inviting me to come and see his goldmine…

Indeed, the gold fever hasn’t died out here, as I already realised when I heard that ALL the others at the camp site were prospectors. From all over the country they come to find their luck in the WA goldfields. And it’s not just idle hope as one lucky person showed me. A 3 ounce gold nugget had seen the light for the first time in millions of years just that very afternoon. Worth 5000 dollar! that is a lucky find indeed…

So off we went, to see the goldmine. It was ‘only’ a small one. But nonetheless fairly impressive. He asked if I was looking for work. And it would be some experience, working in a goldmine… But the prospect of spending much time with only him and one other guy in their messy camp out of network and reach from any one didn’t attract me much.

He left me back in Menzies where I walked into the pub. Straight away the pub owner asked me if I was looking for work…

Not really. And anyway. I do not want to work in a pub again. Been there, done that 😉

But no. He was looking for an extra hand for 5 days at Lake Giles…. The exploration camp I called in at a few days earlier! So I said Yes.

The job wasn’t for another 3 days so I decided to keep peddling towards Laverton, another 300km and the start of the Great Central road. A track also known as ‘the outback way’

I wanted to avoid the highway so started along a railway line. A bumpy sandy track where, without realising it, one of the bags came of my trailer! By the time I noticed I was 11km down the track, I didn’t know this at the time. But found out on the way back….

So the short stretch to Kookynie proved rather challenging. I arrived at dusk and went straight to the hotel to see if they’d show the match (Netherlands playing Brazil).

Sadly, hours before kick off I was in bed. Asleep. Knackered after a long day on sandy roads…

And happy to be comfortable… and warm!

Next morning, I was both well rested and excited to hear we made it to the final!

The stretch towards the Great Central Road seemed a little busier. I was covered in big clouds of dust most of the time until I reached the highway, where I had no choice but follow it for half a day before a chance to turn off again.

Here I had to watch out for road trains, who with deafening roar roll past. Got to be real careful not to loose my hat. Or my life.

One more bush camp, before I reached Laverton. I managed to pitch my tent right next to a big mine-site so the noise of huge dump-trucks kept me up half the night.

In the morning I called in at the camp for a coffee before heading to town.

I got to Laverton and now needed a way to get back to Menzies.

All about that in the next chapter.