After being a mum for two-and-a-half years now I can tell you a few things. 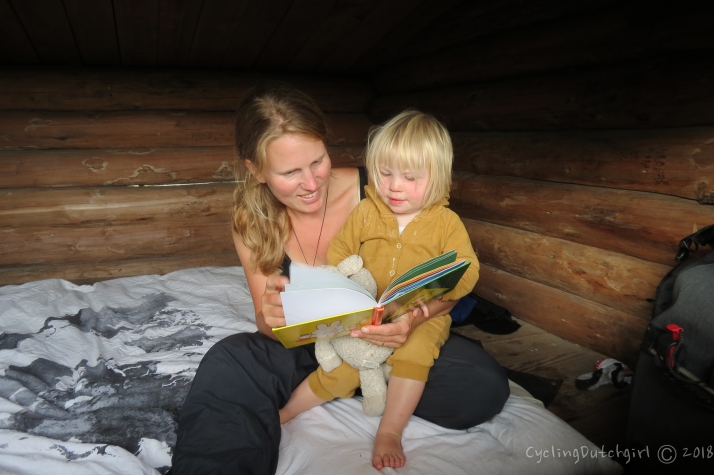 And the most important one of all.

6. Bike Touring with a toddler is super awesome! 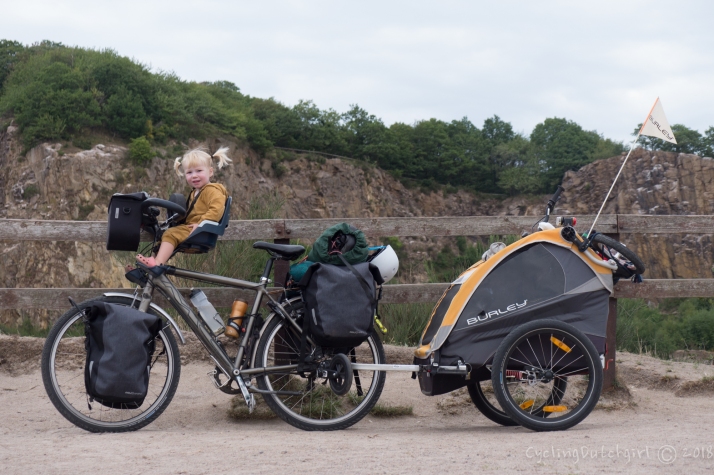 So that is where this story starts.

A country that I never felt particularly attracted too. I thought it would be to similar to the Netherlands. Too flat. Too expensive. And too ‘easy’… 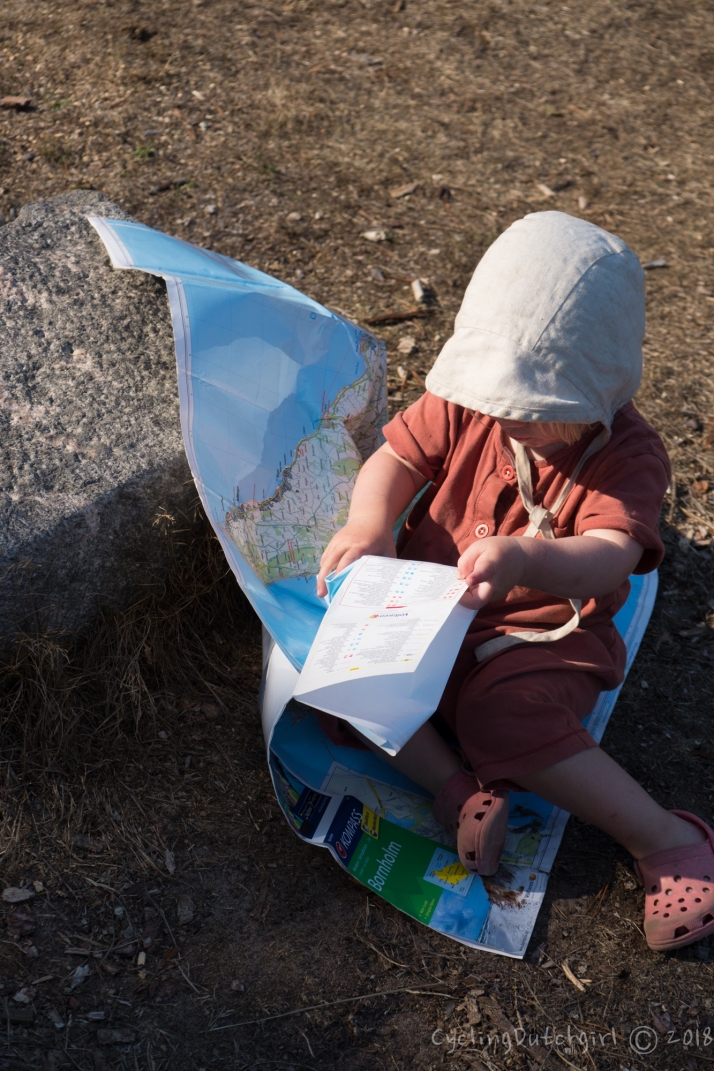 I couldn’t have been more wrong!

I had met another mum-with-a-one-year-old-who-likes-to-cycle in the past few months and she’d told me she has had very good memories of touring in Denmark. So we decided to team up and take a “vacation”.

Note: this is the first time this century I’m going on a “vacation” I guess the travels have spoiled me as I’m not used to having a date you actually need to return home and go back to work… so inconvenient!

Without unlimited time we needed to get where we wanted to go in a bit of a hurry, so we decided on driving a car to the German coast and take a ferry to the Danish Island of Bornholm.

What could possibly go wrong…

It didn’t take too long before discovering two toddlers would be great if they needed the same things at the same times. Sadly this was not the case so the decision was made to part ways and enjoy our own holidays to meet again on our return to the mainland.

This was an excellent decision and Tara and I had an awesome trip!

It’s the first time Tara is on her own bike too. 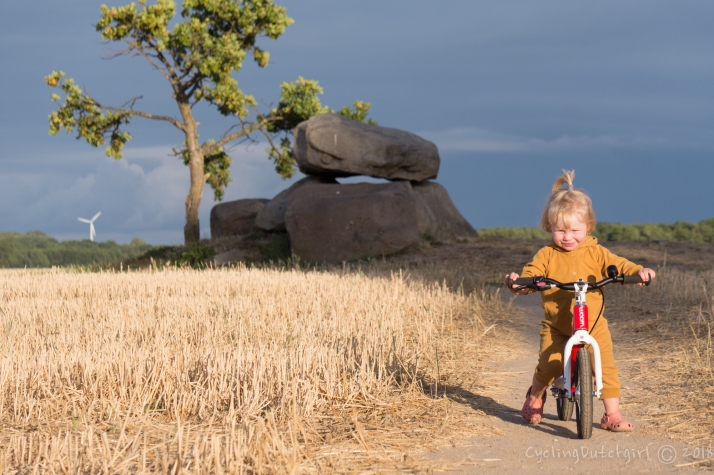 A few weeks before we left we had gotten the Woom1. With it’s 3,5kg it’s easy for me to carry and great for Tara to have her own transport when she didn’t want to ride on the front seat or the trailer. 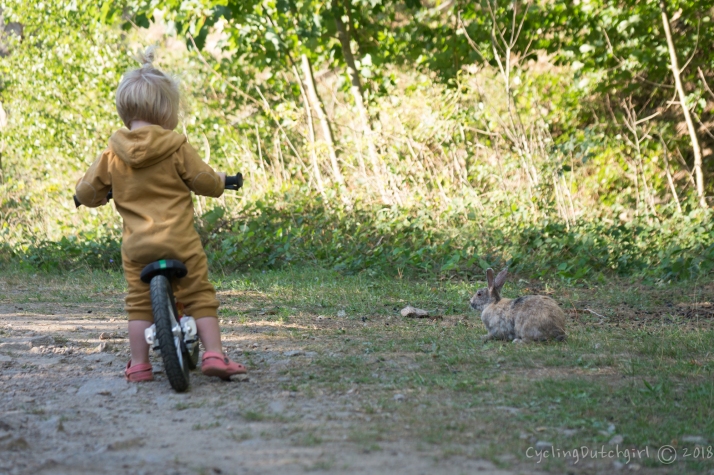 I do have to keep an eye on her though, she’s getting faster everyday.

At one point she rode off into the dunes and I was running behind her, just too slow to catch her when she speeded down a hill and into the scrub. She hasn’t learned how the brakes work yet.

And she seems to have no fear.

I got a much bigger fright then she did. She just laughed. And I’m afraid it’s a forebode of what’s to come (sometimes, really sometimes. I feel sorry for my parents now I have a daughter..)

So this Danish Island is located roughly between Sweden on the north and Poland on the south side.

It’s super idyllic with big cliffs and the ruins of a castle on the north side,

And beautiful, quiet, white sandy beaches in the South.

The sand there is so fine it has been used to fill hourglasses with. 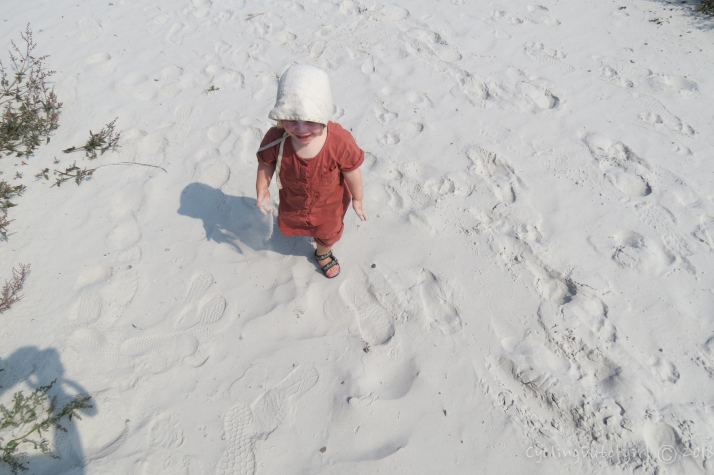 And then there’s a pretty forest and some hills right in the middle. 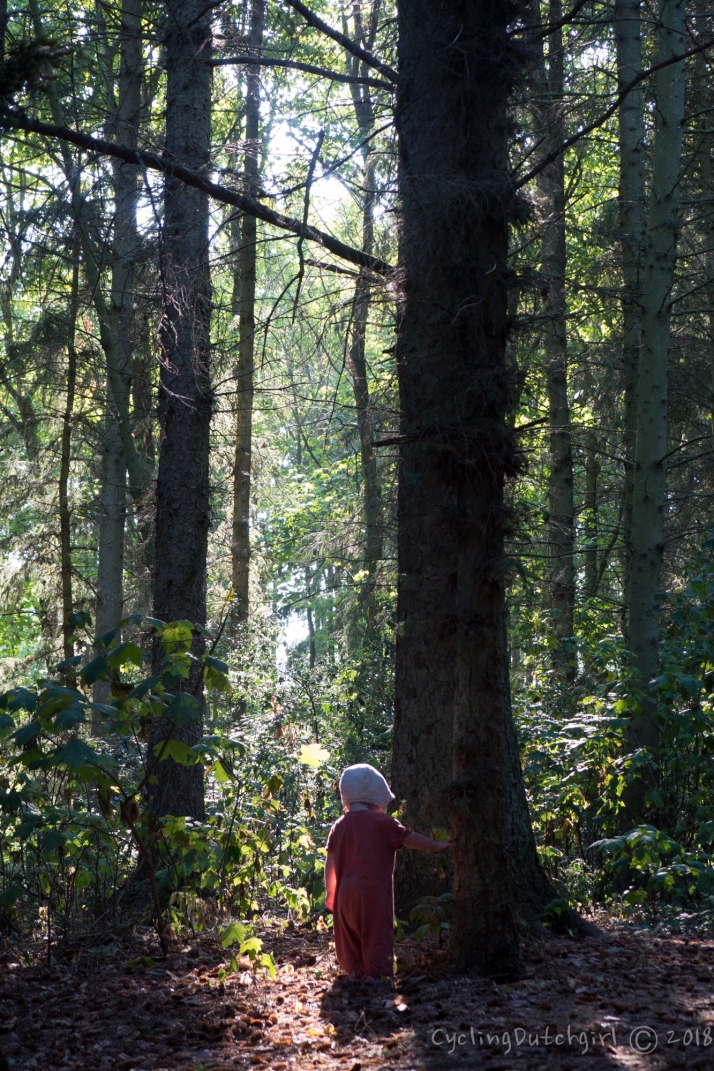 But the best thing about the island, and about Denmark in general, are the shelters and the free-camp spaces. Unlike other Scandinavian countries it is not legal to just camp anywhere. (the “allmensright”)

But unlike most of Europe you don’t necessarily need to visit a campground either.

There is this perfect in-between solution. 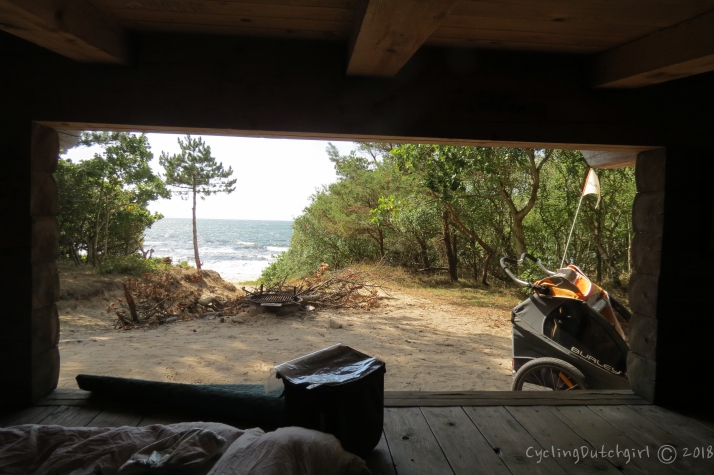 It means you don’t have to search for a good spot to camp and you don’t need to hide either. You just download the app, simply named “shelter”, and you can find all the places without a problem.

(as long as you have mobile phone service..) 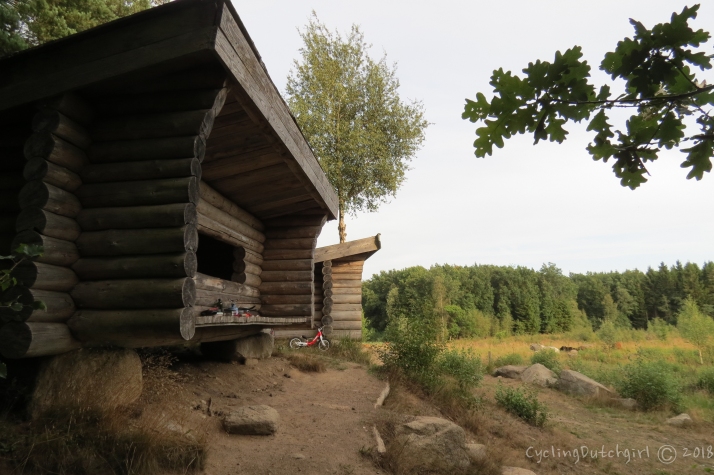 They are diverse and surprisingly quiet! 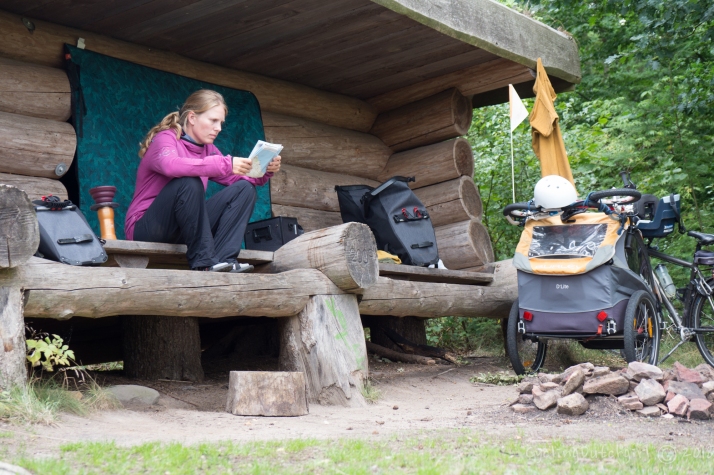 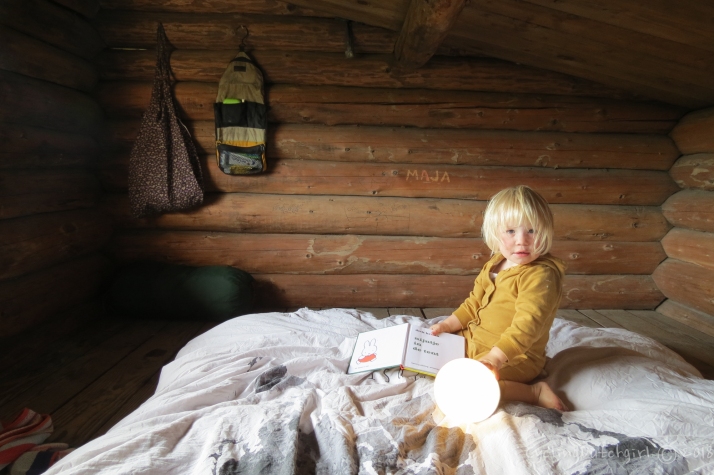 Only twice did we have company.

One time it was a big shelter near a larger town that I needed to visit for supplies and butterflies. A nice German family camped there with three kids.

And the 2nd time was slightly less pleasant.

Often these shelters are a bit out of the way and hard to reach.

This one at a gorgeous coastal spot was right near a through road.

And just after dinner when I was getting Tara ready for bed a crowd of 4 arrived and decided to have a party. including jumping on roofs and doing drugs.

In the past I probably wouldn’t have minded all too much. I might have even joined them. But now I’m not alone and I didn’t feel comfortable staying there with Tara, so I packed up, moved all the gear over across the road and up a hill where a nice lady let us camp under her apple tree.

The Cyclevej 10 takes you all around the Island, and as it’s a “kid-friendly-bicycle-island” I wasn’t expecting a killer 22% uphill on day one! 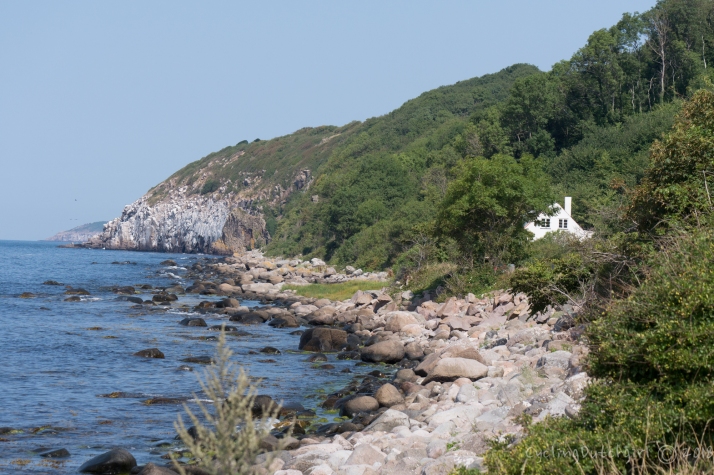 Impossible to even push up, so we took the trailers off and took turns pushing the bikes up, pushing the trailers up and looking after two kids. (I mentioned this was day one, we cycled together with the kids the first couple of days) 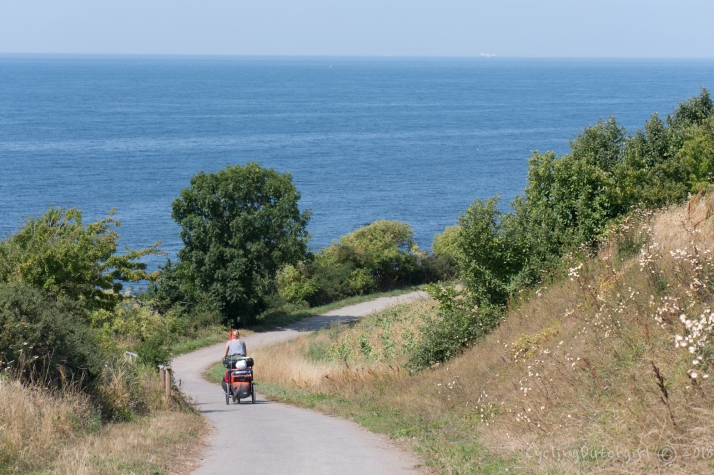 I was lucky to have Tara with me as she was very keen to get out of the trailer and help me “push” the bike, until I took this picture and realised her “pushing” is in fact not helping me a terrible lot.

But the cyclevej is just 140km, so it wasn’t long before Tara & I started veering off inland and backtracking and crossing our own paths as usual 😉

We came across these beautiful round churches. Or “Rundkirke” in Danish.

There are 7 of these medieval churches in the whole of Denmark and 4 of them on Bornholm. We happen to come across all 4 of them so took some time to explore. 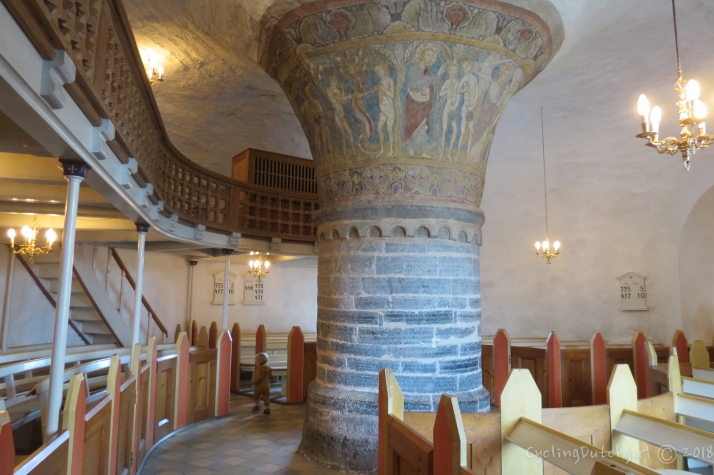 They are originally build around 1150. And they are a great place to have a picknick as there’s always a watertap nearby (usually in the cemetery)

Another pleasant surprise we got was the great choice of very nice foods!

And we even spent a day at a winery.

But most of all we enjoyed camping and playing outside. 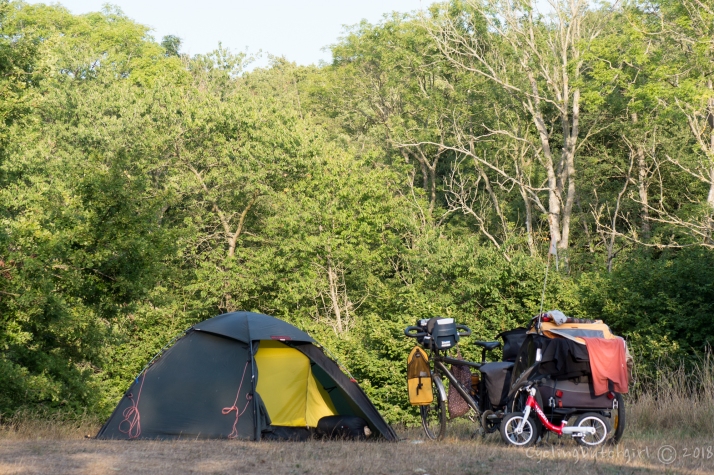 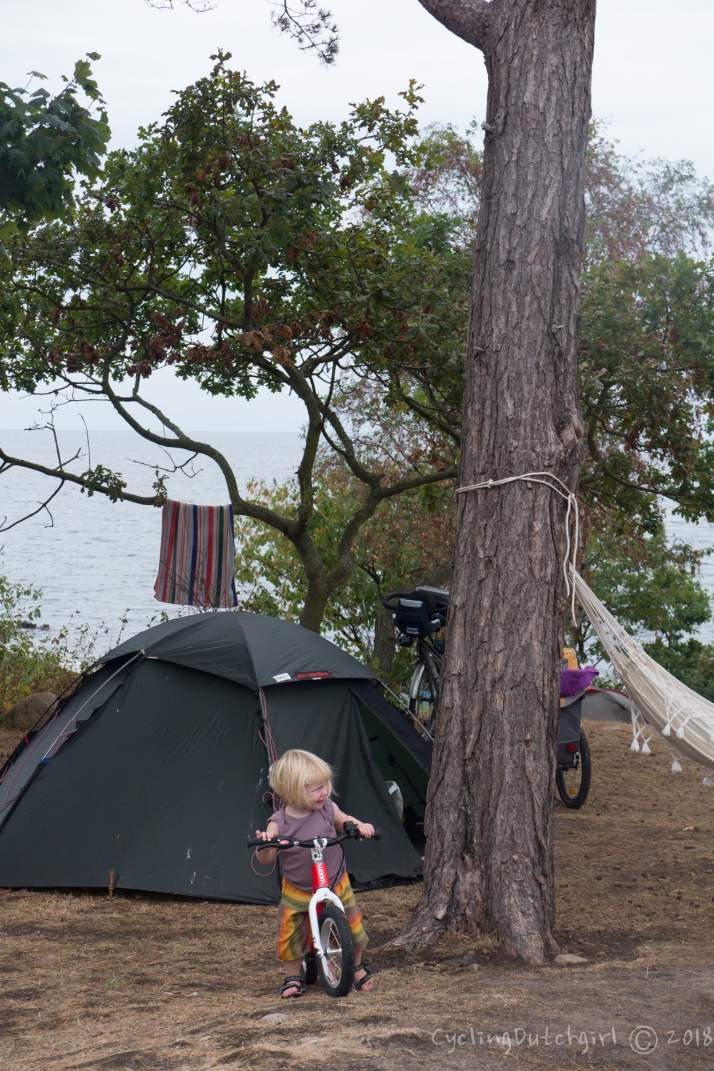 Most of the time the weather was really helpful as well 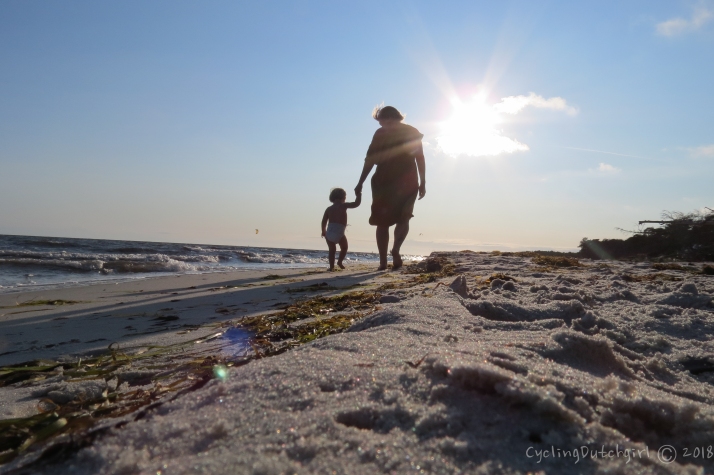 There were only a couple of days where we encountered some rain. 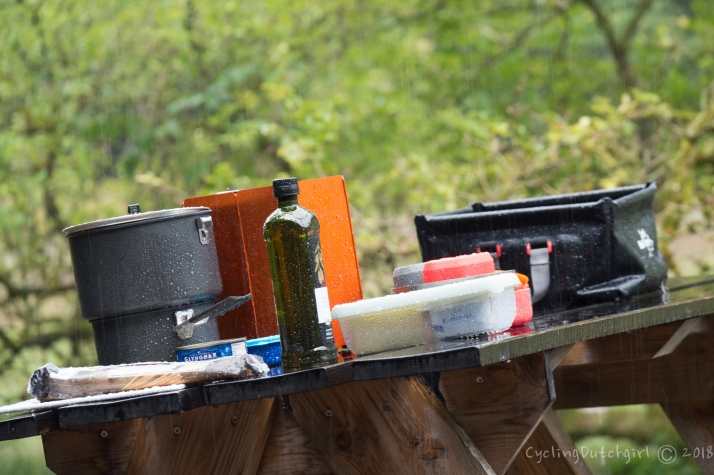 And even that was the best of fun!

It sure helped we had a great shelter that night. 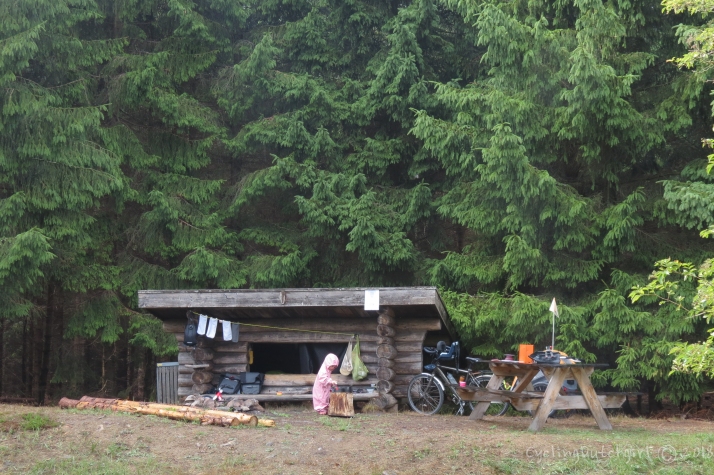 But, as for most of Northern Europe this summer, the weather was stunningly beautiful warm and sunny. 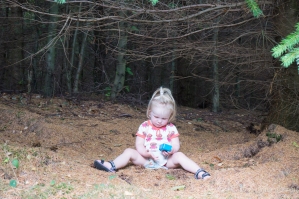 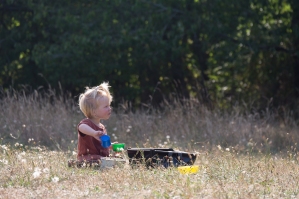 So perfect for a one-year-old to play outside!

I am not ashamed I dragged my full-size super heavy-duty hammock along.

Yes, I do have the light weight travel-version too. But this one (a thriftstore-score) is just SO much more comfortable to lay in.

And with the trailer I got lot’s of space to carry stuff… So why not?

So much to see, and so much to discover! 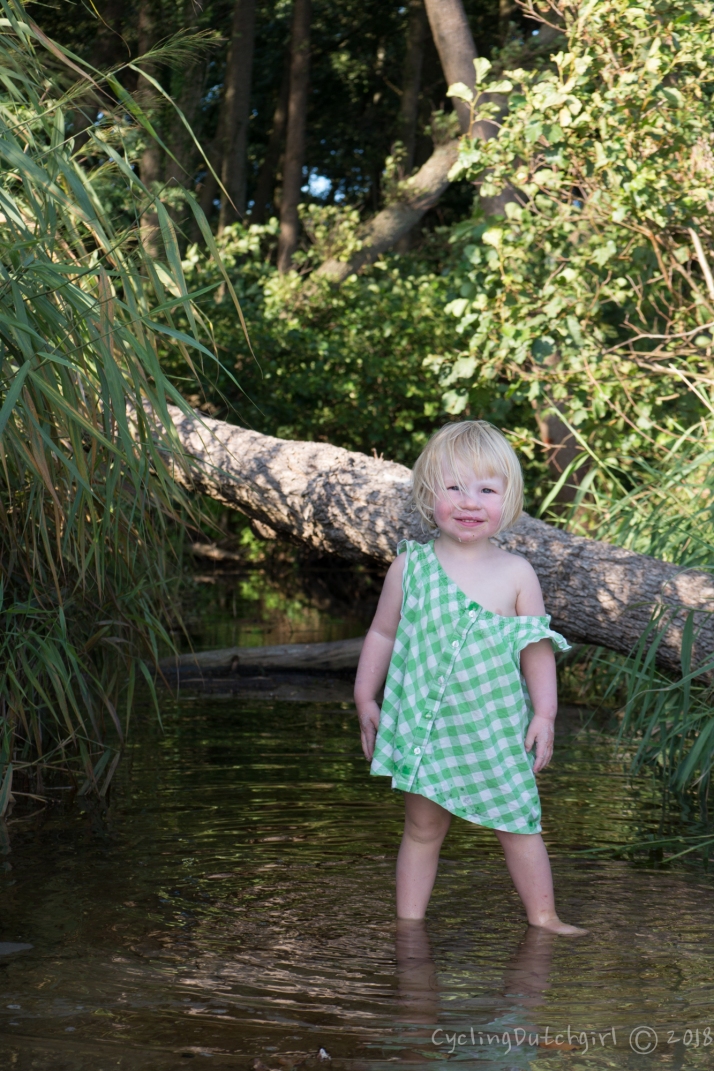 Even on one small Island in Europe…

What’s gonna be next…?

10 thoughts on “A Toddler on Tour”