I was thinking how funny it is I went to Iceland to ride the ring road in winter and allowed myself 3 months.

I’ve been in search of winter.

A cold clear wintery landscape is just stunning and magical.

And I want to see how far I can push my comfort zone.

Problem is the weather has just been pissy and wet for quite a while now.

And for some time I thought my little thermometer was broke as it kept stuck at around  0°C. In those conditions the road turns to slush and a mixture of wet snow and salt get’s splattered all over you.

Which really is no good for your hair. 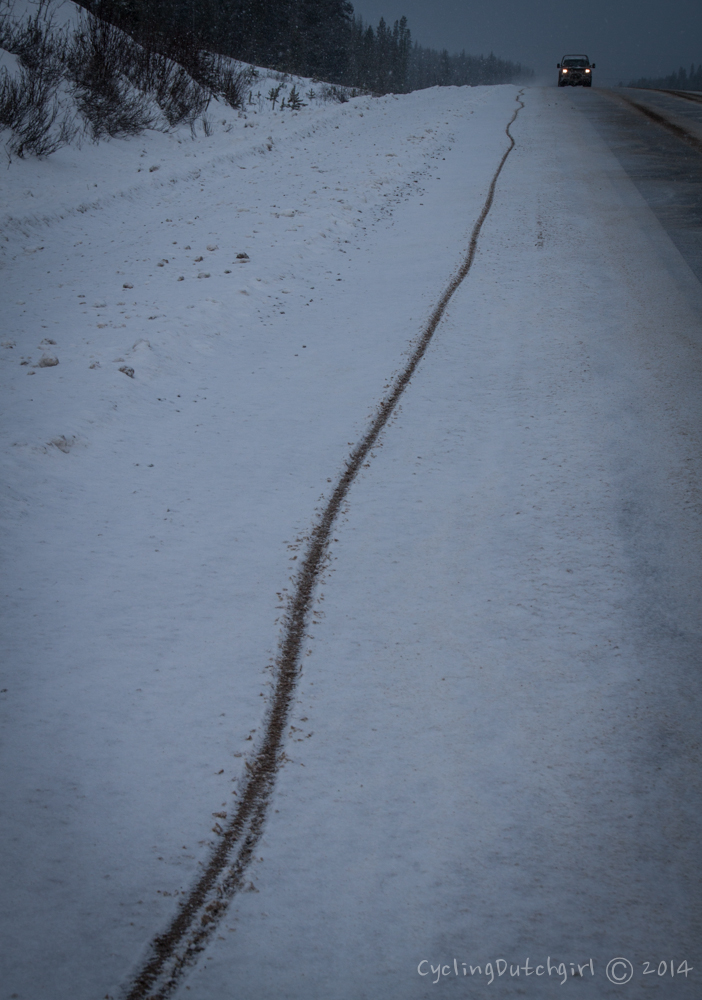 At the turnoff to Alaska I pulled over for a coffee and Monty happened to be there too.

He told me about his work and the sculptures he carves with his chain saws. I should really come over and have a look at them, he said.

So I wandered into the bush and he showed me some of his work which really is very impressive. He mentioned he’s heading to Germany this year to show off his skills and carved me a small eagle head that has been sitting in the back of my bike ever since. 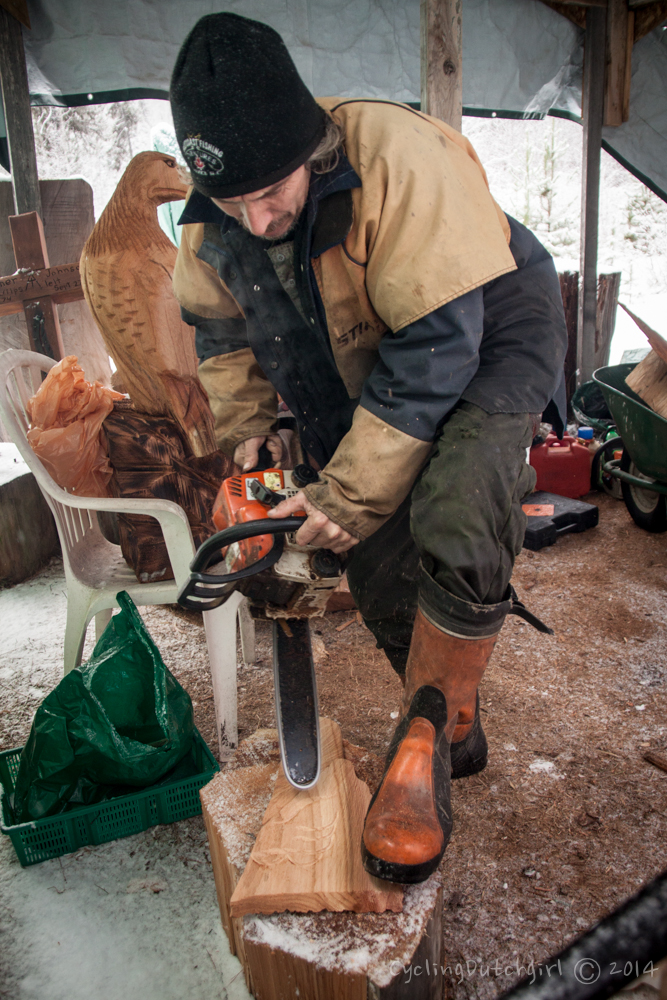 He then told me to go and see his mum in the next town. But I couldn’t find her.

Instead I got talking to the Pole-family who just happened to get ready to see their girls perform in the annual skate-show.

I haven’t seen that before. And it was a lovely performance and rather impressive. I loved skating when I was younger (still do I guess). But all them flips and jumps and twirls are a bit out of my range.

As the Pole’s lived in a gorgeous log home just out of the town I stayed warm and cosy and got up bright and early to head out of town in the direction of Smithers.

It has started to look slightly more wintery, the road was easy to ride and even my spikes didn’t slow me down too much.

Right in front of me a huge big beautiful wolf crossed the Highway! I’ve never seen a wolf before and was mightily impressed and happy I wasn’t wearing my red-riding-hood. (But the pink one instead)

A minute later I saw two Moose. Another first.

It was about coffee-time when I rolled into Smithers.

And in a small restaurant I got chatting to some friendly folk and was put on the phone with the major. He likes riding bicycles too.

When I left a lady had paid for my soup and a gentleman for my coffee. The hospitality and friendly people are really overwhelming at times.

Everybody was already in the Christmas spirit and I stayed a warm and cosy couple nights at Deirdre’s home.

She’s no stranger to bicycle touring. And racing. And running. And skiing. And skating etc.

Since it was winter solstice we’d decided to head out on the ice that night, with a borrowed pair of skates I enjoyed the clear skies and the mild temperatures.

I didn’t break anything (like bones or pride) ! And enjoyed coffee with Bailey’s and good company afterwards.

Even though the ride wasn’t all that challenging. This is ‘Hungry Hill’, 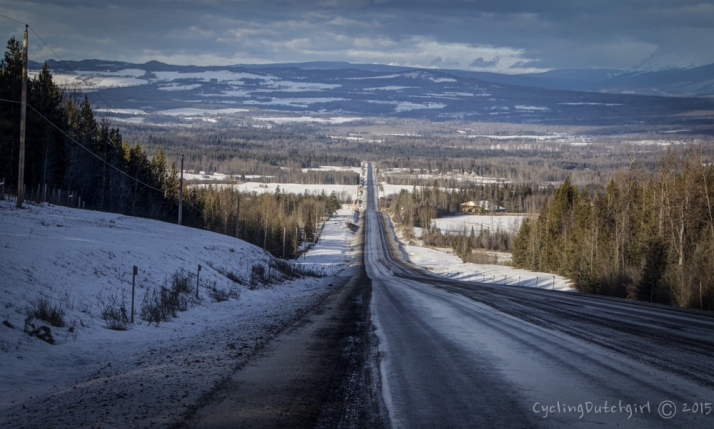 I cheated by eating before starting the climb, so I wasn’t hungry at all. HA!

I don’t think I ever spent this much distance following main highways, but this time of year it seems a sensible thing to do. And since I’m a sensible person this is what I did (…) 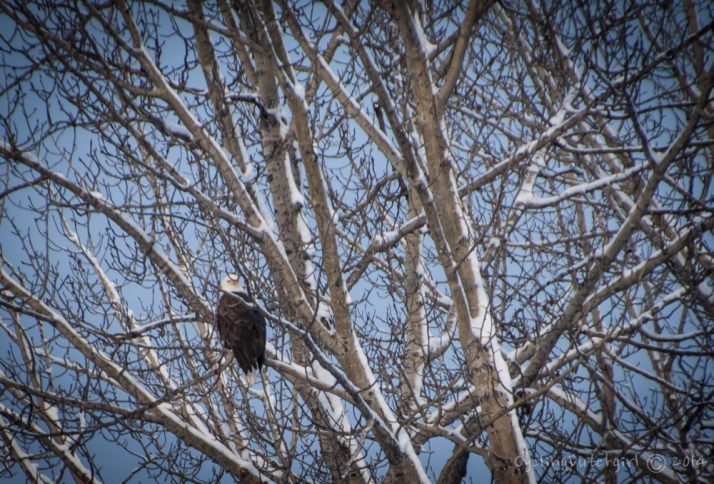 Next small settlement was Houston where Keith found me.

He is building a boat to sail around the world, but in preparation of that he works and hangs out with relatives over the Christmas holidays,

it seemed a great way to spent time so there I found myself smack bam in the middle of a wonderful dinner with heaps of brothers, sisters, nephews, nieces,

A jolly lot. And so very different from the next evening,

I pitched it on Burns Lake as it was nice and flat.

Better not too light the campfire on the lake.

It was a great little spot and the cracking of the ice was muffled by a fat layer of snow so that didn’t keep me up at all. 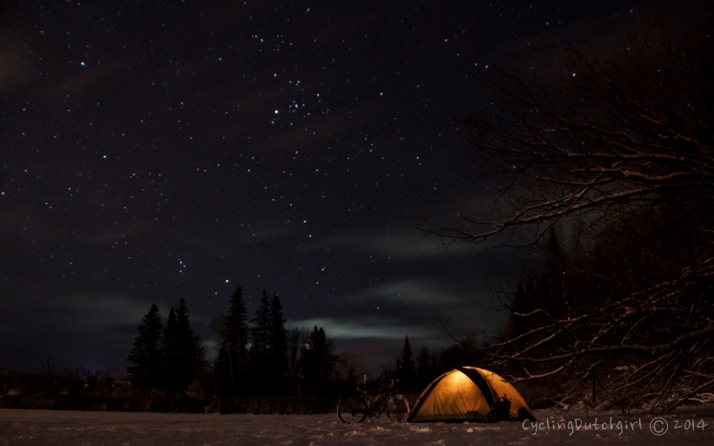 It was finally getting a little colder.

Now the slush froze and got stuck in my wheels.

Keith had rung a friend who owned the Endeka Hotel just up the road. They were closed for the Christmas holidays but opened up just for me!

By the time I arrived in Vanderhoof the temperature really started to drop.

As it happened my friend Deirdre was in town too.

This is me catching up with her and her friends who are all keen cycling folk!

Well, that confirms that then. And my thermometer started working too…

It’s funny to notice how many people try to convince me that’s crazy to be cycling here and now. I can think off a whole bunch of ladies who are cycling, or have been riding in much harsher and ridiculous conditions and are still not crazy,

But in a very good and inspirational way.

Jin, who’s just been riding all over Northern Russia and into Finland where she’s seen taken some superb Northern Lights photo’s! She Explains in her own wonderful way why she loves cycling in the winter.

Sarah  has just crossed Canada and dipped into the States (anybody asking for winter gear lists check her out) on her human-powered journey from London2London.

Emily, has just arrived in Alaska for the winter.

and Shane, (ok technically not a lady) spend a very harsh winter cycling in Canada last year. (also with tips and gear list)

The only worry I might have is other vehicles on the road. It’s still surprising that perfectly nice people get into a vehicle and turn into maniacs.

It’s not too bad though! Most drivers have been very courteous. But you only need one idiot… (as Jin tells us when she got hit in Russia)

There seemed to be a slightly higher density of maniacs around Prince George, but still nothing that would jeopardise my health.

There are road camera’s along BC’s highways, so you can check the road conditions.

I just happened to be pushing off the road when my friend Paul checked one of these camera’s… See here the result;

And here the place I was pushing towards, to pitch my tent for the night.

Nicely sheltered, a closed restaurant gave me a good place to camp. There was even a working powerpoint on the outside of the building!

One evening I saw a small gazebo and decided to ask if I could camp there.

I couldn’t because there was a whole big warm house with spare rooms and just two fellows living there. 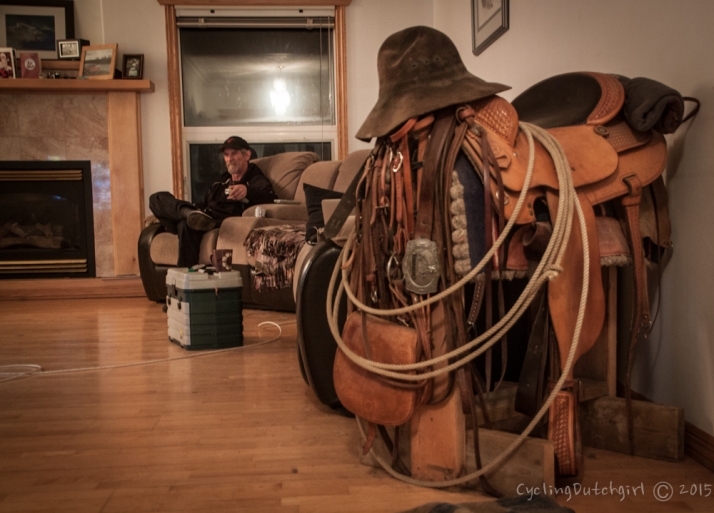 Not just that, they were about to cook up a huge Moose-steak dinner that tasted awesome!

After a good rest I was ready to hit the icy roads once again and a slight turn in the weather made it a sunny blue skied cold day. 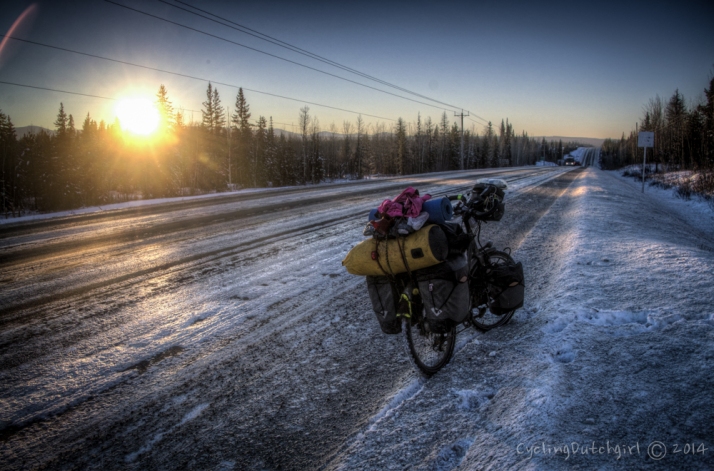 I discovered my boots are not actually that good at keeping my feet warm, but you can always jump up and down for a while to warm them up again.

Or find another cosy place to stay a night. 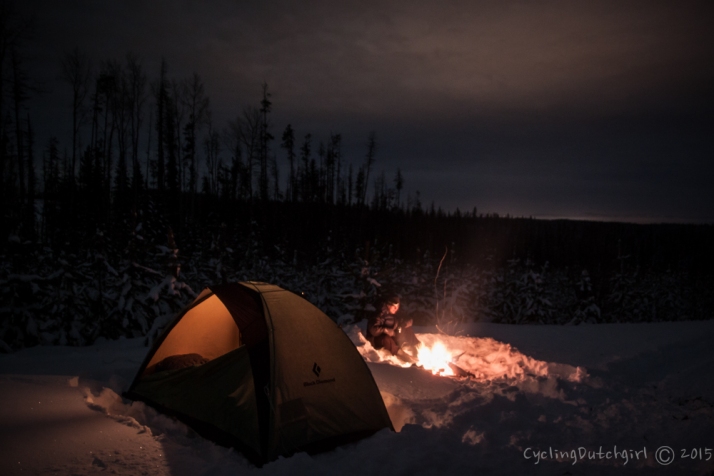 Hold on, I didn’t mean there… 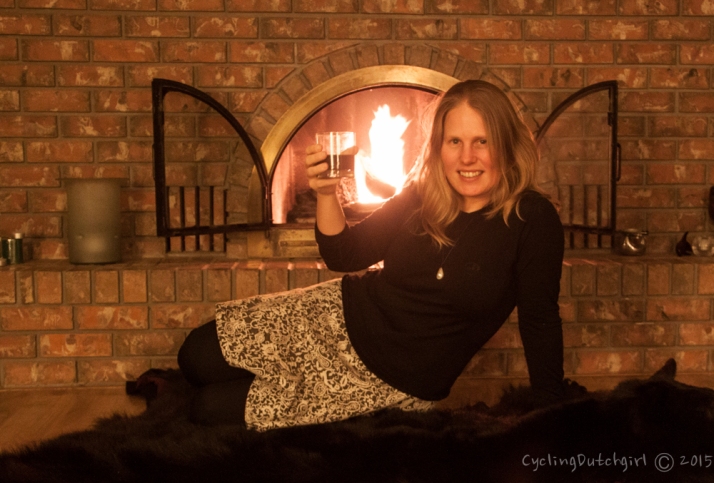 How more Cliché can you get then a glass of red wine on a bearskin-rug in front of the fire?

This is Jim’s place. Jim couldn’t believe I hadn’t had a Turkey dinner for Christmas yet.

So he fixed that issue. Never mind Christmas is a few days ago… 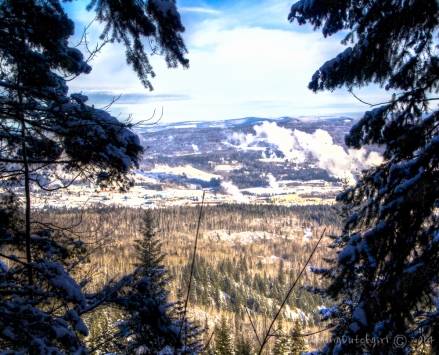 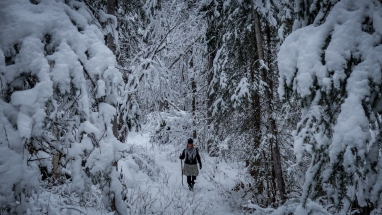 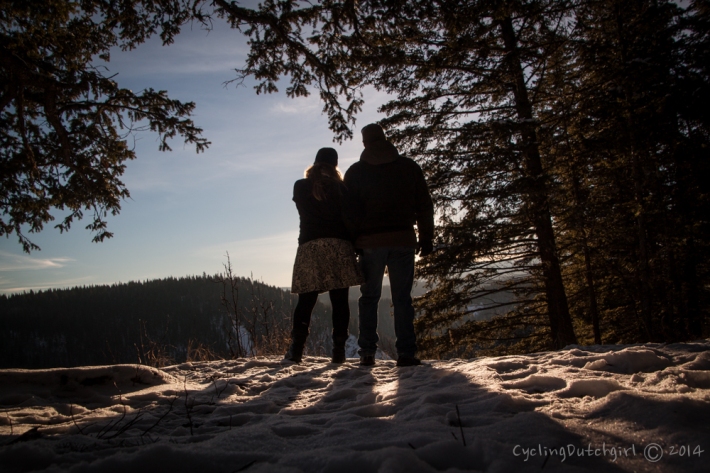 He made sure I’d seen enough of Quesnel to warrant me wanting to return one day. 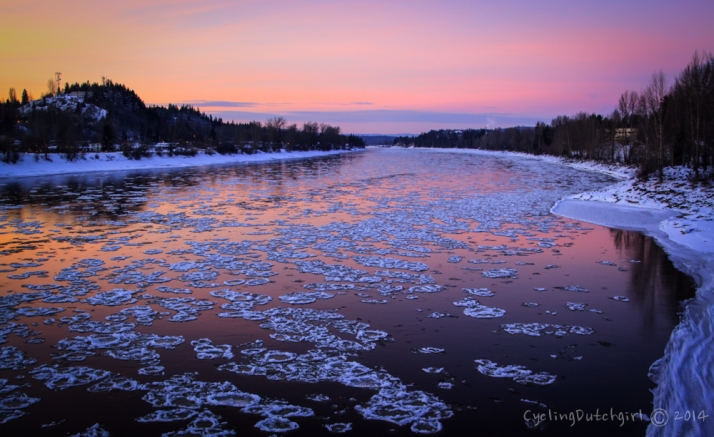 For now it’s time to keep moving along. 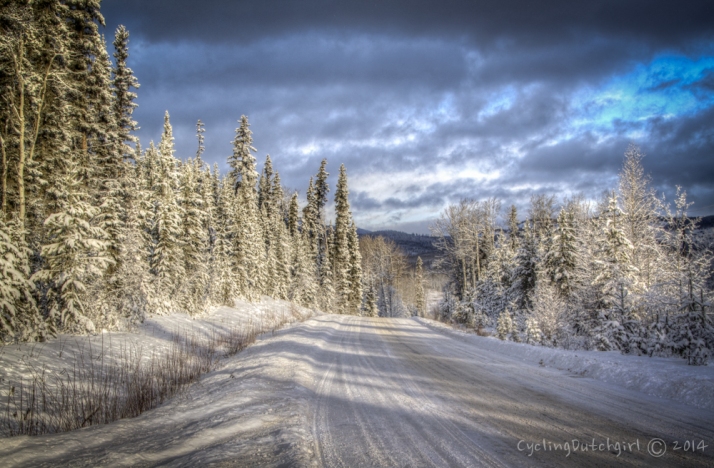 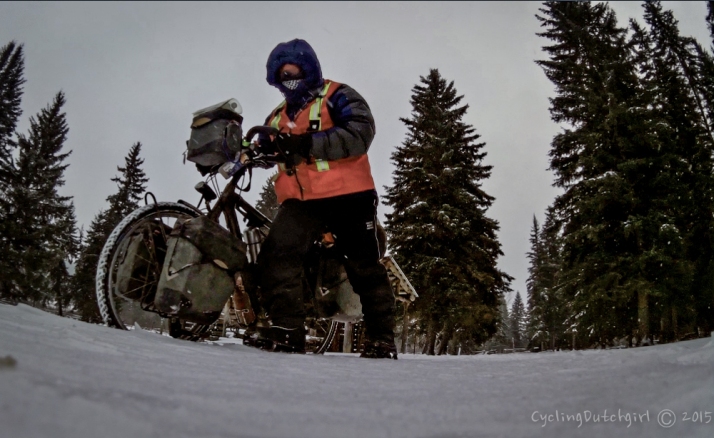 Back on the road and back into my tent.

This time I found an empty wood shed on the side of the highway were I was very well sheltered from the snow.

It had started falling and the forecast was storm for a few days coming.

With visibility non-existent and no sign of better weather I pulled over at a small restaurant in 150 Mile House were Terry just happened to be collecting his mail. 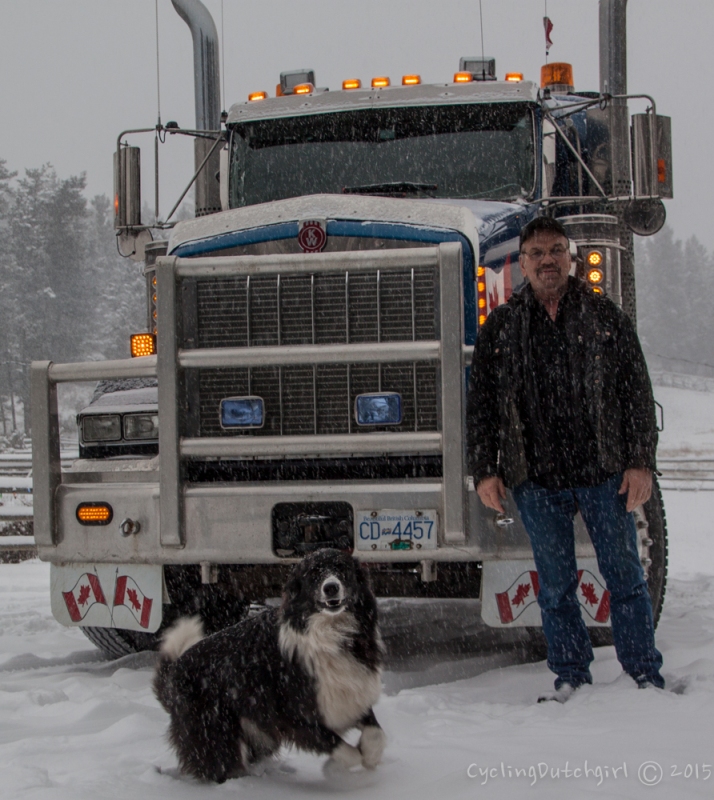 He lived only three km down the road and invited me to spent the storm at his place.

Together with dog Jake he has a comfortable home where I was happy to watch the snowfall, without riding in it.

Without riding my bike that is.

Terry drives a logging truck for a living, and Jake is always by his side.

I’ve seen many of those monsters along the way, people always warn me for the logging trucks, but in my experience they are some of the more courteous road users (and I’m not just saying that because I know one now) 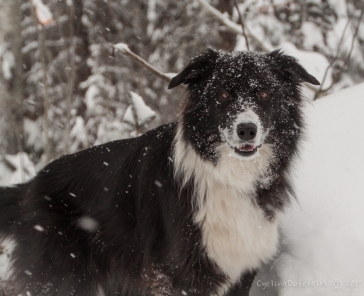 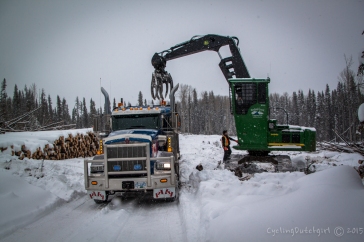 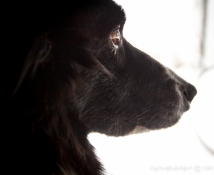 It’s interesting to see them from the other side of the fence for a change.

And later, days after I left, I still have trucks pulling over and checking on me, seeing if things are going well.

I was warned the road I intended to take was in a terrible condition.

But it’s been one of the nicest stretches of the trip so far. Sure it was icy in places and there was a bit of slush too. But on a bike you can pick your trail and finally being of the busy highways was just great!

And I met Barry & Lois, they were just fuelling up when I stopped for a coffee and invited me to stay in their house 20 minutes (drive) up the road.

And what hardship it was! 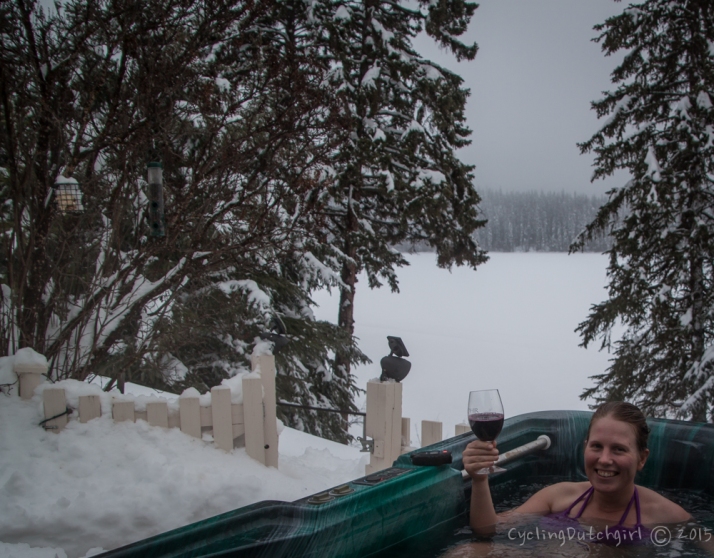 They live in the most gorgeous spot along the lake. 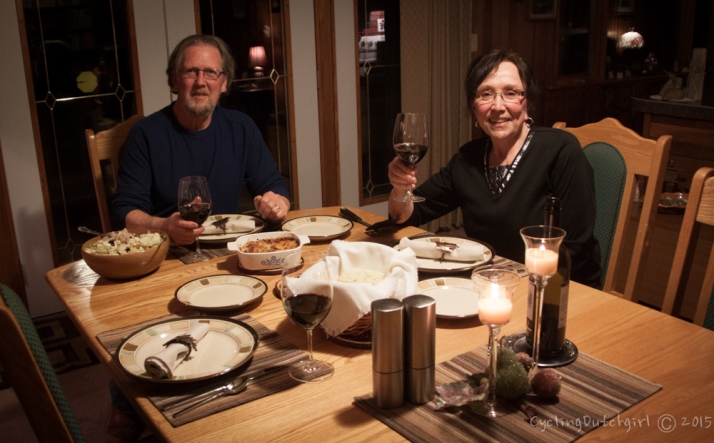 Having travelled all over the world themselves it was a wonderful evening.

Upon leaving Barry gave me a little Inukshuk.

These stone structures were used by the people’s of arctic regions to mark travel routes.

Now I won’t be getting lost in a hurry… 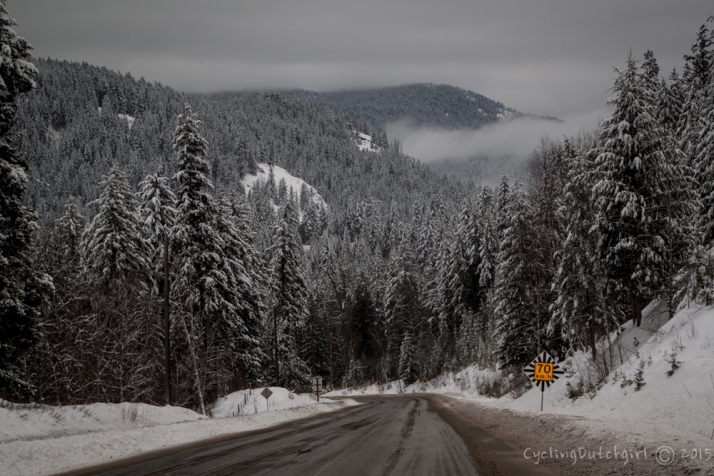 42 thoughts on “Winter is coming”