I rode out of Hafnarfjörður very slowly.

It had little to do with the load I was carrying or the spike-tyres I had still on.

I had half a day to enjoy the sunshine, passed a frozen lake with frozen waves,

and a boiling stream.

It’s weird having something hot, so close and being cold yourself. You either freeze or burn.

I turned left. Along the south coast. Against the WIND.

I didn’t have any other options, being on the far west of Iceland, I could only go east. So with a pace of about 5km/hour I struggled slowly along the track. It seemed endless. And finding some shelter to camp wasn’t easy in this barren land. I felt very fortunate not to be in a hurry as I figured I have about 800km ahead before I turn again…

I found a little spot along another frozen lake where the flapping of my tent kept me up most of the night.

I will have to do better next time.

But then farmer Snorri (56) came along and invited me over for a coffee.

Not such a bad spot after all.

Good to be out of the wind for a little while. After another cup, a life story and some cookies it was time to face the wind and move along.

One good thing is that every small village has a swimming pool. So there’s often the option to jump in the hot tub and warm up before heading out to try and find a place to camp.

But there aren’t always towns.

And there isn’t always shelter.

I have used the couch surfing website less than a handful of times since I joined 8 years ago. I find it to difficult to tell when I’m going to be where.

But I was lucky, Johanna found me along the road struggling against the wind with a knee that was about to give up.

She allowed me to recuperate at her family home for a couple of days.

And gave me a real good knee compression bandage that will stop me falling apart.

They live not far from one of Icelands most famous icons, 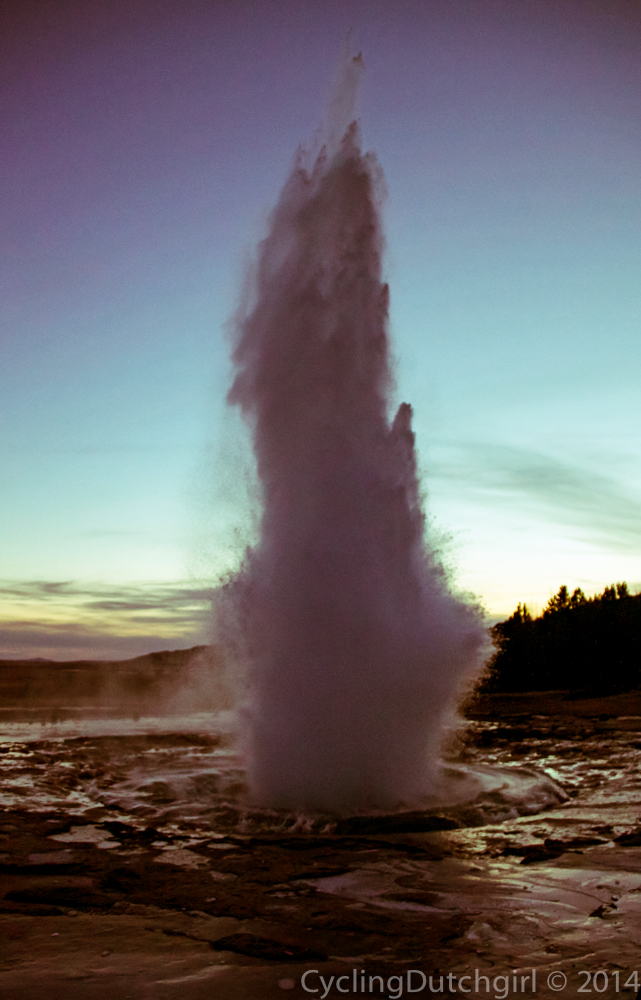 The one every other spouting hot spring has been named after, Geysir. Although in the picture you see Strokkur. Geysir is not active at the moment.

Johanna had some friends to drop off at the airport so I decided to come for a drive.

I should not have left my tripod behind. For this night I saw the most spectacular Aurora since my arrival in Iceland!

It was multicolored and completely psychedelic. So the trip that would normally take about 50min took us over two hours because we had to stop and gawk at the sky all the time.

Here is a photograph that Örvar, Simon’s close friend and amazing photographer, took this very evening.

A week earlier Örvar, his wife Mai, and Simon had taken me along on a small expedition to some of Iceland’s ice caves. 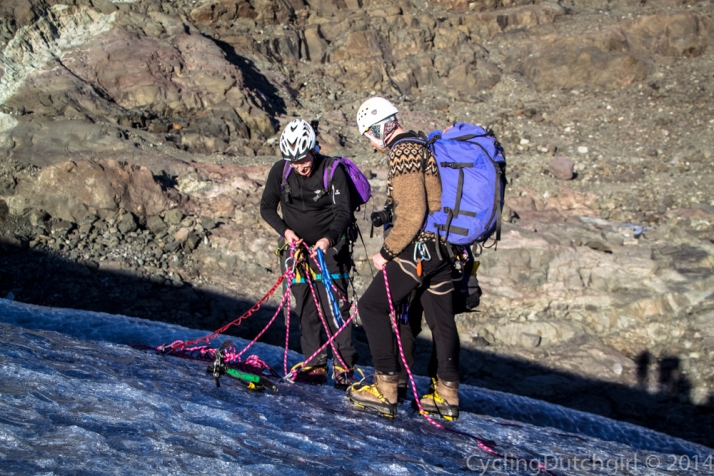 Both Simon and Örvar grew up roaming the mountains and wilderness of Iceland. They’re also both members of the Search & Rescue team.

I’m glad some one knew what we were doing.

Those caves are real pretty. 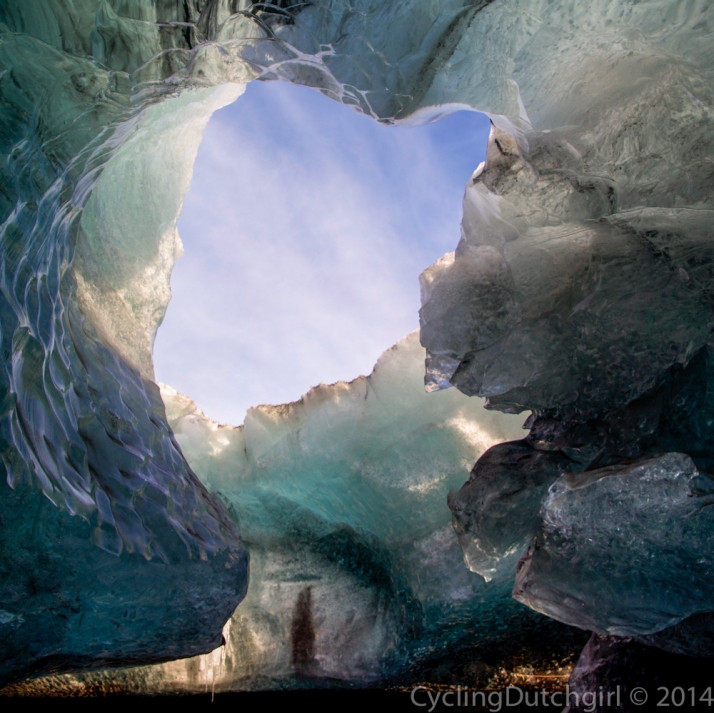 I hadn’t yet fully realised how lucky I’ve been with the weather.

After changing my tyres back around (no need for spikes on bitumen) it was a little easier peddling against the wind.

For about two days.

On a cold sunny afternoon I stopped at a community centre, it was closed so I couldn’t buy a coffee.

But a big choir from Reykjavik had their annual practise weekend here. So they gave me some coffee that I enjoyed while listening to their choir practice.

Back on the road I spotted one of those cute little churches.

As I stared at my map flapping in the wind two sisters pulled over. After a few questions and them deciding that I probably wasn’t some dangerous cycle-maniac they invited me to stay at the family farm.

It’s interesting to see how many conversations out here I spent at least 10 minutes trying to convince people that yes, I might be crazy…. But no, I’m not stupid (Well, I like to think so ) 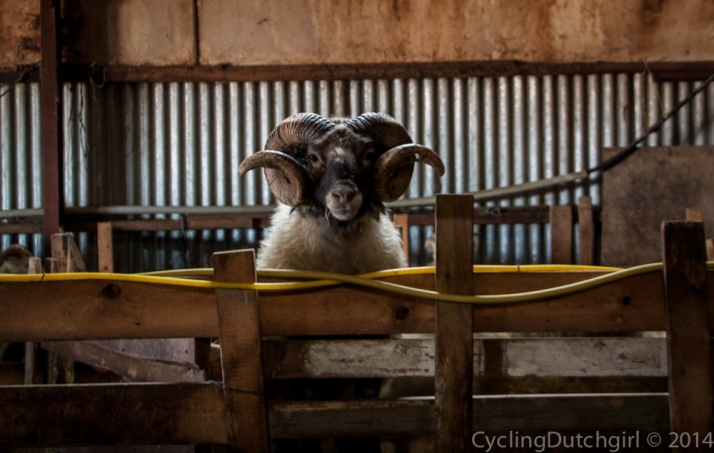 Their family has been here for many generations and now two sisters and two brothers still live on the property.

Small funny fact, I’ve noticed a few times now that potato’s aren’t skinned before, but after boiling. I had not seen that before.

On the farm in Stórinúpur they have horses, sheep and cows.

No hands are needed milking as it’s all robots these days. 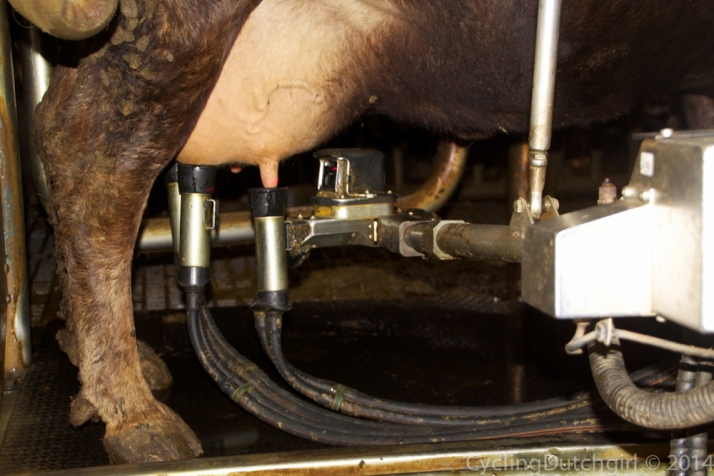 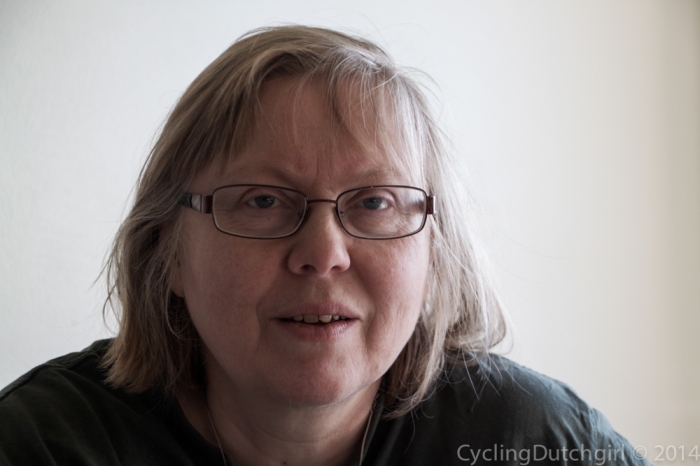 Her son studies in Reykjavik so I was allowed to sleep in his bedroom.

Not to have headwinds all the time I zigged-zagged a little bit.

Only one stretch before I could turn around this mountain, cross a river, and head back towards the coast.

Behind the mountain I had to walk with my bike, that’s how strongly the wind wanted to push me over. 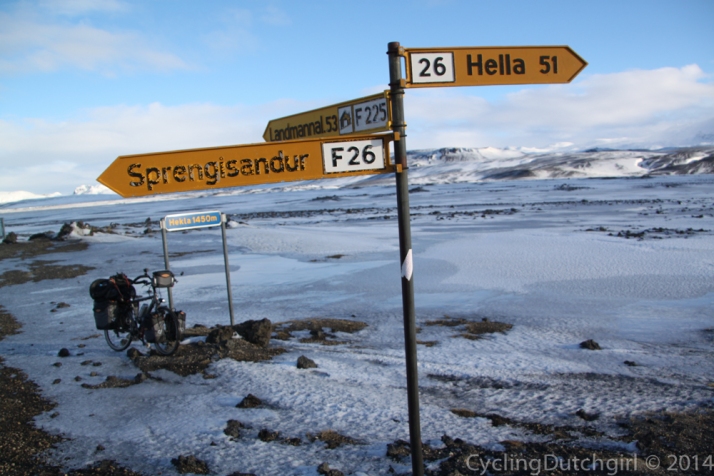 It didn’t succeed, although not long after I was flat on my ass anyway. Not the wind though!

When I finally turned around the back of that mountain I was happy to have, at least for now,  gale force wind from behind.

So I flew down the road that turned a little icy, just if I wondered if it was such a smart move to switch the tyres I felt my bike slide from underneath me and we both slipslided down the road for at least another 50 meters.

I thought as I was lying on my back going over my body parts to see if they’re all still there.

Nothing damaged except my pride.

Lucky I never had such a fall on tarmac… won’t be much sliding then.

I picked up and, very carefully, continued along my way.

At a scenic spot a huge 4WD pulled up to check if all was ok.

After reassuring I was fine he was on his merry way.

20 minutes later I saw him standing on the side of the road. So I pulled up to check if he was ok.

A flat on his trailer, my spare tyre wouldn’t fit so he decided to leave it behind.

This place, along a little stream, was perfect for camping were it not for the wind.

When I mentioned this he told me I could sleep in the trailer.

But he warned me not to close the door as they’re impossible to open from the inside and the thing is airtight.

Weeks ago a gentleman at the airport told me he knew a Dutch lady who lives here. Iceland is a very small place and when I got close to the town I asked a girl on a horse if she happen to know this lady.

It was her mum.

For the past 30 years Marieke has lived in Iceland. It all started with a love for horses.

Now there’s over 30 horses and her daughter, Hakla, showed me around the place. 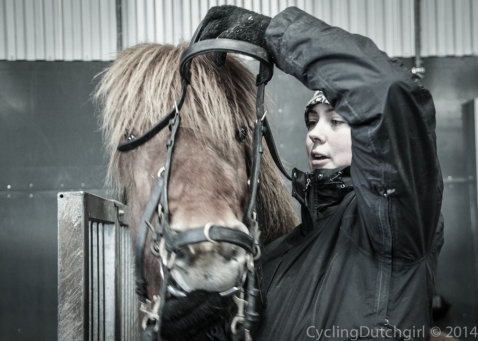 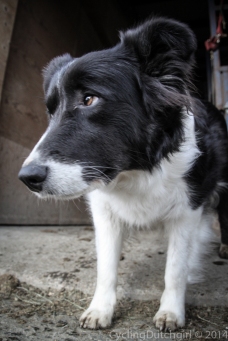 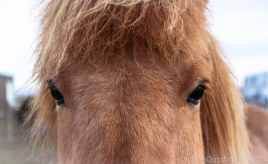 Icelandic people really like their horses, not just in the paddock. Also on their plate. I tried Icelandic-horse-steak and can tell you it’s delicious! 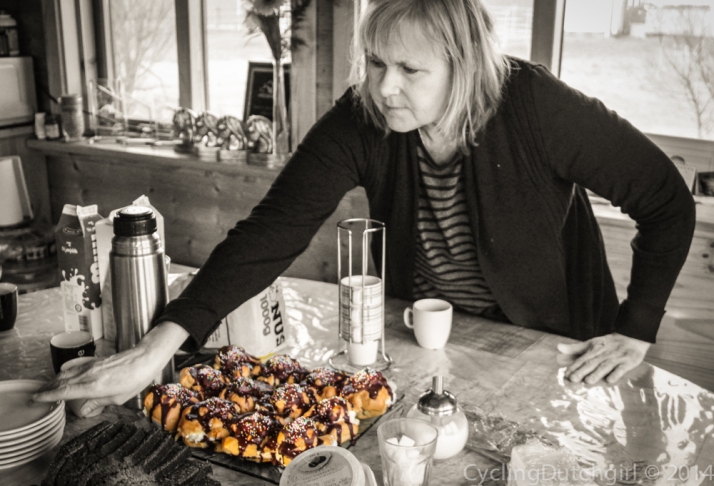 Bolladagur is a Lenten festival, a tradition that came to Iceland in the 19th century with Danish and Norwegian bakers.  Apparently about 4million are sold this day. Pretty impressive for only 320.000 people!

And this one day I happened to be here. Luck or what??

When I pitched my tent behind the hay bales that evening it looked like this.

But the whole world was snow-white when I woke up the next morning.

Just a day later I stumbled across another Icelandic celebration.

Anton and Sandra live with their young son in the small town of Hvolsvöllur. That happens to be smack bang on my route. They’re also Simon’s brother, and sister-in-law. And gave me a warm shower, comfortable bed and a place to dry my stuff.

Then invited me to enjoy an explosion-day dinner with the family!

I was told it was Sprengidagur, translated “Bursting day, or Explosion-day”.

The motto is to eat stew untill you burst. I really like that concept, and gave it a good try. 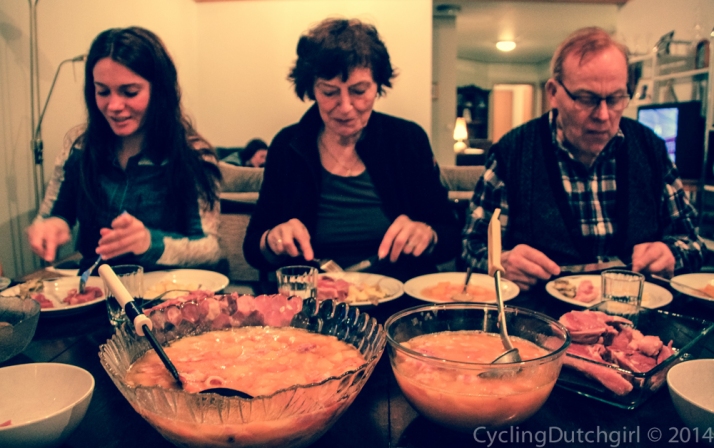 Every Icelander will be eating salted lamb or mutton and pea stew on this day. Bad day for sheep, good day for me.

There was some bad weather coming my way,

so I planned to stay put in a safe place for a few nights.

Someone mentioned this old pool, build into the site of eyjafjallajokull (I’ve been practising to pronounce that for weeks)

It’s the vulcano that caused havoc in air traffic when it exploded in 2010, spewing ash into the atmosphere.

The pool is build in 1923 and hot water comes from a natural spring and keeps it a very pleasant temperature.

There’s  a clear stream coming from the mountains so there was enough water to leisurely survive for a while.

The old changing rooms made for a great little shelter.

And made a cooking show

The one that doesn’t cook.

I wasn’t at all worried, but I was wondering how I would get back out to the road. 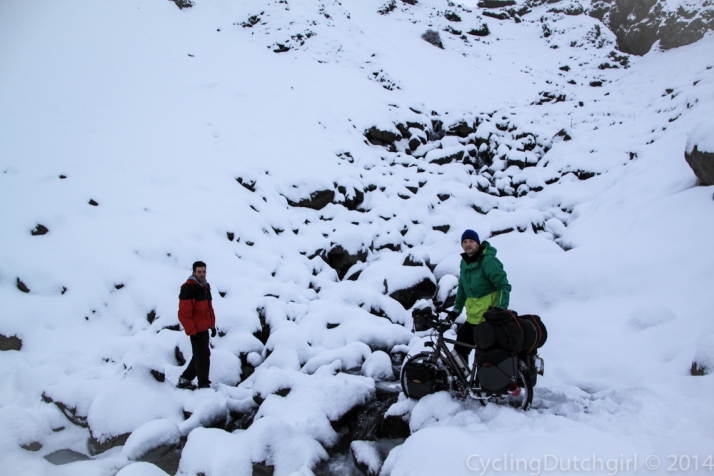 These Slovakian guys helped me across the dodgiest bits and shared their tea & cookies with me!

Back on the road it looked like it was going to be a glorious day.

Sunshine and not much wind.

But it didn’t take long for the dark clouds to roll back in and the wind to pick up.

A storm warning was in place.

When the wind picks up and snow is flying around, you don’t see much. 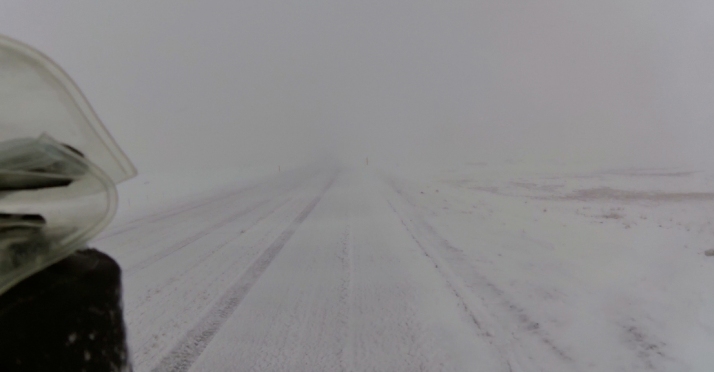 So I decided to play it safe. The idea was to find a farm and ask if they need an extra hand for a few days while the weather passes.

Instead I ended up at a pretty flash hotel.

With my own room, wifi, 3 meals a day and that all in exchange for just a few hours of my time! 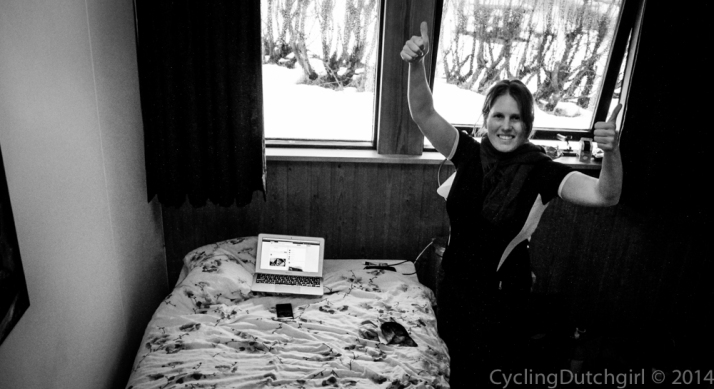 There’s worse places to be….

Like out there, where one unlucky guy had his tent blown to smithereens.

30 Search & Rescue-guys had to go and save him!

To the train station in my dad’s car

(well, actually, it was a holiday to Ireland)

Thanks for joining me!

28 thoughts on “Wheels, Wind and a Whiteout”