My arrival in Takayama was celebrated with a huge firework display. 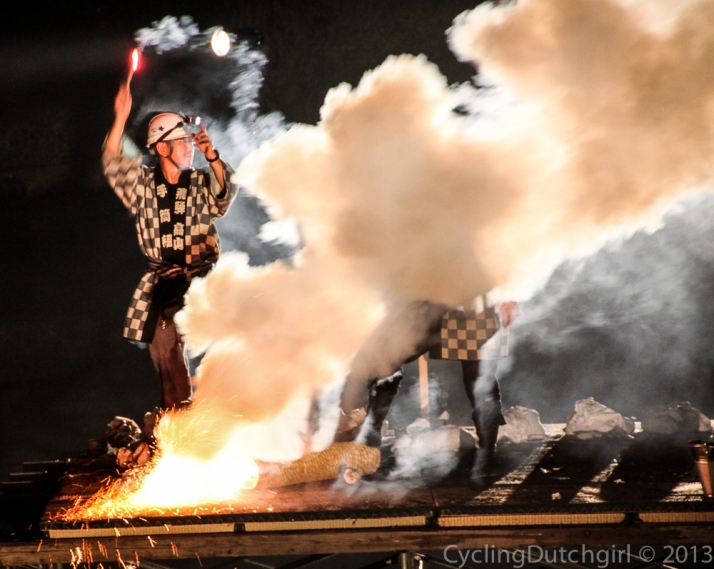 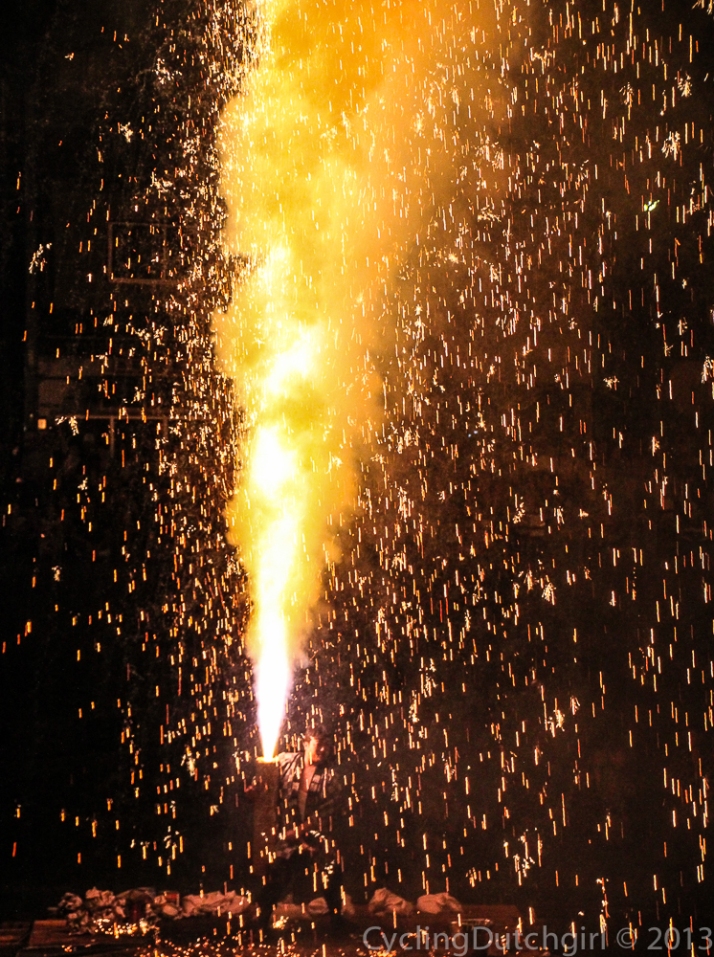 Different from your usual fireworks as the big fire spewing barrels were handheld by daredevils until they exploded. (the barrels, not the guys)

It started off with a few big bangs that would’ve damaged ears for miles around. Not mine though. My hearing has been damaged years ago as I used to have a tendency to visit heavy metal concerts…

I enjoyed the show with Jerome.  A French guy, who’s riding his bike around as well.

The temperatures have been going up lately so I decided to do another hill-stint.

A very nice quiet road winds its way out of town over the Odori pass. The road is quiet because it seems it’s not the only option. Massive highways overhead. 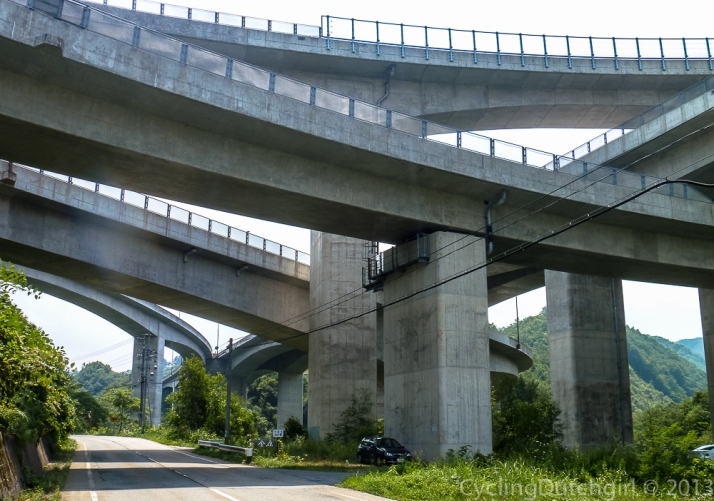 (or way down below, depending where you are)

The truck must’ve passed me before, but I first noticed him when I cycled past on my way up. A funny place for a break I thought as I smiled and waved.. A minute later he over-took me and the same thing happened twice more. At a rest area I stopped for lunch and saw him passing again. A minute later he’d turned around and parked right next to me.

The driver came over and seemed a little nervous. Trying to communicate without the language he ‘accidentally’ brushed up against me a few times while pretending to explain me my route.

Than he disappeared into his truck to come out about 15mins later, washed his hands, had a smoke and looked pretty satisfied.

He wandered over, this time to give me a cold drink and offer me a place in his truck if I liked. 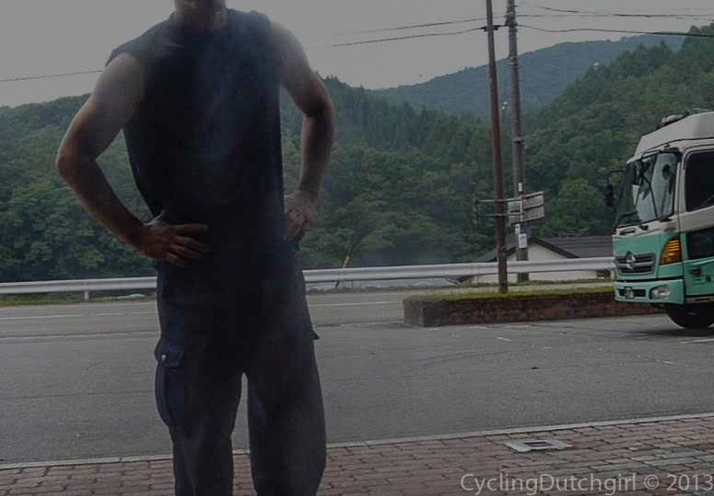 He passed me one more time on the road happily honking away.

I continued along mine.

Up here there is a lot of forest, 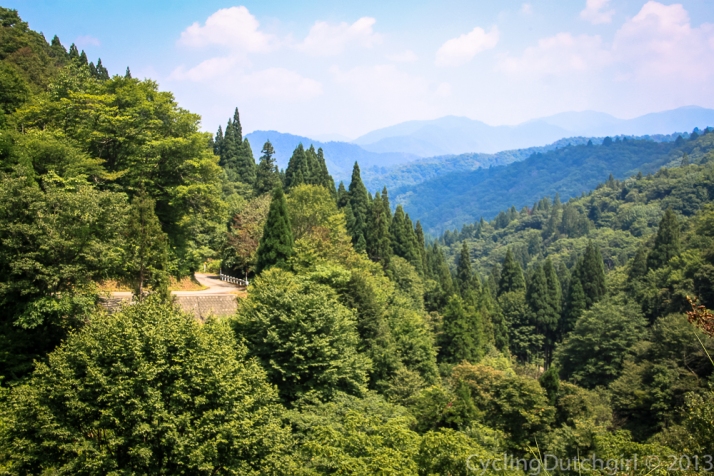 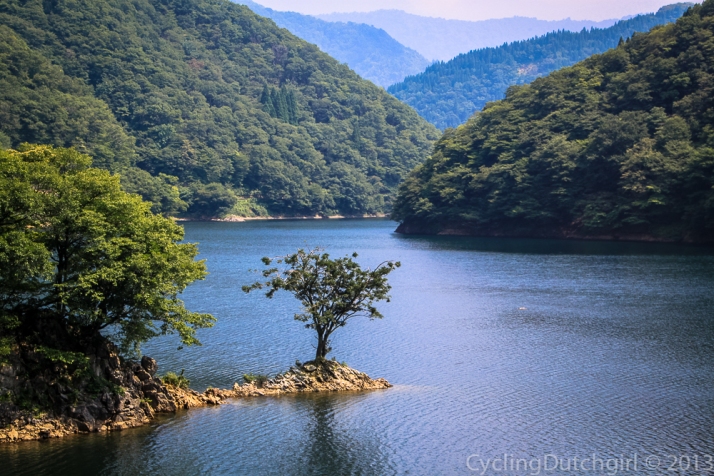 and a lot of very lovely cycling.

Not an awful lot else.

Or, as one man put it the other day: ”Why would you go there?, there’s nothing but scenery there!”

And I’ve seen other things too, 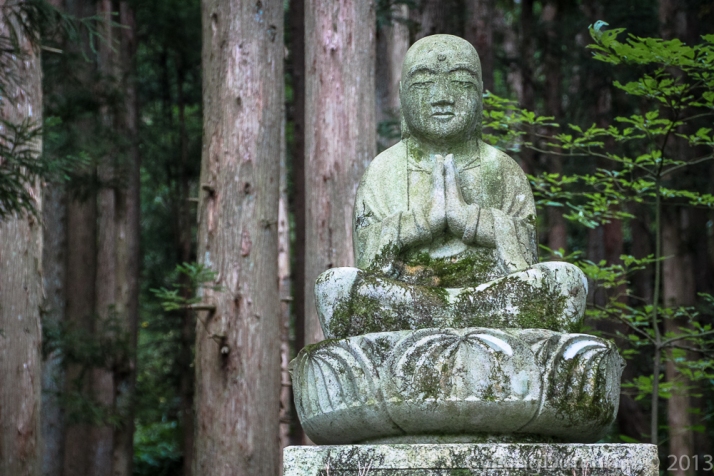 I took another turn-off on a small road.

It was a little bit of a climb.

It was getting dark long before I reached the pass. But lucky for me some road workers left their cabin open. With the key in the door!

It was sunday so nobody around. I had a wash in the river, filled up my bottles at the ‘tap’

and made myself comfortable.

I was glad I did because it took me another 3 hours the next day to get over that pass.

No traffic, it was glorious!

There are some wonderful roads in this part of the country, my favourites were the 230, 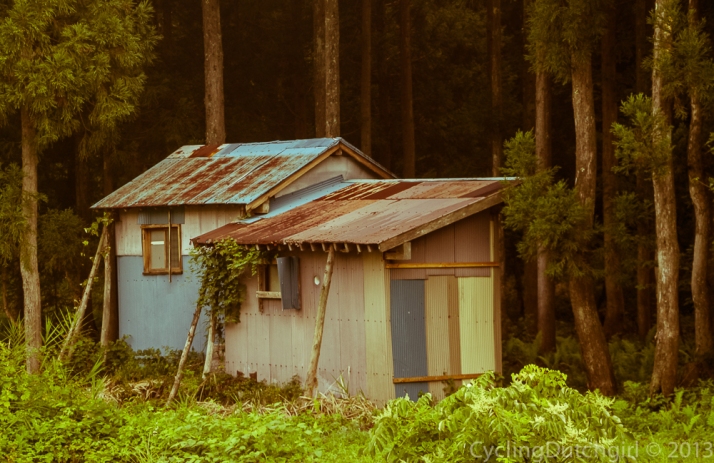 In case you care…

It has been warming up a bit. So I’ve tried camping as high as I can each night.

On my way down to a lake I noticed a very nice looking house.

The owner has build it himself and together with his wife he now runs a small restaurant.

They let me camp next to the house, and invited me over for dinner.

It was wonderful, it was also the last good sleep I had in my tent for a little while. But I didn’t know it then.

I shot down the mountains towards Japans largest lake.

Lake Biwa has a bicycle route all the way around it. I discovered when I hit the far north shore. So I rode along with a lot of very fast-looking riders who mostly do the 190km circuit in a day. I only needed to get to the south west. easy.

It was warm though. But I did manage to find a wonderful little camp spot right on the beach where I could jump from my tent right into the lake.

From my camp spot it was a little steep climb over the hills into Kyoto. Finding my road wasn’t so easy as most signs direct you towards the highway.

But this friendly man on a scooter accompanied me for 3 agonizingly slow km’s to make sure I was on the right track. He gave me an ice coffee too 🙂

Because Kyoto is known as the ancient capital I was expecting something like Takayama.

That’s what you get for doing no research.

Kyoto is a big city.

As in really really big! 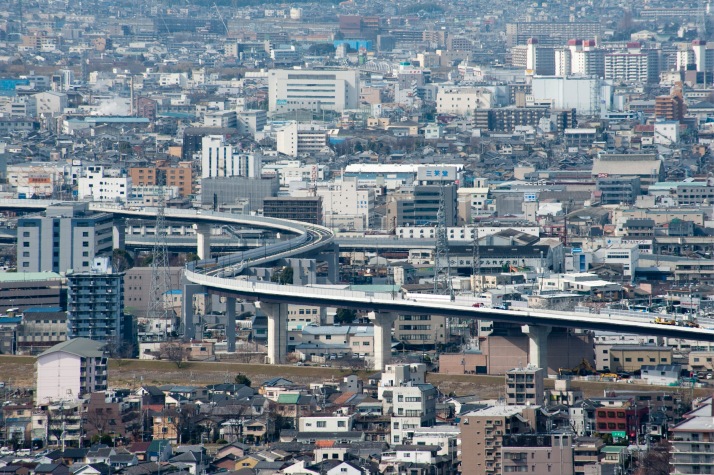 (this is not my pic, I tend to forget to take pics when I’m not very happy.. I found it here)

Trying to navigate my way through the traffic, the people and the heat I got a flat tyre.

Perfect place.  I sat on the road with all my stuff strewn around me fixing it.

Than I shot down the highway and got another flat! While fixing that a friendly fellow from a nearby shop came over to give me a cold drink. Very welcome indeed.

And this on the only day that I was in a little bit of a hurry and actually cycled to get some where instead of cycling for the cycling.

It makes a huge difference. In my world it does anyway.

After Kyoto there was just massive towns. Lot’s of businesses, restaurants, people and traffic.

I found a place to pitch my tent in a park but it being my first night at sea level it was unbearable in my tent.

The temperature never dropped under 30 over night and as soon as I opened the fly mozzies where mauling me. Having a ‘shower’ in the toilet blocks didn’t help.

As soon as I got out sweat was just pouring off me.

I did happily shout “ おはようございます” (that’s ‘good morning’ in Japanese) to all the people that passed my tent on their early morning work-outs. But they all ignored me. Can’t blame them really

I usually don’t stay in coastal area’s. I got a theory that people inland are very different from those along the seaside.
And I don’t like (salt) water.

But I had a good reason to ride along this busy coastal stretch.

A short message a little earlier notified me of some old mates being in the neighbourhood. But only for a few hours.

So I decided to ride to the port in Kobe and catch up with my friends from the NYK Galaxy.

For a few hours I was back ‘home’. (This is the ship I travelled on from Australia to New Zealand 5 months ago)

Great food, a shower and a chance to do my laundry while catching up with the Captain, 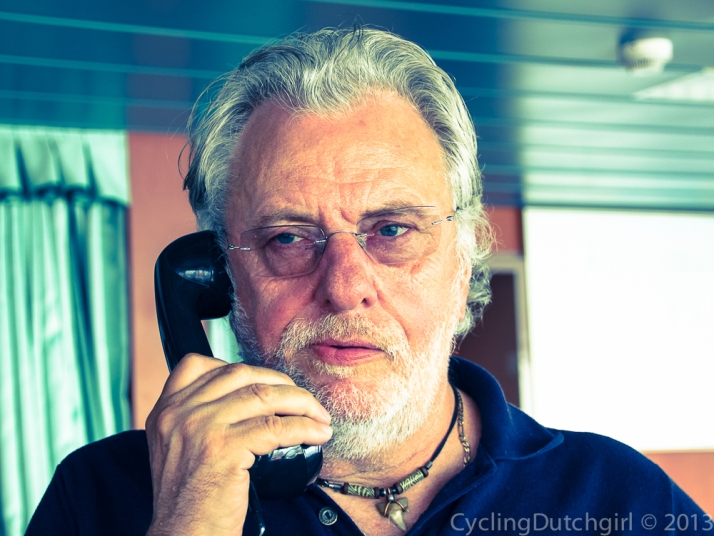 and Mates. In air-conditioned gloriousness. Nice coffee too!

And back into the heat.

Even though the road is pretty good and there are no hills. I still don’t go much faster than about 10km/h.

Every km has at least three red traffic lights. You are supposed to ride on the side walk but after banging up and down edges through bumps and cracks and trying to avoid pedestrians I decided riding on the road is better for everybody. Except maybe some cars who have to slow down before over taking. But they won’t let me know if they are annoyed, they’re too polite.

It might be getting serious when you’re not too embarrassed to walk around town in these;

Then again, it might not be too bad as some random guy came up and didn’t know a word of English, his French was pretty good though as he declared his love for me and disappeared again.

Just down the road was Susumi Miki’s hometown.

back then they told me ‘if you’re ever near Kobe…‘

And here I was. And there he was, waving and standing on the road surprised I had managed to locate the address.

I knew he was up in Hokkaido to collect bugs.

I didn’t know that longhorn beetles are his lifework, not just a passion.

He is not a butterfly collector, but a catcher. It’s a difference. He has more than 200 different kind of butterflies.

They have a wonderful apartment with a whole downstairs area, spare room for the bike, bathroom, kitchen and living/bedroom where they are happy to welcome travellers. As long as they’re nice. I hope I fell in that category. It was a short but wonderful visit.

A speciality in the family since his granddad took it back from Russia where he served in the war.

I was fed up with the traffic, the red lights the buildings and the heat.

I was not allowed to ride this bridge,

So I jumped on a ferry,

rode up a hill,

and set up camp in a spot that made me happy. 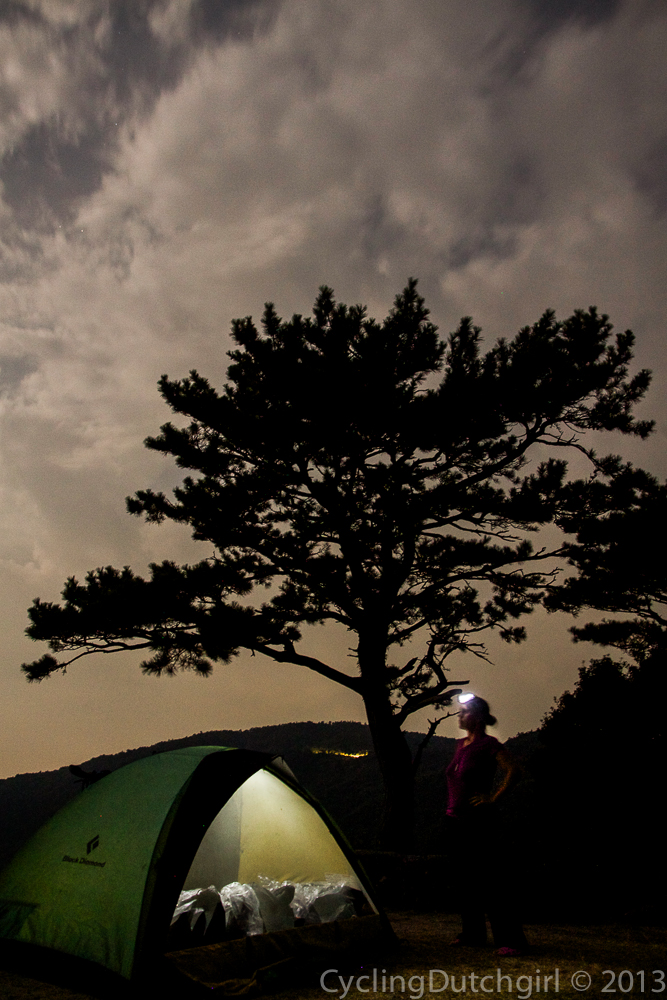 This is Shodoshima Island.

Famous for it’s olives, but I never found out untill after I left.

For me it’s famous for it’s steep roads!

I burned my hands on my rim when I tried fixing yet another flat tyre. Hot from the brakes.  The fact it was 37 degrees probably didn’t help.

I think the glue and the temperature don’t go very well together.

Lucky I broke down right next to a little restaurant where they serve the funnest food!

You chuck the noodles in cold water that flows around and than try to catch and eat it.

Down the other side of the island I found ‘Angel road’. Couples who walk hand in hand across this sandbar, that’s only above water twice a day, are said to find happiness together.

The sad lonely people can write their romantic wishes on pieces of wood or shell and they will come true!

Across the water in mainland Shikoku the humidity got the best of me and I checked into a pretty flash hotel. I needed a proper sleep desperately! (and for 2000 yen I couldn’t complain) 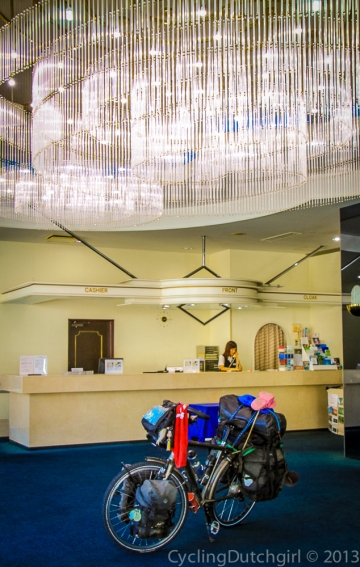 I spent a day wandering around, trying (and failing) not to sweat too much. 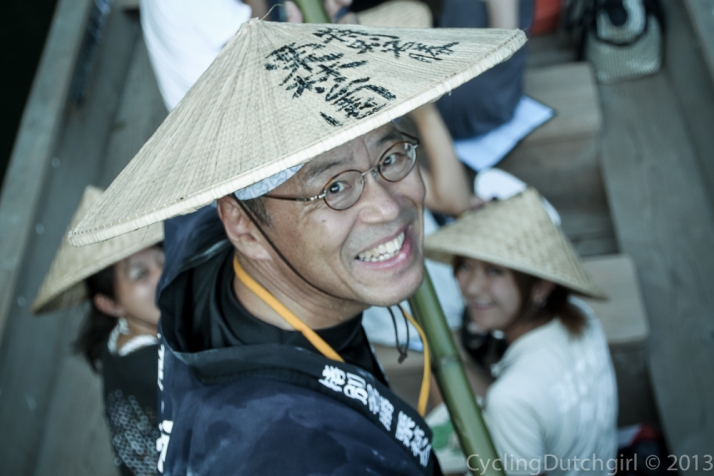 I had a great rest and felt gloriously refreshed until I realised my tyre was flat AGAIN!

Now, before I sign off. A big hug to my mum and dad who, today, have been married for 37 years!!! 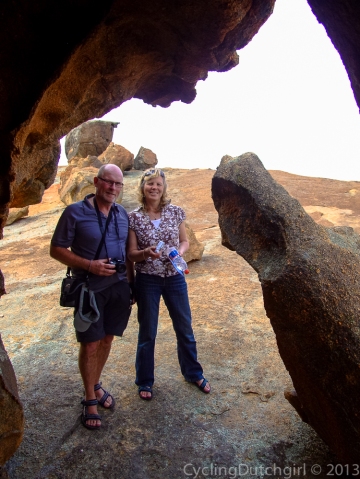 I’m definitely not going to beat that 🙂