Not only because the whole town has been re-build in Art Deco style after a big earthquake flattened most of the city in 1931.

It’s also home of ‘Pania of the Reef’ 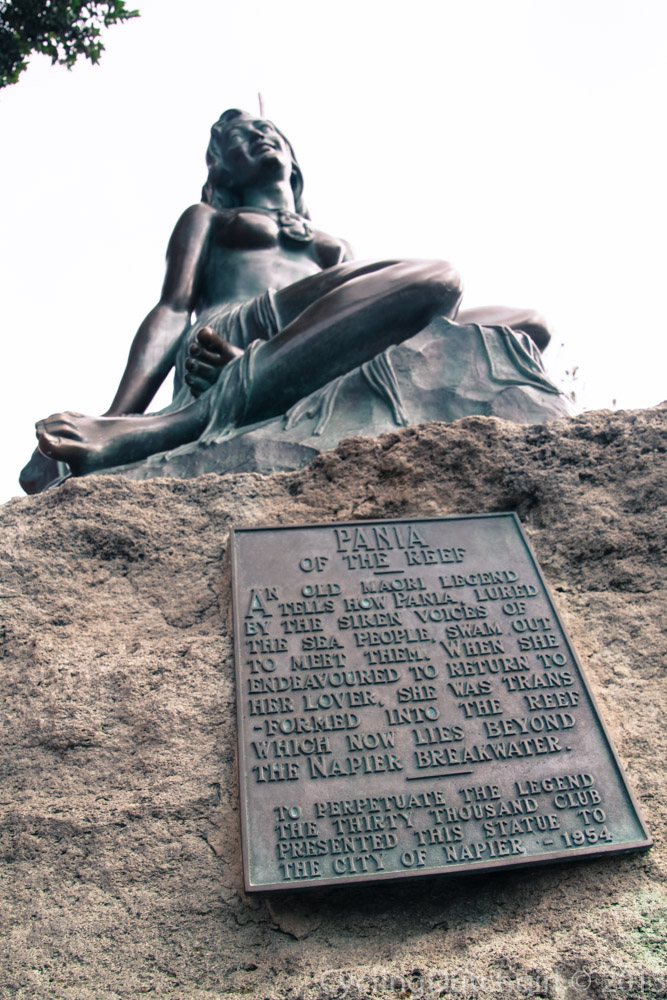 A mythical figure in Maori culture and her statue has been a symbol of Napier since it was unveiled in 1954.

She has since been shot in the head and stolen. But has the claim to be one of the most photographed tourist attractions in the country. I didn’t know this yet when I took yet another…

Carl lives a little out of town, conveniently on the way to my road. The gentle Annie.

So after showing me around, and going to the chocolate factory 🙂

I rode my bike towards this Annie.

And gentle she was not… Probably a little gentler than some years ago when she wasn’t paved yet, but still.

Classed as a grade 4 on the NZ cycle trail website she’s a bit of a tough one.

But well worth the effort, looking at the scenery.

Back in the high country 🙂 Passing places like “Erewhon Station”. Nowhere spelled backwards. And that pretty much describes it.

I had the absolute perfect campsite halfway along. 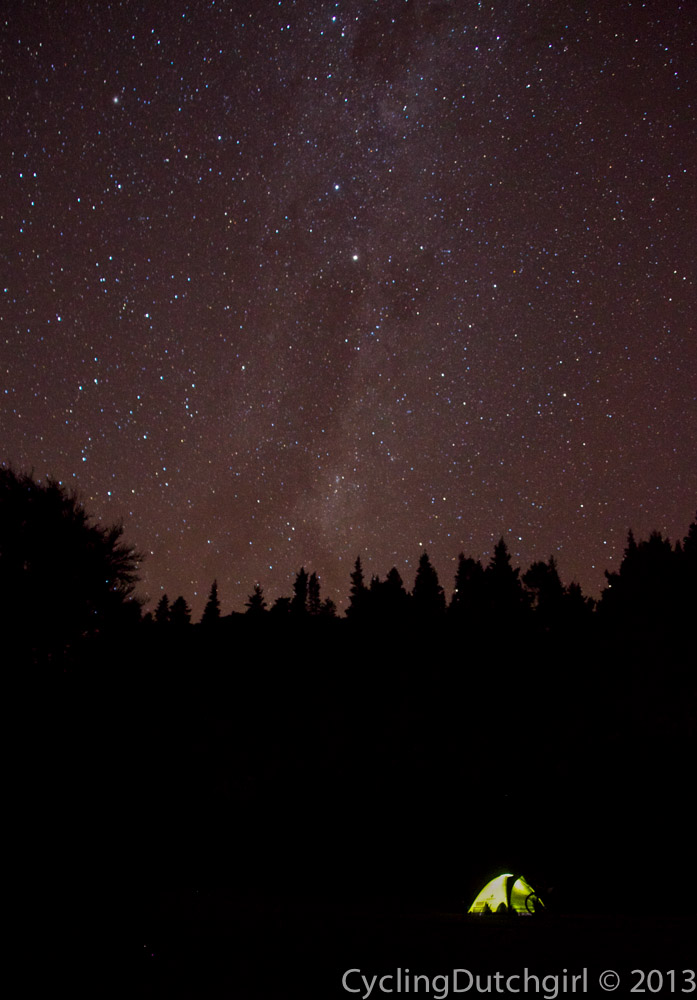 You find the DOC-campsites all around the country, often in the most wonderful places.

I ran into Phillip just after a massive long down hill ride that cooled me down severely.

Last year I met Brendan on the Cavalcade.

He mentioned he lived in Taihape.

I liked that name and it stuck. It’s claim to fame is to be the ‘gumboot capital of the World’ .

There is an annual event that includes gumboot throwing, gumboot races and decorating gumboots.

Shame I missed that.

I did manage to catch up with Brendan. After an evening of chatting and watching Cavalcade-DVD’s I was away on the bike again.

Along roads that the Kiwi’s call metalled. 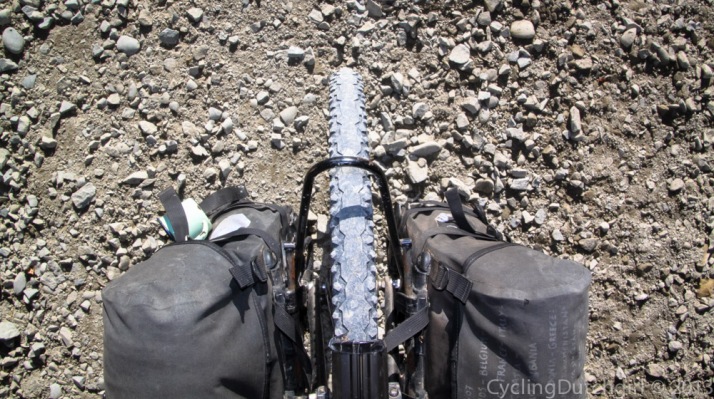 I call them gravel roads and they come in all sort of conditions. Sometimes smooth and flat, almost like a paved road. Sometimes recently graded which means a lot of soft stuff that’s not easy-going.

The one going down the Turakina valley road wasn’t too bad and I was rather enjoying my surroundings when I called in at Papanui station.

Sam at Tangihou had given me the address of his home farm.

He never actually mentioned anything to Guy & Lisa, who manage the place. But they didn’t mind and seemed happy enough to put me up for a night. Or two.

They got to sons, George & Harry. Who like playing in the mud,

The season has just started so when they told me they were off hunting the next day I thought it a good opportunity to stay and see how that works.

First of all we all dressed up. I’ve always liked dress-ups so that was no problem.

Then we were off on the 4wd motorbikes. I like them too. 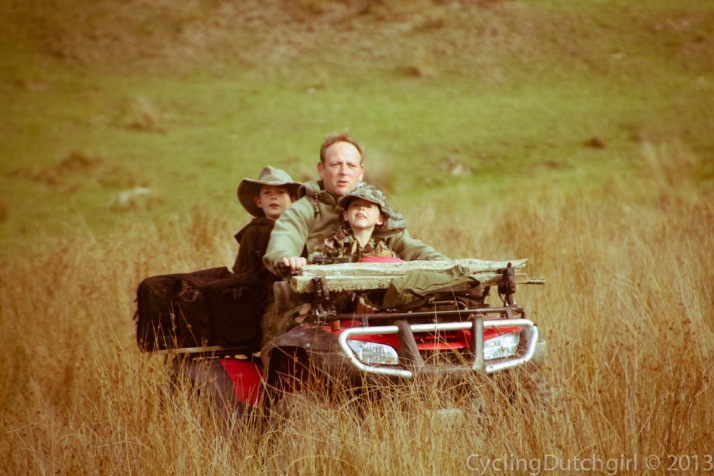 Then the hide-away was set up and we all had to sit very still while dad & uncle tried to call the ducks with a little whistle.

And when they came flying in BANG BANG. The end of their lives.

Some were lucky and got away. Some not so. 12 in total.

The sitting still bit was my least favourite part. The boys (aged 6 – 7) agreed on that one and we all got a little cold and hungry. So it was rather handy there were enough dead ducks to keep our hands warm…

For a long time my alarm clock on my phone had sounded like a duck. It did sound a little morbid to me the next morning so I changed that now.

Guy and Lisa knew the area, and the people, well. So they directed me to a farm, just over the otherside of the hills. But nearly 80km along the road. I found Turakina farm. A most beautiful old house with a lovely garden. 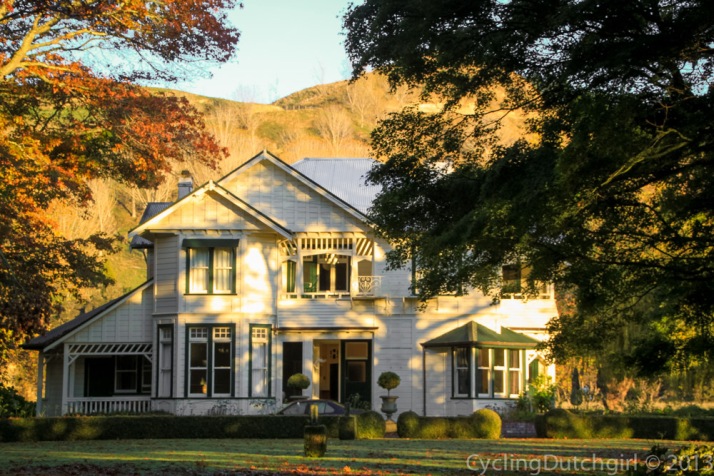 Where I felt like an old friend coming over for a visit.

There’s a few valley’s in this area running parallel to each other. And instead of choosing one I decided to zig-zag up and down 3 of the 5 (the other two had highways running through them). And how lucky I did! Otherwise I would have missed this; 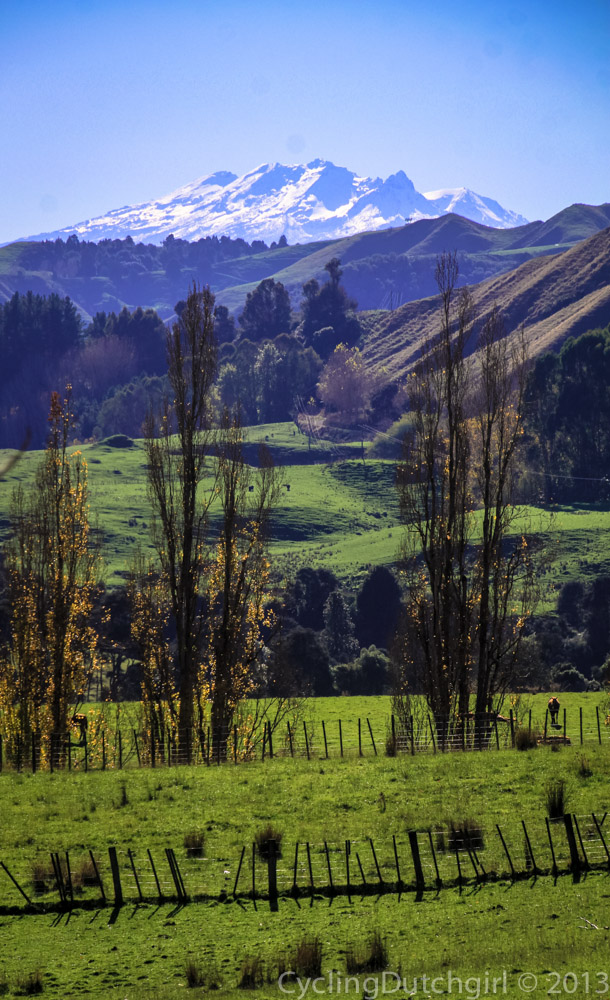 At the end of the Mangamahu valley I found ‘Burma hill’. Already being warned about the steep gravel I wasn’t too surprised I had to push my bike up a km of road after which I rolled towards Mt Ruapehu. Where I went for a hike about a month ago.

I ended up Camping between the sheep on a parsnip farm,

where the Mott’s made sure I was well fed (Parsnip of course 🙂 before setting off in the morning towards the last of my valleys going to Whanganui.

I never realised how much I must’ve climbed until that massive and glorious 30km downhill from Reatihi all the way to the Whanganui river,

Thats right. You find Jerusalem in New Zealand. I never knew that either.

I’ve been told about the convent here.

Where you can stay with the sisters of compassion. 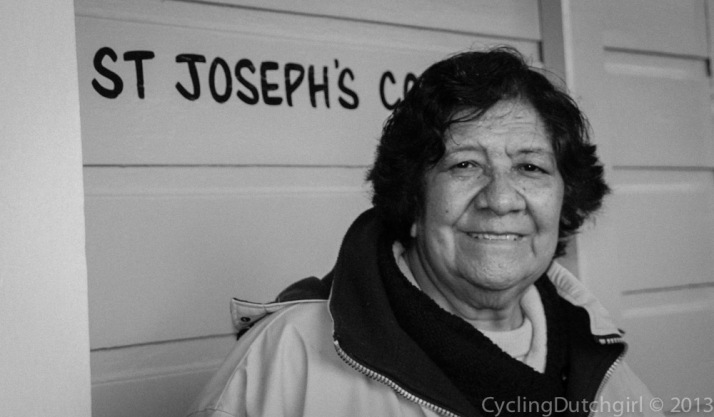 Sister Aubert settled here in 1883 and the sisters of Compassion have been in the area ever since.

These days travellers can stay at the old convent.

The small church has recently been restored and is said to be the most photographed little church in New Zealand.  I helped it along a little.

Mother Aubert, as she was later known, was the first person to grow marijuana in NZ. Of course strictly for medicinal purpose.

This day I left Jerusalem and rode through London and Athens within the next couple of hours.

There’s not a lot of places in the world you can do so. 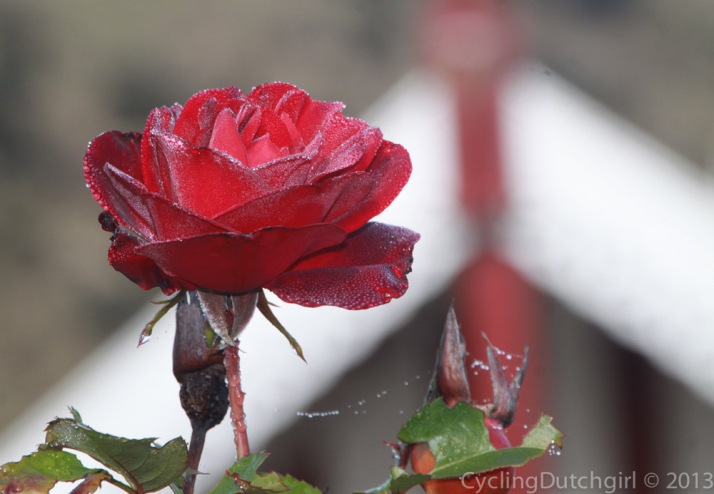 I got a message from Gary Mason. I worked on his farm a few years ago in Australia.

He told me to look up his friend Stewart.

Who worked on the same farm in Australia. About 40 years before me.

These days he lives on his big dairy farm. On the Taranaki coast, 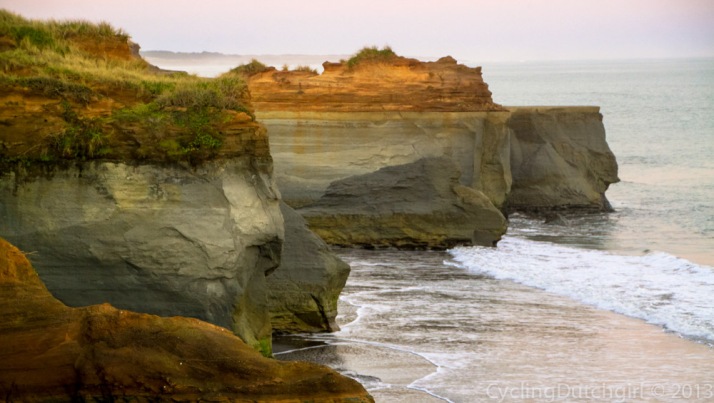 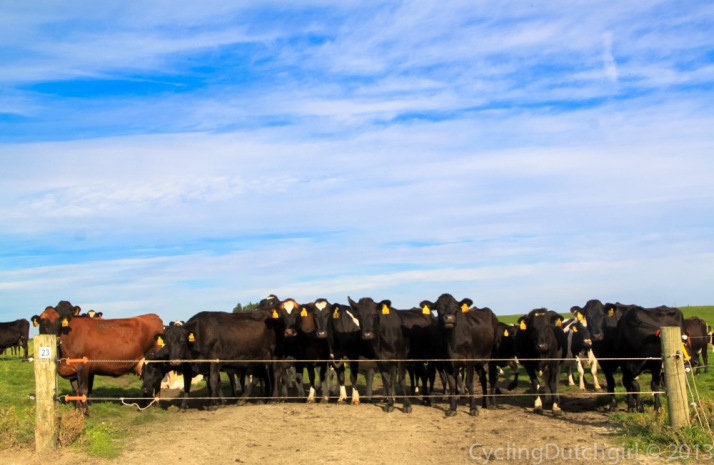 Where he raised a family together with Dale, his wife, who doesn’t like her photo taken. But she did give me ‘pepernoten’. I haven’t had those for years! And got rather excited about that.

I had a go at milking cows. And got shit on my face (but not a lot)

Stewart has a wonderful hobby. 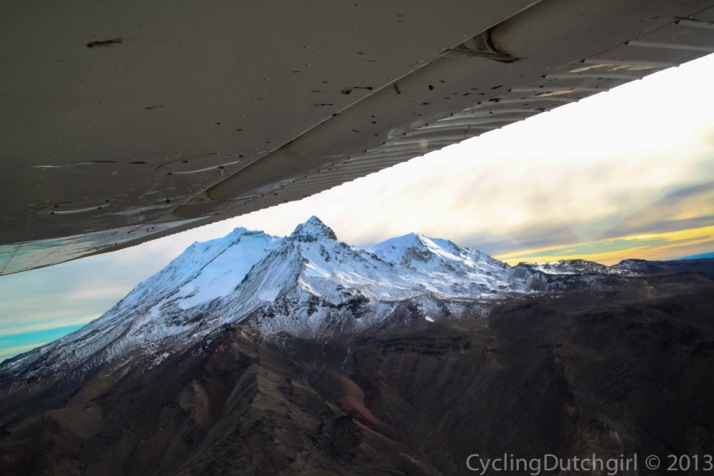 The day I was there happened to be the most gorgeous clear day. So he showed me the country I’ve just been riding through.

It is wonderful to see my roads from a different perspective! We flew around the mountains I’ve rode around and hiked up in the past month or so. ( Ruapehu & Mnt Egmont) And he showed me the largest milk factory in the Southern Hemisphere. 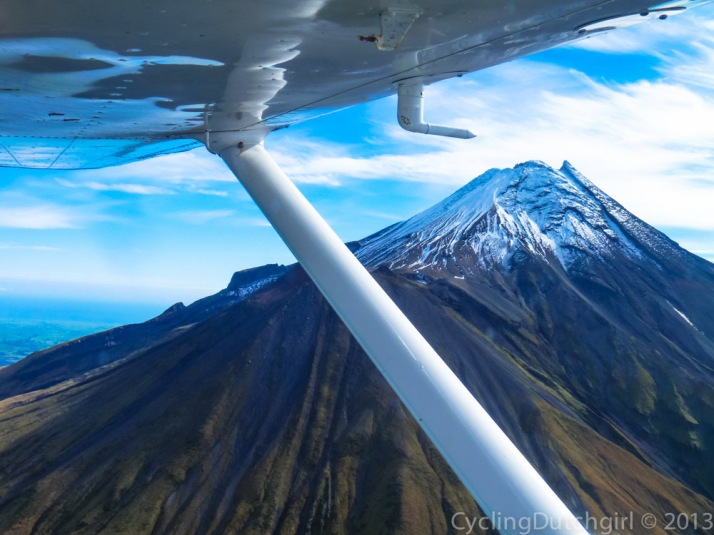 I felt slightly less comfortable when he told me he hasn’t flown this high in 7 years.

But he got me back on land again safely. A wonderful day with a beautiful end as his Daughter Vicky took us all to the beach to watch the sunset.