I noticed two guys making coffee on my way out of the Mavora lakes. An excellent reason to have a break. I’d done 2km already after all. Mark & Richie, two Canadians, were on their way to Queenstown as well. So we teamed up.

I was surprised to see a small traffic jam on the track out. A film crew was busy doing things film crews do.

They were shooting scenes for the movie ‘Walking with dinosaurs‘ We even spotted a pick up full of plastic dinosaur models. When they let us through a guy was waiting at the other side with three coffee’s. Naturally we stopped for another while.

Heading north I realized I just crossed the 45°south latitude for the 6th time. In less than 2 months. Only one time did I ride the same road twice. I did not touch any of the four main roads crossing the line either. That shows how very logical my route through the South Island has been…

It turned out to be one of those glorious sunny days with hardly any wind and low gradients.

Perfect bicycle touring conditions. We were aiming to catch the ferry at two. The road we were on took us to the south side of lake Wakatipu. From where we could see Queenstown across the other side. But with numerous photo opportunities along the way we never made it in time. So while Richie and I relaxed, had a beer, and talked the young girls at the cafe into giving us free cakes (he’s good at that) Mark decided to jump in the lake and wash himself & his bike. We got the boat at four instead.

The TSS Earnslaw is a vintage steamship. launched in 1912 it is believed to be the only coal-fired passenger ferry still operating in the Southern Hemisphere. We pushed the bikes onboard and while the Richard headed to the bar and Mark checked out the steam engine, I found a spot next to the lady with the piano who enthusiastically started playing tunes like ‘my bonnie‘, ‘Clementine’ and ‘waltzing Mathilda‘, encouraging everybody to sing along. I sang my lungs out to great amusement of our Japanese boat-companions. Or annoyance. I couldn’t really tell.

‘Now I know why you travel alone‘ Richard commented… But he did join in, and so did Mark when he located us (not too difficult) 🙂

My lovely friend Doris had urged me to have a ‘Fernburger’ in Queenstown. If someone in Austria, you met in Ireland, tells you to have a burger in New Zealand, then surely you must. And she wasn’t wrong. Yum!

As I headed back to the ridiculously overpriced campground (60 dollars for three little tents & bicycles!) the boys tried their luck in the casino.

The road through the Crown ranges between Queenstown and Wanaka is the highest paved road in the country. 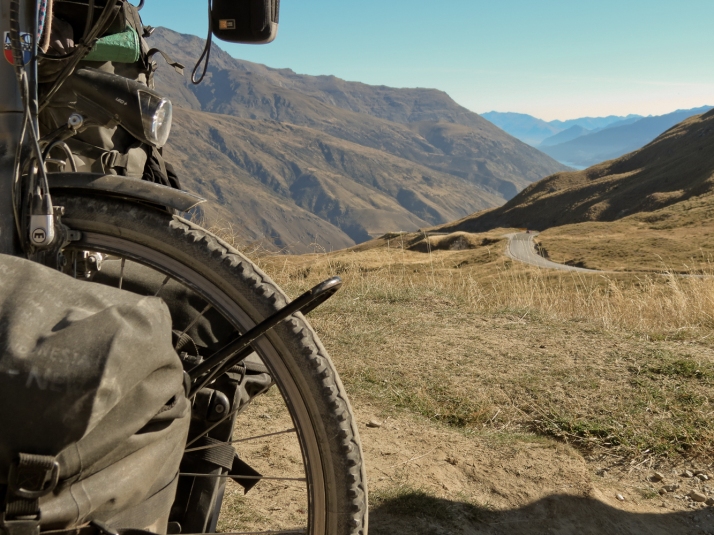 With 1100 meter it’s a good climb up. My map showed a pub just near the top. Flying down the road I figured I missed it when I suddenly saw the Cardrona Hotel. A great little old pub where the coffee & company was good. 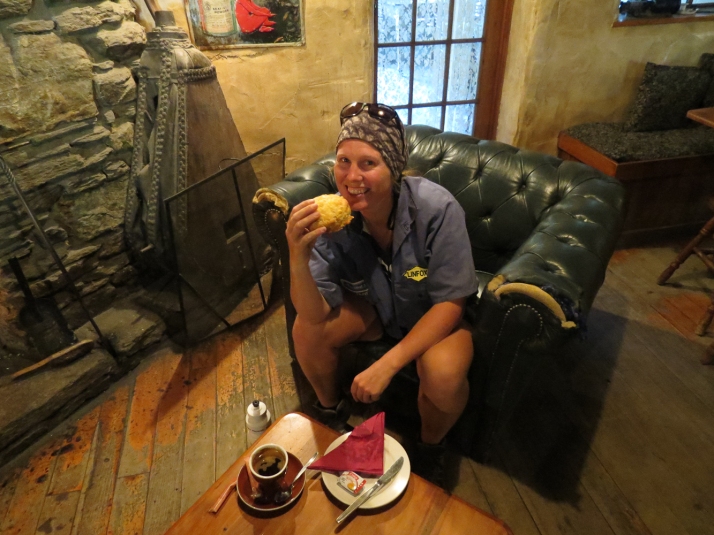 In Wanaka I noticed a Royal Enfield just outside the supermarket. I’d seen the bike earlier that day when it overtook me with a friendly wave. So I had a chat to Harry. 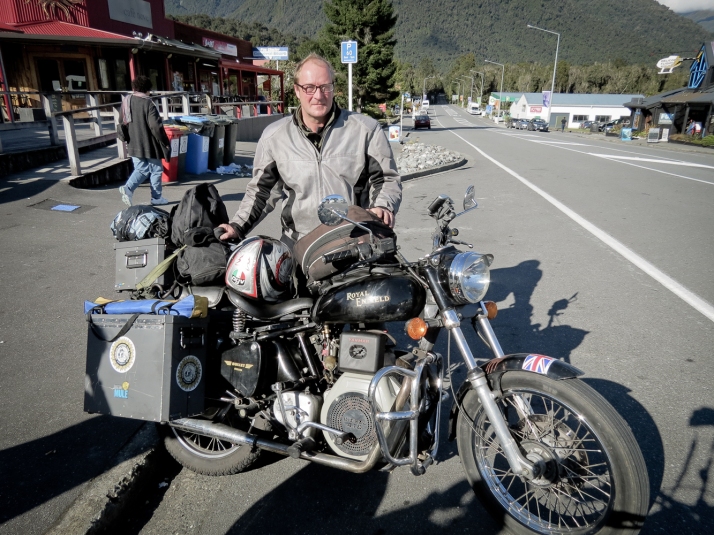 Harry rode this Enfield from the UK to New Zealand. On vegetable oil! The bike has a diesel engine and he’s trying to get around the world as environmentally friendly as possible. Check out his blog

I mentioned a bicycle is environmentally friendly too, he told me that idea has never once crossed his mind… 🙂

To my surprise the sun was shining again as I set off towards the West Coast. I had decided to keep moving for a while to actually try and make it to Nelson, where I had a friend I liked to visit. Nelson was a mere 848km away.

The West Coast, that every cyclist I met absolutely loved, wasn’t that great. In my opinion.

There was nothing wrong with the road. The weather was glorious. And the sandflies were not too bad.

I saw some Pukekos along the way. A dopey looking bird. 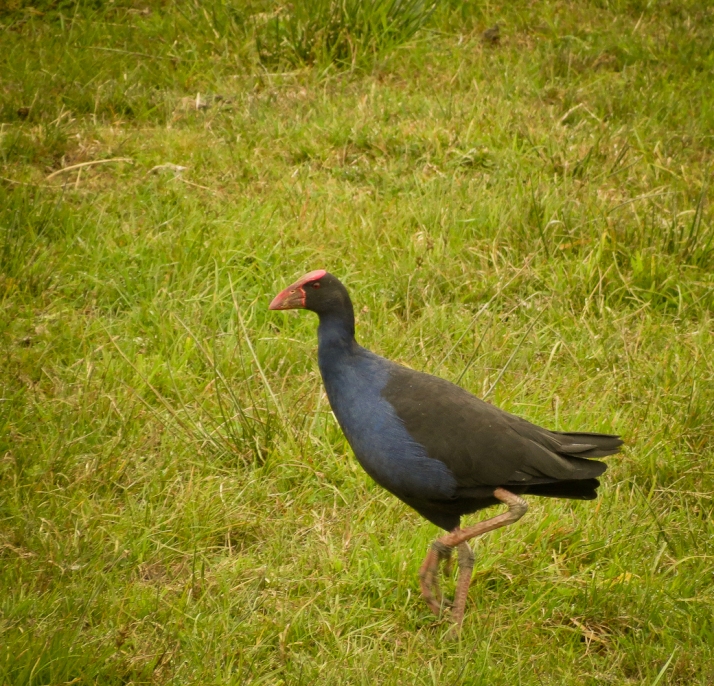 The West Coast gets more rain then anywhere else in the country. Not so when I cycled there though.

Every single person had warned me about the sandflies. Evil little buggers who suck your blood whenever they get the chance. Maori legend has it that when one of their gods saw the beauty of the west coast she was afraid that humans would wish to live there forever. So to remind them of their frailty and mortality she liberated sandflies, mosquito’s and fleas. They’ve been doing a pretty good job ever since. 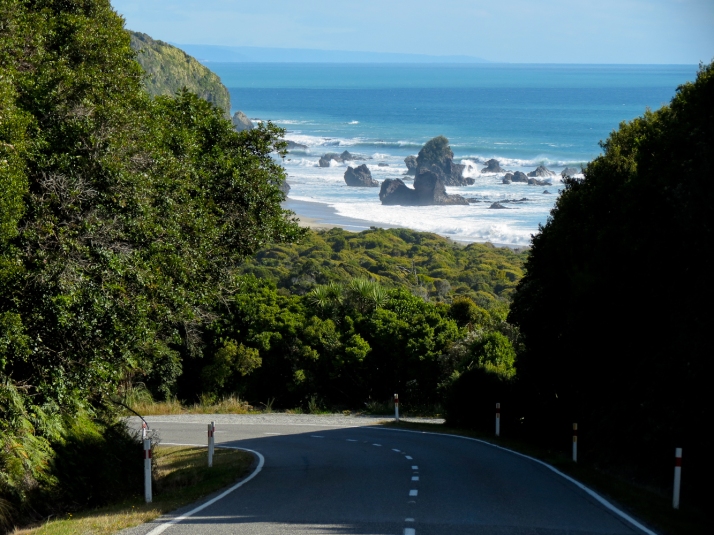 I have myself to blame for cycling it on the Easter weekend. There is only one road up the coast. There was a lot of busses and campervans heading from viewpoint to viewpoint. And sure enough. You can take a pretty picture from the viewpoints. 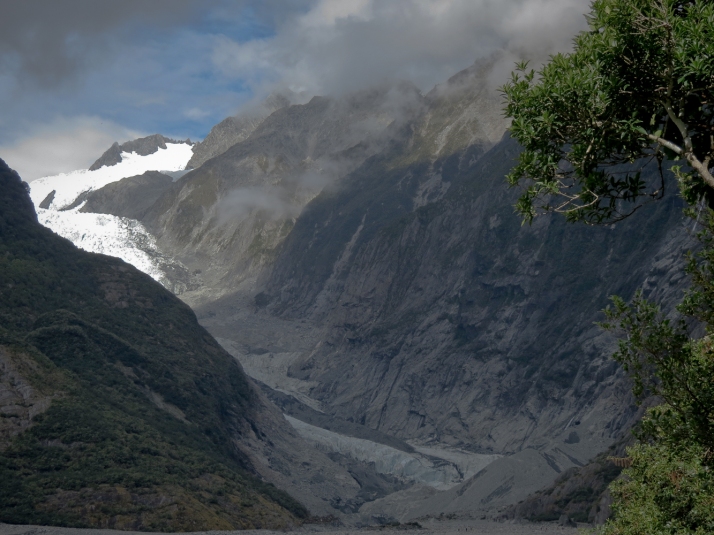 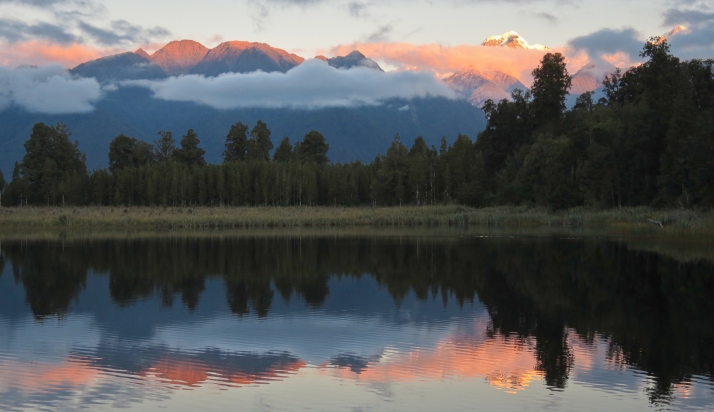 But I am spoiled with remote dirt tracks. So this busy strip of bitumen was. Well… ehm. Different.

I did like the little old sheds in farming area’s. 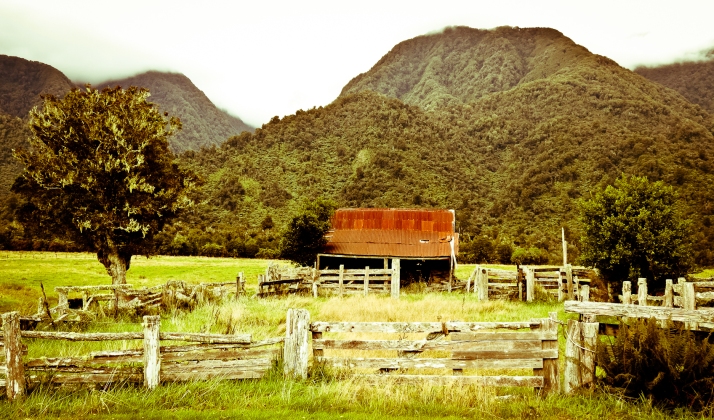 Then again, also because it is one road, you will run into every other cyclist coming your way. Some, surprisingly, don’t stop and hardly acknowledge you. While others do stop, and you sit and talk for an hour or more on the side of the road and share coffee and scones. I like that.

Like with Manju here, he lives in the States, but is originally from Amritsar. I remember riding my own Enfield  through Amritsar.

A familiar sound made me look up as I was about to ride out of Fox.

Harry just rode in from Wanaka and asked me if I have had much rain. I had none whatsoever while he ran into quiet a bit on the way up.

We ended up staying at Fox and met up with Jo and Rob. They are from the North Island and on their first trip down South. On a Triumph. 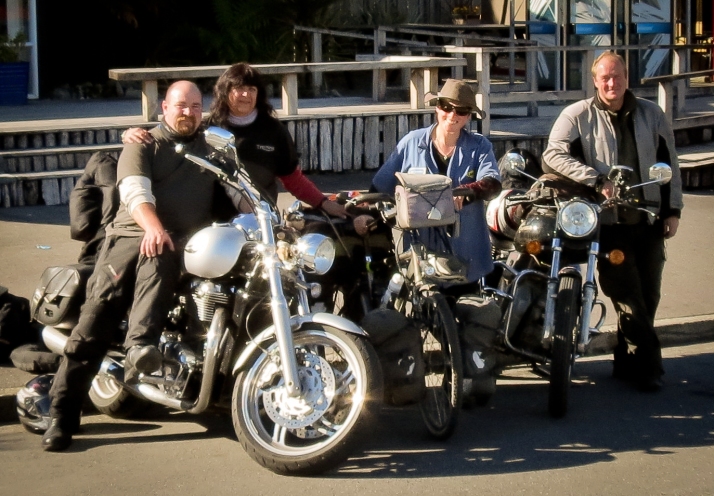 Before setting off in the morning they bought both Harry and me a spectacular breakfast that kept me going the whole day. (well, ’till Franz Joseph anyway) 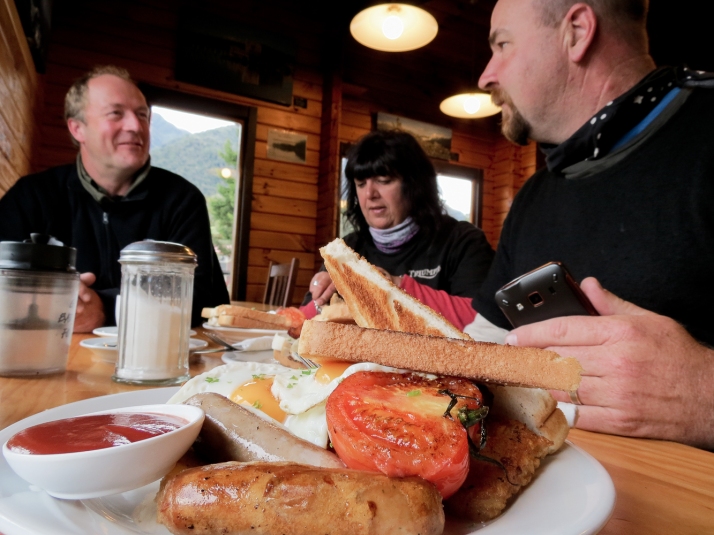 And then they shot off on the bike while Harry tuffed tuffed away on his and I started peddling mine.

It was that evening the clouds started showing and a few drops fell just when I ran into a young girl from Germany who invited me to stay at her place. It was the next morning the heavens seriously broke and it poured down the whole next day. The girls let me stay and showed me how to milk cows, as this is their job for the time being. 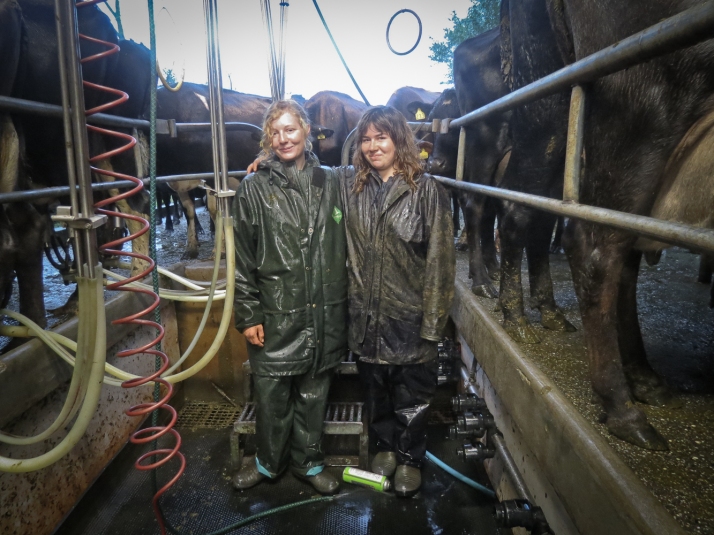 I thought it was (stereo)typical to stay with two German milkmaids.

That was the only day of rain I experienced in the last weeks.

It was great camping at various DOC-camping areas. One evening I stayed at the grounds opposite the Mahinapua-pub.

This pub is world-famous in New Zealand. Something to do with a cheese commercial. But of this I was unaware. I walked in to see if there was something else but my pasta & tuna for a change.

I didn’t expect to run into a crowd dressed up as “anything starting with a P”…  But I did.

A Kiwi-experience backpacker bus had pulled in and stays in the hotel overnight. It was lucky for me because the owner didn’t mind a person more for dinner. So steak it was. Yay!

A message from Harry told me he was broken down 130km up the road in Reefton. So I figured that would be a good goal for the next day.

We discovered it’s a lovely looking town, but they got a thing or two to learn about making pizza’s.

We said goodbye for the final time. Or so I thought. But I found him 25km down the road with the bike in bits. This is how I know Royal Enfields to look like 😉 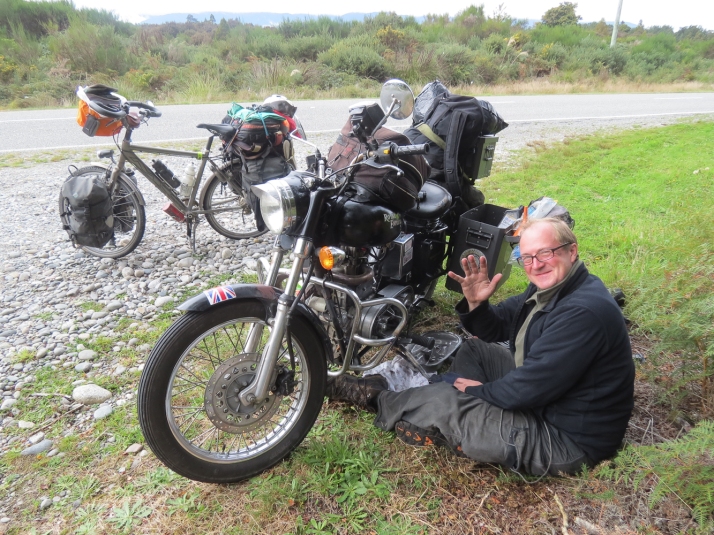 I met Nina 4 years ago in Thailand. We met again 3 years ago in Indonesia. Since that time she has told me to come and stay with her in Nelson. And sure enough, I made it!

She also told me I must meet her friend Neil.

Neil is building a house. And a boat. After having sailed around the world for four years he came back to Nelson. But, as many long term travellers, he is getting itchy feet and planning his next trips. In the mean time he entertains himself by kayaking and riding bicycles. He also likes taking people out while doing this. And that was lucky for me.

We took a day to have a look at an island in the Tasman National park. 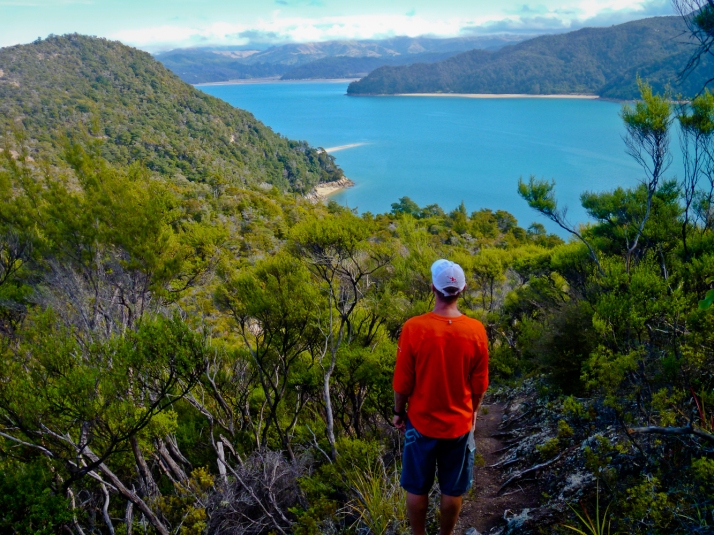 I was rather happy we were together in one kayak. Neil is fast. And only by being in the same kayak did I manage to keep up with him.

I loved seeing all the seals on the rocks. A little sad we didn’t see any dolphins, but happy we didn’t see any killer whales. It gave me a bit of a fright when he mentioned they’re out here. They are very big compared to a little kayak.

Next day we went up the hills to go mountain biking. Together with Nelson, Neil’s friend. I had no problems cycling up the hills. It was the way down that slightly worried me. I might need some practise at this downhill-thing. But apparently I wasn’t the worst they’ve seen. That’s a compliment I guess.

So that was all excitement in Nelson. Well, that and cutting of my hair. 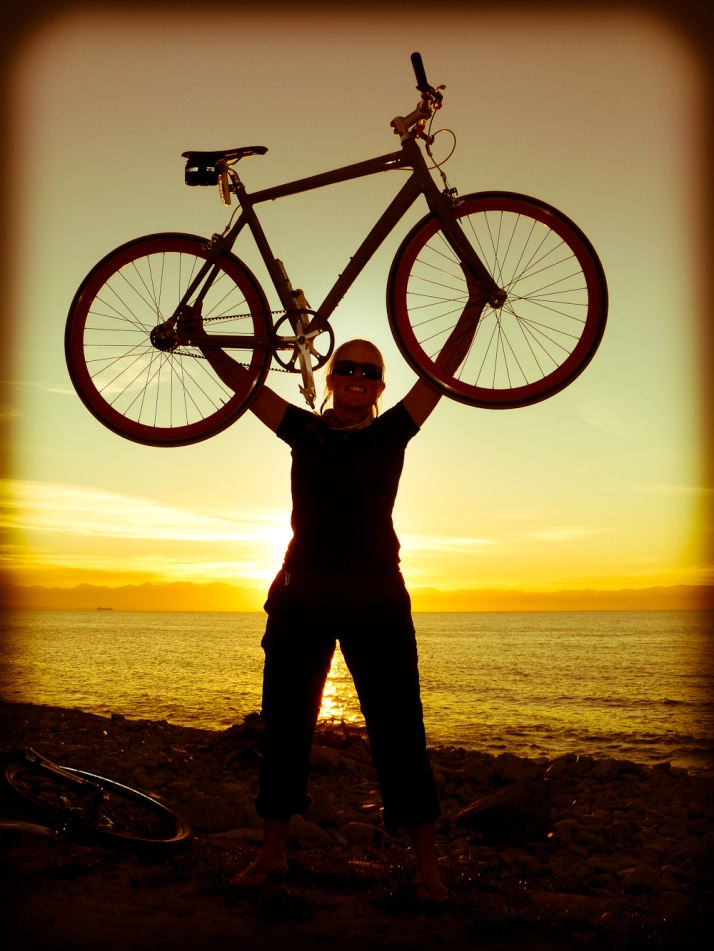