Back in Malang I could hardly wait to try out my new bike.

But I did spend a few days acclimatizing and just lazing around with friends.

The morning of my scheduled departure I was up and bouncing around my hotel room at 3a.m. waiting for the first shimmer of sunlight so I could get going.
I was so excited to get on the road again…
When at noon I already clocked up 125 kilometers I figured that maybe, just maybe, I should be taking it a little easier.
I did after all have more then two weeks time to cover the 500 or so km to Denpasar, Bali where I should be picking up my cousin from the airport.

So I slowed down a little, took it easy. Rode parts of the same road I did last time I was here with the main difference that there wasn’t rain pouring down all day. And, not to forget I had no trouble at all what so ever with my chain jumping all over the show. That was a minor inconvenience on my old bike… And an impossibility on my new one 🙂

I treated myself at a little hut by the sea where I was accompanied by a bunch of people from Jakarta who happened to speak Dutch as well. They’d gone out fishing that day so fresh fish was the dish that evening. Later, as I sat with a cold Bintang on the pier watching the stars I figured that live isn’t too bad. 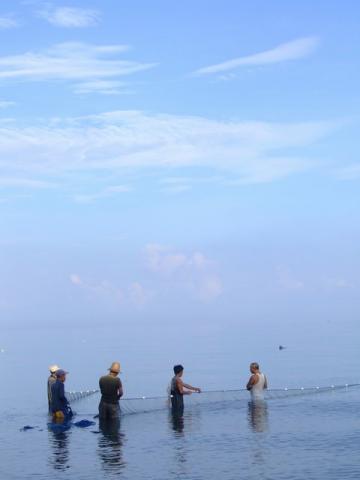 Same thought came up again when I had a break the next day and sat under a palm tree on the beach drinking out of a coconut. Of all the places I liked to be right that moment this one was definitely in the top three. 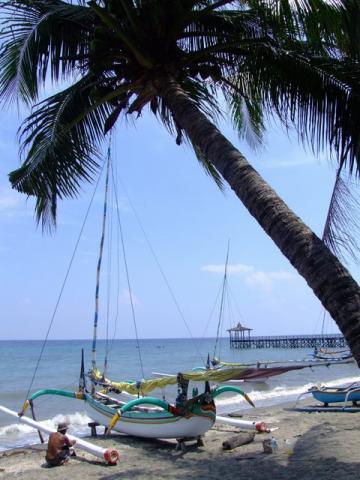 So up on the bike and peddling. It’s a bit warmer this time around, especially when you’re going up a hill around midday in the burning sun and you realized you forgot your hat. But I’m not complaining! no no no.

Just when I stopped under a tree for a drink this little red car pulled over and out jumped an Indonesian couple, about my parent’s age. Where I was going? Am I alone? You want to stay at our house tonight..? All the usual questions in broken English but very friendly all the same. 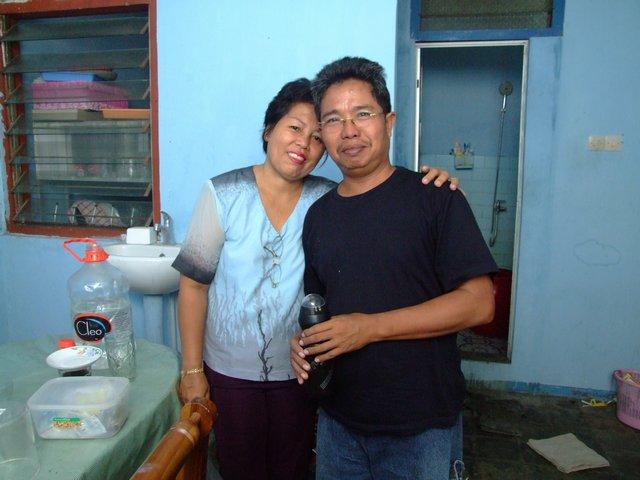 Since I’ve made it a bit of a point never to refuse an invitation I accepted happily and we switched phone nrs so I could call them when I’d arrive in their home town of Banyuwangi. So I thought. So it usually goes. Especially since I still had 60km to go.

But they had other plans. Despite me telling them there is no need, and I will find the way, I promise to call… They insisted firmly to drive right behind me the WHOLE 60 kms to town. Of which the last 20 with thumping music on max volume… To give me that extra push… I guess. The scenery was nice.

I felt a bit guilty that I actually had to get of my bike every now and again. But what could I do. Have to eat. Or I’ll faint. And then I might damage my new bike…. can’t have that happen.

But they meant it all very well. I’m sure, and when we finally got to the house they told me; “So. Now you leave your bike and all your bags here and we go and sleep in our other house 40km away..” AAAHRG!! NO! I’m not leaving anything anywhere. For sure there wouldn’t have been a problem but I really don’t like to get separated like that. So we stayed in the first house.

I was eager to get going the next morning, I like cycling in the mornings when it’s still a bit cool. But first we drove to get breakfast somewhere. On the way back they asked me about what time I like to leave tomorrow. Tomorrow? I would like to go today… So I convinced them it was real necessary for me to leave today and we said our goodbye at the ferry (where they drove me… another 15km with a car on my heels, or wheels… actually) 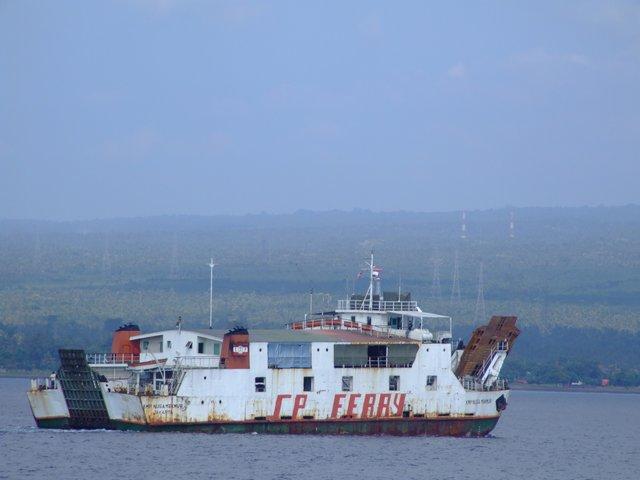 I’m sure they mean it well. And they would probably be worried about me, they’ve got kids my age. And they still call and txt everyday (a few times) to see how I’m doing.
I start to feel slightly claustrophobic.

And then I was back on Bali. With lots of time on my hands.

I decided there is no need to hurry and I’ve already cycled a good few roads on this Island that is really rather small. So I started turning of the main road at every opportunity to see what’s there. Mostly sea. 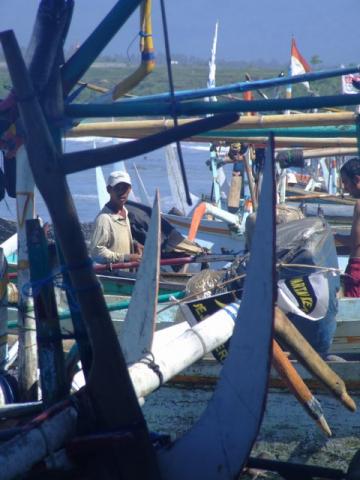 I’d get to a beach along small roads full of curious faces and kids shouting. And then I’d turn back. Or I try cycling on the beach for a while… but that didn’t prove overly succesful. 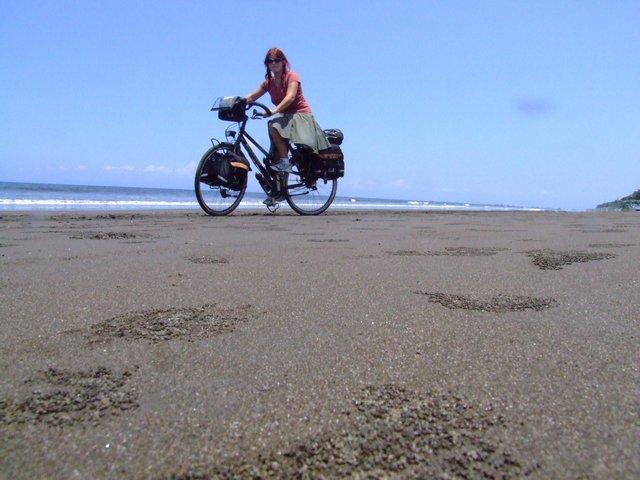 A girl on a scooter asked me to come and see her house. So I went and saw her house, I really liked the chairs she had! They were made of old tires and extremely comfortable.

We walked to the beach, but not along the roads I was getting used to. No, the shortest line from her house to the beach went straight across her village through other people’s houses and across their land. You wouldn’t go walking around like that yourself but it was great to catch a glimpse of daily life. Family’s preparing dinner, kids playing in the house, granddad watching TV. No one bothered much about me walking straight through their living room…

I continued my experiment of getting of the main road at every possibility just to see what’s there. There’s fields, and other people on bicycles,

big factories that smell bad and roads that keep coming back to the same point (well, that happened only once)

I stumbled across Medewi beach. Apparently a great surf spot. I liked looking at the waves…

Went in with a body board to see what that is like… I can tell you, it’s like being inside some kind of enormous washing machine with a whole lot of hard stuff around (surfboards). I was shaking when I got back on land! Needless to say I only tried that one time. Men… I rather stick to my bicycle.

I went for a spin up the mountains while I kept my room in Medewi.
There was this big holiday coming up called NYEPI. It’s a silent day. No one works, nothing is open, no lights are on or fires burn and tourist are told to stay inside their hotel. If you don’t you get hit with sticks or have rocks thrown at you, it sounded a little steep to me but I wasn’t gonna try it out. Besides, I was perfectly happy staying at Medewi reading books… So much even that even after NYEPI I continued doing that for another week.

I rode up the hills just before NYEPI, and that was a special day too. I don’t know exactly what it all was about but a bunch of young guys on motorbikes dressed in traditional clothes explained to me that; “Everybody goes to the beach to put the God in bath. Then they go back to their villages to have big ceremony at the temple” 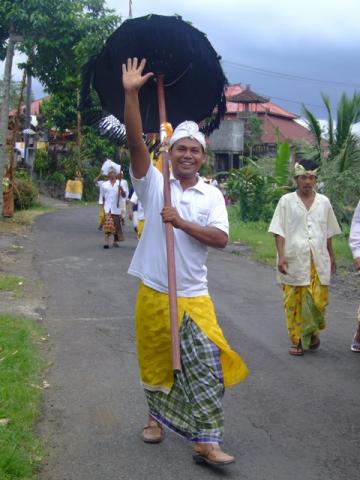 I saw most people while they were heading back to villages, busloads full of pretty dressed up people and a million motorbikes all happily waving at me.

You see offers along the roads everywhere and big poles made of straw my grandma would like (she’s into making stuff out of straw).

When after some hours sweating I nearly reached the top I decided to take another road down, expecting a lovely long down hill. But no. This road had wrapped itself over a few ridges with no consideration of me. Extremely steep climbs and extremely steep downhills kept following each other up with a bunch of spectacular views and some interesting temples thrown in till I reached the main road and headed back to my hut at the beach.

And there I spend a good amount of time while meeting some interesting characters. Firstly the manager of the hotel who promised me a discount if I gave him a massage (Oh, I don’t know how to do massage, but my sister does!…. got the discount anyway hehe) 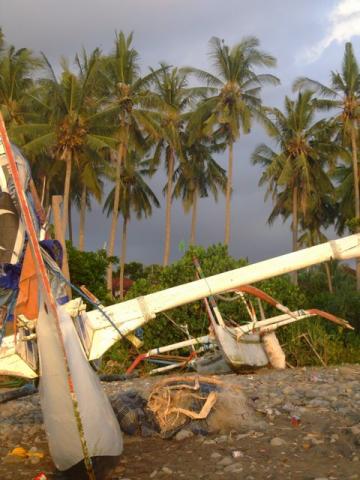 Then Dorothee, the first solo-cycling woman I met on this trip! She just came all the way from Germany across Russia, Mongolia and China! A larger distance then what I’ve done, in less then half the time… She’s hardcore! Then again, I must be the laziest world-cyclist around.
And Bobby, an Australian surf dude / male model / English teacher in Thailand. Who I spend a lot of time talking about the meaning of live with while beating him at backgammon 😀

And of course all of the Balinese surf dudes who persistently kept giving me enormous amounts of attention (I was the only girl around most of the time, when another one appeared they would be all over her before you could blink)

Had a lovely time, read 7 books, had fresh fish straight out the water and drank lakes of coffee. Until today. Really had to move on because tomorrow my cousin, Willemijn, is going to arrive!

Now we will have some great adventures together!

14 thoughts on “Bali back roads and more beaches”