And then you’re in Calcutta two weeks. Getting nowhere.

I managed by cycling from office to office across town (still love riding in Indian cities!), to get a meeting with a Captain. I wanted to get on a ship to South East Asia.

And Calcutta wasn’t completely un-entertaining while I was there. 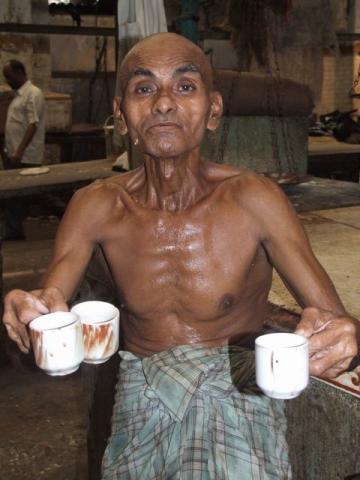 I rode a rickshaw around town (the rickshaw-wallah actually let me drive the thing!) to find the ice-skate rink, there actually IS a ice-skate rink in Calcutta!!, sadly it was closed at the time.

We went to a big water park. Where, in order to fit in, I needed to rent a “bathing suit” Long pants and a t-shirt that slowed me down enormously on the water slides. Remember when you where a kid and pulled your pants down in order to go faster…? Uhum. Just had to make sure they where up properly when I hit the water… 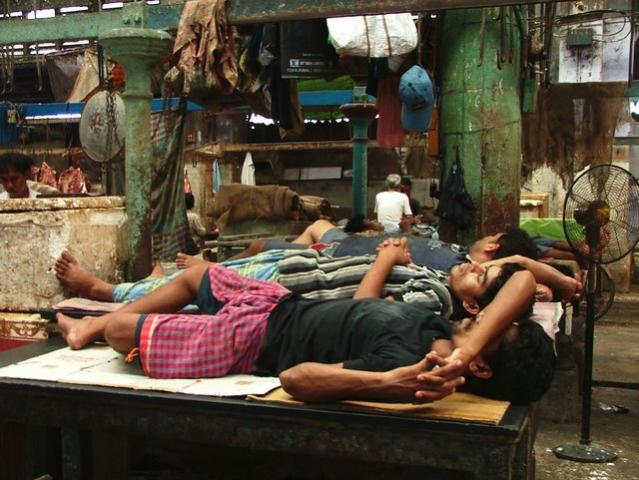 I went to the movies a few times and of course stayed up to watch Holland play France and Romania together with fellow Dutch-men and woman, and a bunch of Irish girls who are always good craic to have around.

We had to go to a 5-star hotel to watch since it was the only place open this time of night. At the same time as the match a rock-band played. We had some trouble getting in since guys aren’t allowed flip-flops or singlet shirts, so I had to swap my shoes with one and my shirt with another in order to get everybody passed the bouncers. Girls get in even if they wear a bin bag. 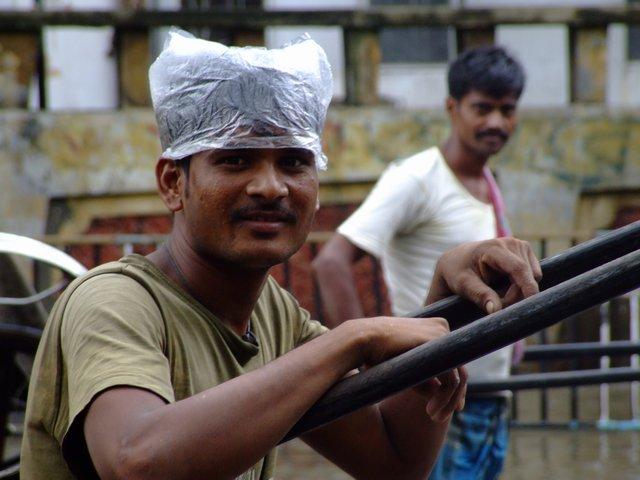 The only slightly annoying thing in big cities in India is men. In general, but especially when they walk, or drive, passed just a little too close so they can touch you. It gets on my nerves. So when, in a small street a car passed and a hand came out of the window to grab my boob I went after them. And when they slowed down in traffic I punched the guy through the (open) window in his face. HA! That’ll teach him. Idiot. 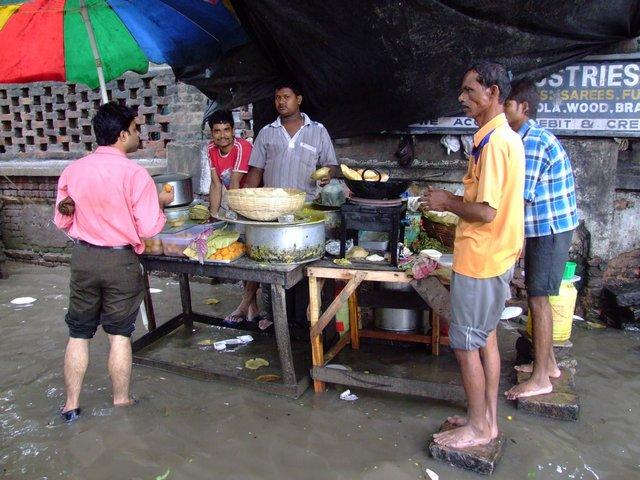 The rain finally seriously arrived as well. Armed with my umbrella I waded through streets knee-deep in water trying not to step in holes and avoiding the waves from by-passing busses. Surprisingly nobody seemed to find it either funny, or annoying. Everybody just went on with their business like nothing was happening. Less people walked to close to me though. Hurray!

Then, for the first time in India, just before I was about to leave my belly went funny.
Lucky for me a Swiss doctor was just looking for people with diarrhea for a study. The good thing was I got cured, and 10.000 rupees that paid for my flight. There was no bad thing…. Brilliant huh!

So yes, I flew to Bangkok since Tibet just opened the borders a bit too late. And other overland options where not possible for various reasons.

So after a night of no sleep I cycled out of the airport onto the highway, it’s nothing like in india! 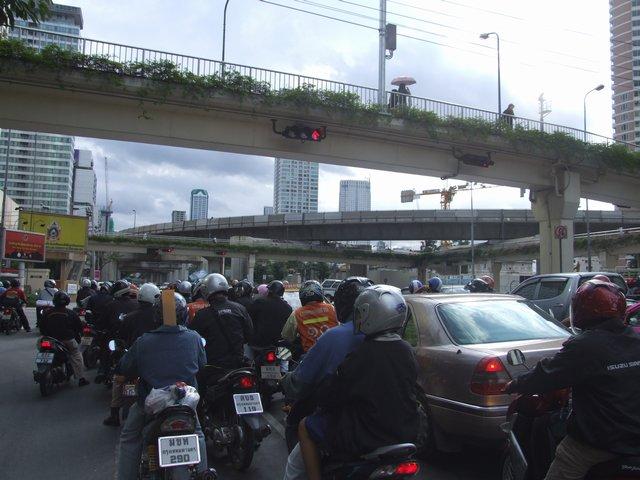 Here, the traffic actually goes fast and you don’t see cows or bicycles on the highway. Just cars and busses passing you with 120km/h. Most people smiled and gave me the thumbs up, a police car slowed down asking me where I was going and drove off saying “very good, very good” as I cycled passed the bicycles-not-allowed-on-the-motorway-sign….

And I was shocked! All through India, and many countries before, I haven’t seen any female-flesh. I was wearing a Salwar kameez myself (dress over long trousers and a scarf).
But here, girls wear clothes so little they are nearly naked! Specially arriving in Khao San road, the main tourist-hub, where both western girls and locals, girls and lady-boys… were walking around strutting their stuff. The whole place seemed a bit like a big music-festival. Apart from the music.

As I sat down for a coffee planning my next move a ‘cyclingdutchguy’ walked past (although I didn’t know that yet). He was surprised to see me, expecting a man. We talked and he’s done a similar trip in ’96 and has been on the road ever since…. See what can happen 🙂 http://www.osmosno.com

We had a beer together and watched Holland embarrasly get beaten by the Russians
He also gave me lots of tips and ideas, like heading north, instead of south…

One day I went shopping. I needed a new bra since my good one mysteriously disappeared in India. Figured I’ll find one in Bangkok if at all.

Try going to a mall here! I spent hours and hours wondering around and didn’t even manage to see all shops on one floor in an eight-story shopping complex! And there where four more in the area… You can spend months just on them few square kilometers and still not see every shop.
And I still haven’t found a bra that’s the right size AND the right colour.

When I finally tried to make my way back I took the sky-train. I was blown away by the view! It all seemed extremely futuristic to me 40+ story sky-scrapers and roads and walkways on different levels. I expected to see a UFO any moment. It was beautiful! Even more so when you witness the lot from the 22nd floor of one of those skyscrapers. As I found out the next day at Christoph’s place. Born in Germany he now lives in Bangkok and we met in a bike shop where my bicycle got a facelift. When the shop didn’t accept my card he helped me out, and when I mention I was going to get a Thai SIM-card he took me to his place where he still had one of them lying around that he wasn’t using. How sweet!

And then, I found myself on a luxurious sleeper-train with the best train-food I’ve ever tasted, 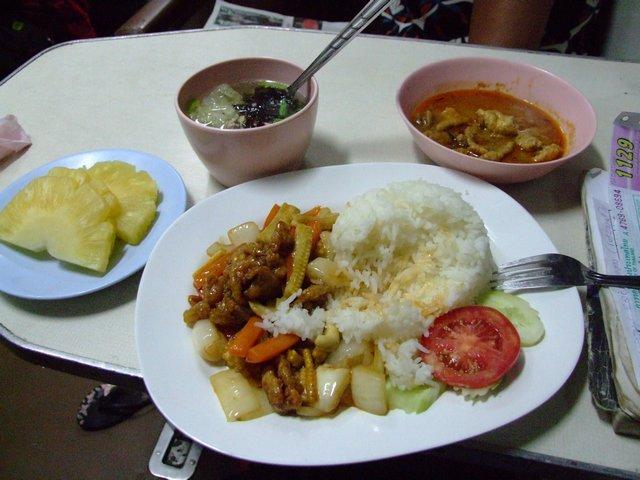 heading for Chiang May as Sebastian suggested.
It’s a town where you can do lots of activities, like cooking classes, yoga, bungee jumping, Thai boxing and mountain biking.

On a whim I decided to go mountain biking.

Together with an international bunch of guys I got geared up. I looked and felt like a space-man, but that the stuff came in handy showed when I came off my bike… on the practise round… Damn!
It went better after that, even though the tracks got very muddy as it started pouring down rain and it was very, very steep in places, I guess that’s to be expected when you’re mountain biking.. It was great fun! Very different from what I usually do. Luckily I wasn’t the only one who came off.

Now my legs are nicely bruised and battered. It’s time to climb on my own bike again and have a holiday.

The idea is to cycle around the North (as I would have could I’ve gone overland..) check out this golden triangle and then down Laos before ending up in Bangkok again where I left some of my stuff.

From then on I’ll most likely head south. Roughly in the direction of Australia..

19 thoughts on “And into the land of smiles…”