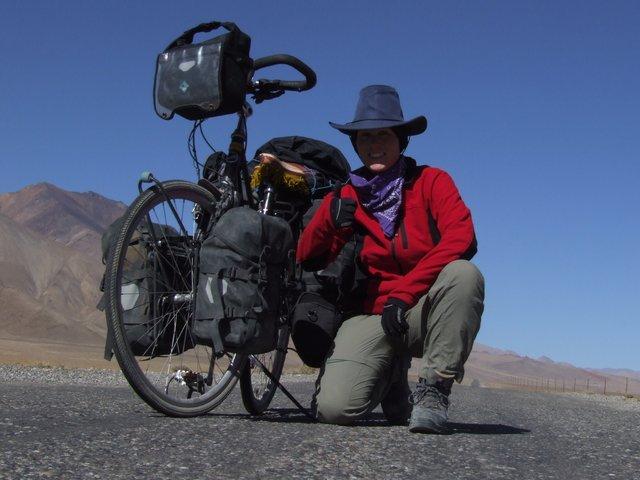 The east of Tajikistan is something different, never have I been to a place so remote and cut off from the rest of the world before, not even Donegal.

It’s a windy place, so extremely windy you wouldn’t believe it. I had the incredible luck to have a tailwind most of the time that blew me over mountains like it wanted to get me somewhere in time. I can’t imagine trying to fight against this wind so thank God or Allah or in this area maybe Agha Khan I didn’t have too.

It’s also an empty place, empty and brown, big open spaces with every now and again a frozen stream and mountains. And it’s cold! I know now I havent got the right gear to cross Tibet so at least that was a good test…the temperature gets to minus 50 in winter, you wonder why people voluntarily live in a place where nothing grows and hardly anything lives. But the people are warm and friendly, and even though they got hardly anything themselves whenever I was near a house I got rushed inside, made comfortable near the fireplace and the tablecloth got spread out on the floor to have tea and bread, or the salty tea with butter and milk I can’t say I enjoy but it’s warm…

And then come the questions. And the stories, the many stories about the hard life here on the roof of the world. People missing husbands, children, they’ve all moved to Russia for a better life. Families not seeing each other for years on end. Or the family I stayed with with two daughters, the only ones surviving of the seven children they had originally…

Its high up too, the highest pass I’ve crossed is 4655meter! and I didn’t get below the 3000 for about two weeks, lucky I had some time to acclimatize properly since just before the first high pass I got ill and crashed at a family house in Jelandy with a bit of a fever. I slept for nearly 3 days straight and had some lovely nurses looking after me at the local hospital. It could have been the milk, either goat, sheep, cow, yak or fermented mare-milk. I’ve tried them all.
Back at the house I was shocked to see little Joangir, a baby only 6days old, left behind on the doorstep. Without question he was excepted into the family where he will now grow up. No one knows where his mum went. In the morning grandma tried the milk and noticed it’s gone off but happily continues to drink the lot (?)

With the area being so remote and only seeing some chinese trucks every now and then I got a bit worried about the night sometimes, but as a miracle, even if I’ve seen only one house all day, I managed to sleep at a house every night in the Pamirs. The last night, I already crossed the border out of Tajikistan but not into Kyrgyzstan yet, I found a yak farm. Where I got showed how to milk a yak and spend the evening watching american films dubbed in Russian, so you could just catch the first few words..

The toilet is always outside, a hole in the ground. But whenever i ask where the toilet is the teenage daughter takes me outside and just sits on the floor gesturing me to do so too. No shame left after staying here. Like when I stayed in Murgab and asked if there was a place to wash myself (didn’t have the opportunity for about 6 days) And the very friendly woman puts a bucket of hot water in the middle of the room and takes away the carpets… Don’t worry about the people walking in and out the house… ah well. At least I was clean again.

And then. Sary Tas. Kyrgyzstan.
I arrived rather early after crossing the easiest border so far. The border guards where still asleep when I came down the mountain half-frozen and didn’t even bother getting out of bed to put a stamp in my passport.
And there I had breakfast in a cafe with eggs! eggs and meat! I’ve had meat up the mountains as well, I’ve eaten yak and Marco Polo sheep, or so I’ve been told anyway…

But there I also got the news that the Chinese border would be closed untill the 8th. That was still 5days off and while I was wondering if I should hitch a ride to Osh or hang around I got invited to a house where I ended up staying the next 4 days. Nice and warm in the house. But unable to speak to anyone since both my Russian and my Kyrgyz is still non-existence.
I slept in the room with Babushka and the two sons. Babushka is 84 and can’t walk to the toilet at night so there was a chair with a bucket underneed she can use at night. So you wake up in the middle of the night from grandma having a pee next to your head.

Had a great time doing completely nothing at all and watching and being watched. On my 2nd day we killed a goat. Because when someone dies you kill a goat. Interesting how different a goat looks when you take away the skin and bones and put it in a bowl.
On the 4th day two neighbour girls came running :’Velociped! velociped!’ So I checked and yes, there parked against the cafe where two fully loaded bicycles!

I hurried in and was very happy to see Marie-Eve and Ludovic! A French couple I met in Samarqand before ( http://www.cyclopaysons.ouvaton.org ). Together we spend the last night in ‘my house’ enjoying a lovely bowl of goat-soup I already had for breakfast, lunch and dinner the past few days (water with fat tasting of goat)And we could talk! I could say something and they would understand and say something back that I can understand… that I missed, that and food… real proper food with ingredients and all of that. But apparently we could find this in Kashgar. So the next day we set off to the border.

It was the most difficult stretch of road I’ve cycled so far. We knew there was a pass to climb but we didn’t know it kept going up and down on a road so bad it was easier to cycle in the fields. A good lunch break in a traditional Yurt, drinking that mare-milk, and the absolutely stunning scenery made the bad road and freezing cold a little better. And being together. So different to cycle with others.

We arrived at the Chinese border the next morning just to late to cross into China, so we waited with a whole lot of truck drivers for the Chinese to finish lunch.
While we sat there another cyclist arrived and joined our party! Andreas, he came from Germany on his motorbike but changed his mind in Bishkek, got a bicycle and wants to cycle across Tibet as well. ( http://www.horizonsunlimited.com/tstories/naumann/ )

The four of us entered China together, all very exciting and new and beautiful!
Had some great food and slept together in someones house the first night, it felt like being at school camp or something, good fun. And we cycled through valleys with green and trees (!) and people smiling and the sun was shining till finally we arrived in Kashgar.
Kashgar, this name on the map I’ve been looking forward to so long.
In Kashgar EVERYTHING is possible. Kashgar is heaven… and yes… chocolate, peanut butter, crisps… but most important of all coffee!!!

And now I need to get my stuff sorted to continue. But not after lots of food, And trying to find some warm WARM clothes before heading for the hills again… you know, them ones we call Himalaya.

If you feel the sudden urge to support a Dutch girl on a pushbike, here is your chance!